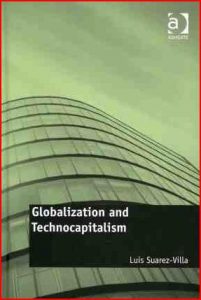 In this largely theoretical work, Suarez-Villa traces the emergence of a new form of capitalism: technocapitalism, and distinguishes it from its predecessors, mercantile capitalism and industrial capitalism. Mercantile capitalism was characterized by the exploitation of labour and slavery, the extraction of valuable resources from conquered lands, and commodity exchange. Industrial capitalism, on the other hand, relied on labour power and raw materials for factory-based mass production (and thus, also depended on imperialism, particularly in its inception, due to its need for the extraction of raw materials from around the world). Furthermore, mercantile capitalism and industrial capitalism primarily relied on tangible goods, whereas technocapitalism differs radically in its grounding upon technology and science, and its reliance on intangible goods: i.e., knowledge and creativity, and the way these are appropriated by corporations through the medium of research. Indeed, the corporate appropriation of creativity and its consequent commodification is regarded by Suarez-Villa as the trademark of this new form of capitalism. Throughout the book, almost too often to count, Suarez-Villa repeats the claim that creativity is the “most precious resource” of technocapitalism. His analysis is meticulously contextualized within a current global economic paradigm of neoliberalism, and the consequent destructive system of financialization, which is proposed as having been a dynamic and important force in the emergence and globalization of technocapitalism.

After providing an account of mercantile capitalism and industrial capitalism, and situating them within the current global economic context, Suarez-Villa moves on to provide a detailed analysis of the global phenomenon of technocapitalism itself. Firstly, technocapitalism “depends on new modes of accumulation and on a new ethos” (27). Unlike mercantile capitalism and industrial capitalism, technocapitalism operates in the context of technology and science. Further, the new accumulation modes are fundamentally based on the outcomes of “experimentalism” (27): i.e., the “technological and scientific inquiry whose overarching objective for being is commercial. It therefore involves experimentation for the sake of corporate power and profit, as opposed to experimentation for its own sake or for the sake of attaining new knowledge.” (118)

Experimentalism, as Suarez-Villa describes it, is characterized by three features: first, the active and strategic systematization of research, for example, through the setting of research agendas to maximize research potential, reduce uncertainty and risk, and ensure maximum corporate control. Second, the creation of new forms of corporate organization in accordance with experimentalism’s needs. Thus the corporate form is organized around the process of research and given the same status as production was given in the industrial corporate form. The third feature of experimentalism is its vital need for social mediation in order to exploit creativity, as creativity cannot be instigated or reproduced internally by corporate power, but rather is to be found within society itself.

According to Suarez-Villa, the context within which technocapitalism operates is further distinguished by three features. First, corporations are sources of power and domination over society, and not mere economic vehicles. Second, the global relations of power that characterize technocapitalism involve both the corporate commodification of creativity, and corporate dependence on the reproduction of this creativity. And, as Suarez-Villa frequently reiterates, this is a process that is fraught with risk and uncertainty, given that creativity is inherently qualitative in nature and its production is difficult and unpredictable, thus necessitating a control regime that gives rise to a number of pathologies and crises that are specific to technocapitalism; and third, these global relations of power also involve corporate control over public governance and over society generally.

Suarez-Villa ties technology intimately with capitalism in his analysis, and explicitly couches the discourse of technology within a political economic macro-analysis, in a critique levelled at a new order characterized by a ruthless neo-imperialist corporatism driven by technology and science. Suarez-Villa is not averse to technology per se so much to the manner in which it has been appropriated by corporate forces and the economic system of capitalism generally. Indeed, he warns of experimentalism turning “the world into its laboratory in order to be viable. Global society, all of humanity, life and nature therefore potentially stand to become guinea pigs of experimentalism and of the technocapitalist corporate apparatus.” (29) The global technocapitalist reality that he depicts has a dark and ominous tone. The opportunity to appropriate technocapitalism and its artefacts subversively for radical or emancipatory ends (as technofeminists might do), is hardly recognised, the discussion of it takes up no more than four pages. Suarez-Villa does acknowledge the positive potential of platforms such as Open Source in the sharing of new knowledge and the reproduction of creativity, but this is done in a brief and almost dismissive manner.

The most interesting part of Suarez-Villa’s book is his analysis of the inequalities and systems of domination that could be generated by technocapitalism in the twenty-first century, and its impact upon life and nature. Indeed, one of the most fascinating sections of the book involves the discussion of the detrimental effects of genetically engineered seeds and the special fertilizers they necessitate, which corrupt soils. These disrupt the food chain of many organisms and the ecological systems of which the natural seeds were an integral part; and this has ripple effects on entire nations and even continents. Small farmers are also pushed out by the suppliers of genetically engineered seeds, the biotech corporations. Further evils are elucidated as not merely spectres of a forthcoming dystopia, but as the reality of today with, for example, the outsourcing of clinical trials to the have-not nations, in a zoomorphic, instrumental reduction of human beings to guinea pigs in an effort to boost research potential, save time, and keep research costs to a minimum.

Further, the twenty-first century itself, in a manner reminiscent Virilio’s (2006) notion of the politics and violence of speed, will be distinguished by those who can master the process of “fast accumulation” of intangible resources bolstered by the Internet, the Web, and the cult of financialization (the haves), and those who cannot (the have-nots). Future wars could be fought over intellectual property, much as they were and still are fought over natural resources. Suarez-Villa warns that the inequities generated will be based upon the threat or the actual use of “fast militarism” (167), which encompasses speed, great violence, and the use of highly sophisticated technologies in a new “techno-military-corporate complex” (168). As Suarez-Villa writes about our impending future, in a paragraph echoing Orwellian discourses of constant surveillance and domination by apparatuses of power, and reminiscent of the futuristic, science-fiction dystopia of Andrew Niccol’s Gattaca (1997):

The dimensions of inequity and domination will be noticed through the new sectors associated with technocapitalism. Advances in biotechnology, nanotechnology, biopharmacology and other emerging sectors will be used to sustain the new global reality imposed by technocapitalism. Since many advances in these new sectors will have military and surveillance applications, they will likely enforce the new global order and its inequalities in ways that humanity has never experienced before. (145)

In his final chapter, Suarez-Villa does acknowledge the radical and emancipatory power of networks, particularly in subverting the current technocapitalist hegemonic order. Consider, for example, the radical potential networks have when appropriated by human rights activists, such as the role that Twitter and Facebook played in the Arab Spring. In the most insightful section of the book, Suarez-Villa also urges a reclaiming of the commons as a way to combat technocapitalism’s oppression. “The practice of real democracy, radical democracy, must seek to accumulate and mobilize the intangible resources (such as creativity and knowledge) that can reclaim the commons for the public domain, by helping us understand these new technologies and their effects.” (225-6)

The urging to reclaim the commons, and by proxy, technology and science from capitalism’s grasp might, however, attract criticism from those who argue that it is only through capitalism that technology has had the opportunity to evolve so rapidly to its present state (Mossberg, 2007). In the area of stem cell research, for example, Suarez-Villa’s position is questionable given that the possible benefits of stem cell research include advances in the treatment of cancer, diabetes, Alzheimer’s, Parkinson’s disease, muscular dystrophy and spinal cord injury, etc., not to mention the further potential health benefits that biology and technology could have. Capitalism’s grasp of technology and science within this context seems less questionable when one is considering the alleviation of human suffering as expediently as possible. Whether, ultimately, the suffering that capitalism inflicts will outweigh the suffering it could ever potentially alleviate is a philosophical debate beyond the purview of this review. Ultimately, however, Suarez-Villa’s criticism of the ruthless corporatocracy that embodies the new technocapitalist era, and the vicious culture of “competitism” (175, 226, 227) – i.e., competition, and the social alienation and damage to the environment it has caused – cannot be disputed or ignored.