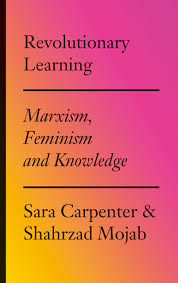 Kirsty Capes is a PhD candidate at Brunel University London. Her research focuses on …

This collection of six essays is a combination of Sara Carpenter and Shahrzad Mojab’s previously published works on Marxist feminist approaches to adult education, alongside new material that offers a critique of the pedagogy of adult education from an anti-racist, anti-imperial tradition. The book approaches ways to understand capitalist-imperialist social relations in the context of critical, reflective learning. Carpenter and Mojab’s work on radical pedagogical attitudes to learning has spanned a range of intersectional approaches; Mojab’s research on anti-racist, colonialist and imperialist practices in conjunction with Marxist feminist critical theory, within adult learning, is particularly notable in this regard. This new collection of papers demonstrates first the problematic nature of a dogmatised teaching, which relies on ideology and does not employ critical ‘conceptualizations of learning and its relations to consciousness’ (13). Following this, the text outlines the implicit dialectic of patriarchy and capitalist social relations, and their relationship with adult education. The argument for ‘revolutionary learning’ is born of Lenin’s twofold theorisation of the ‘proletariat’s responses to the abuses of capital’ (54) in his 1902 pamphlet What Is to Be Done?. It centres Marxist-feminist and feminist-materialist frameworks in an effort to develop revolutionary learning practices, which are collective, reflective and interrogative; that ‘neither entrench the individual in abstract universalism nor detach them from the material and cultural relations of life’ (73).

The introduction to the text is cemented in the writers’ own praxis: their experience and understanding of the shifting definitions and problems of ‘critical education.’ As educators, they have seen students struggle with theoretical application and abstracted learning: ‘they are often left with a tenuous ability to understand social relations, including their own lives, as the result of dynamic contradictions in our social, cultural and material world’ (28). There is a sense that this is a contemporary problem, and this is something which pervades other portions of the text (particularly Chapter Six on understanding capitalist imperialism), perhaps borne of the progression of late-stage capitalism in every aspect of human life, whereby ‘the only way people can access their basic needs is through the market’ (7). A commodification – and fetishisation – of human interaction and social relations has created an illusion of human independence, as well as how we experience capitalist relations, and indeed, learn. The role of the feminist educator, Carpenter and Mojab determine, is to ‘[contend] with the complexity of abstraction in which we live’ (8). Thus, revolutionary learning necessarily requires a Marxist scholarship which is fundamentally underpinned by feminism and anti-racism, or otherwise risks being ‘itself sexist, racist, and, at this historical moment, deeply inadequate to address the condition of life on this planet’ (4).

The essays begin with one that describes the writers’ own approaches and understanding of what it is to be ‘critical,’ and how the ‘critical’ is entrenched within education theory. Applying historical materialism, Marxist-feminism and anti-neoliberal discourses to teaching makes education revolutionary, and scholarship and teaching ‘forms of activism’ (29). There is some interesting discussion of the differences between ‘critique’ and ‘being critical’; whether one is simply describing ‘the contours and realities of our conditions,’ or going further to ‘question the pretences of power’ (33) in relation to a social problem. Further to this, the writers ask what is offered by the two differing perspectives, and indeed what is useful when it comes to critical education. They argue that critical education ought to delve deeper still into the pedagogical purposes of being critical, that it ought to ‘explain the source, function, expression and operation of the contradictions that constitute our social relations’ (33). The chapter goes on to contextualise this kind of critical education in history, drawing on the works of Freire, DuBois, Fanon, Guevara and more to demonstrate the historical revolutionary praxis of these figures, and their contribution to the Marxist, anti-colonial projects from which the writers now draw. Carpenter and Mojab highlight the contribution of socialist-feminist scholarship to the ongoing ‘critique of the social relations of reproduction,’ developing spaces where ‘women could collectively articulate the conditions of violence and subordination that characterize the universal relations of patriarchy in local contexts, resulting in extensive form of patriarchal relations’ (35).

Restating the problems that students face in terms of answering epistemological questions about the relationship between what they know and the source(s) of their knowledge, the chapter titled ‘Learning and the “Matter” of Consciousness in Marxist Feminism’ focuses on ‘an exploration of the relation between consciousness and the material world from the perspective of Marxist feminism’ (45). Carpenter and Mojab begin with a discussion of their late mentor Paula Allman’s thesis that Marxism – in particular, Marx’s theorisation of consciousness – is essential to both the study of critical education theory and the understanding of education’s role in ‘the reproduction of labour and capital social relations’ (46). The writers explore various criticisms of Marxism, including the Young Hegelians’ ‘emphasis on the “absolute” ideal’ (48) and Allman’s argument that ‘Marx’s theory of consciousness cannot be understood as anything other than a philosophy of praxis’ (50). The writers use Lenin’s distinction between ‘two types of consciousness and two movements, working-class and social democratic (communism)’ (55-56), and his analysis of the strategic development of the Russian revolution, to demonstrate that ‘socialist consciousness requires […] knowledge of theory as well as sciences which should be brought into the working-class movement by socialists’ (55). The writers identify an intriguing parallel between Lenin’s work and Vygotsky’s education theory of the historical and theoretical link between the ‘everyday’ and the ‘scientific’ (57). Thus, the development of a revolutionary learning is dependent firstly upon the spontaneous rebellion of the working class, facilitated by the hegemonic, organised activities of political parties, giving rise to what Gramsci called ‘organic intellectuals.’ Concluding, the writers identify the parallel goals of Marxism and feminism, and ask ‘do we promote a consciousness aimed at creating a new world or do we train citizens skilled in reproducing the status quo?’ (68). The answer seems obvious and overwhelmingly political.

The writers delve into explicitly feminist theorisations of adult education, drawing from feminist materialism to post-structuralist feminism. The latter, they say, is relied upon in adult education, leading to a rejection of Marxism and an emphasis upon positionality. A feminist materialist framework cemented in Marxist feminism, by contrast, ‘adds a necessary dimension to ongoing debates concerning the individual, the social, experience, learning and consciousness’ (73). The reiteration that ‘the social formations of race, gender and class are dialectically related social phenomena and cannot be disarticulated from one another’ (74) – that ‘race is sexed, gendered and classed, class is sexed, gendered and raced, sex and gender are classed and raced’ (85) – is, albeit reductively, the central thesis of the book, and the arguments put forward are coherent and persuasive in advocating for a kind of revolutionary learning which tackles all of these with equal weighting in attempts to promote revolutionary consciousness: ‘experience must be situated with a historical analysis of capitalist social relations in order to engage in resistance and transformation’ (85).

Institutional ethnography is championed alongside, and in keeping with the preceding arguments, the kind of revolutionary learning which emerges from political and non-political social struggle. Discussing Cultural Historical Activity Theory (CHAT), a popular approach to learning in critical education, Carpenter and Mojab criticise the theory for ‘mis-understanding and de-historicising Marx’s theorization of capitalism introducing the concept of activity’ (95). The writers put forth a cogent argument regarding the nature of abstraction in learning, arguing that idealist enquiry – identified by Marx and Engels as ideological ‘in the sense that it relies on abstractions from social reality to generate its claims’ (97) – using theoretical frameworks skews understanding, as it actively negates praxis to generate theoretical concepts. Carpenter and Mojab argue that institutional ethnography ‘directs research towards social phenomena existing below the surface of appearance’ (105). Ideology-driven praxis, in relation to critical education, does not allow for larger discourses regarding social relations, experience and the location of the individual within these. The writers successfully draw on the work of Dorothy E. Smith to support this. They see the social as ‘the co-ordination of ongoing human relations and activity’ (107), which, by definition, does not conform to any type of ideological framework. This is the crux of the book’s thesis, and it is articulate and convincing, particularly in its consideration of Marxist feminist understandings of consciousness.

The final chapters of the book discuss, respectively, the advancement and (often contradictory) understanding of imperialism in a critical education context, and a case study of democracy promotion through critical education in Iraq. The discussion on imperialism’s impact on race, class and gender relations; its nature as expansionist and a symptom of antagonistic late-stage capitalism; and its ‘implication for any theorization of critical education or critical forms of consciousness’ (118) is lucid and articulate. With emotive examples of imperialism’s horrifying impact in the Global South, its contemporary affiliations with religious fundamentalism in the post-9/11, so-called ‘war on terror’ era, Carpenter and Mojab provide a comprehensively damning indictment of imperialism’s insidious impregnation of and normalisation within critical education discourse. While much of the book is linguistically difficult, with arduous theoretical discussions dominating the majority of the narrative despite an emphasis on praxis, ‘Capital Imperialism as Social Relations’ is refreshingly focused on practical methods of resistance within the pedagogy of critical education, and advocates for critical education to be ‘a powerful force in creating a new world free from exploitation, oppression and destruction’ (126).