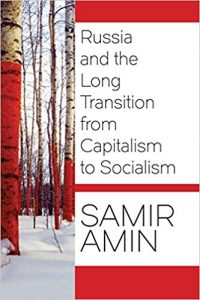 Samir Amin
Russia and the Long Transition from Capitalism to Socialism

Brant Roberts is based in Houston, TX. His writings have appeared in Marx & Philosophy Review …

Samir Amin’s Russia and the Long Transition from Capitalism to Socialism is a collection of essays written between 1990 and 2015 on Soviet and Russian history. Although the essays are scattered across different periods, the book still manages to follow an analytical progression. The book also includes Amin’s analysis of the political crisis surrounding Russia and Ukraine, and questions how the histories of the Soviet Union and Imperial Russia have been presented to the public. Although the book is relatively short, it is packed with contents that carry many historical and political implications.

At first glance, the title of the book might appear to be backwards, as the socialist Soviet Union no longer exists and the capitalist Russian Federation has been deemed to be its successor on the world stage. However, it is from this juncture that Amin asks the reader to look towards the future as a way to analyse the present in comparison with the past, rather than looking back at the past in order to better understand the present and the possible future. In short, the author’s aim is to juxtapose the future of communism (as a higher mode of production) against the present in comparison with Russia’s past.

In the first chapter Amin opens with a world historical analysis, situated from 1000 to 1500 A.D., in regards to the Eurasian (which he defines as spanning from Poland to Mongolia) relationship with the three most advanced civilisations of the time: China, India and the Middle East. His analysis of the period is focused on the development of these tributary (pre-capitalist) civilisations, which surround Eurasia, and it provides the backdrop to the entrance of the Muscovite state from 1250 to 1500. In doing so, he separates Russia’s economic development from Western Europe and compares it more with the rest of Asia.

In the second chapter Amin compares how the formation of imperial Russia (Belarus, Central Asia, the Caucasuses and Ukraine) has been historicised versus how the formations of France and Great Britain have been historicised. It is here that he begins to point out the double-standards between the Western narrative of Russia and its actual formation. The Western narrative asserts that Russia’s control of these regions was “a black history, governed by extreme violence alone” (26). On the other hand, Amin’s narrative is much more objective as he claims that it was no more violent or culturally hegemonic than Great Britain’s conquering of Scotland or France’s conquering of Occitania. With this framework in mind he then asks why it is that, according to the media, Ukraine’s independence was deemed a correct political move but Scotland’s vote on whether or not to leave the United Kingdom was blasphemy. This clear double standard is a product of what Amin refers to as the ambitions of the collective imperialism of the Triad (European Union, Japan and the United States).

Amin’s analysis is not without merit as it was advantageous for the Triad to see the Soviet Union broken up so as to gain influence in its former republics and for the European Union to have a foothold in the Baltic republics and, as of recently, in Ukraine. This allowed new surpluses of labour to be exploited for global capitalism and for the newly unemployed masses to be thrown into the reserve army of the unemployed. Geopolitically, it was important for the Triad to maintain their unity (Scotland within the United Kingdom) rather than follow the same logic for the former republics of the Soviet Union.

Amin saves his analysis of the Ukraine crisis for the last chapter of the book as he lays out the geopolitical reasons for why the Euro-fascist revolution took place and the consequences it poses on Russia. He lays out the long history of the Triad’s backing of different types of fascists in the Global South from dictators like Porfirio Diaz to reactionary theocratic movements. These forces serve as willing client states for the Triad so long as they are allowed to carry out their reactionary agendas. Ukraine’s political class is no exception to this history as Amin has pointed to the presence of fascist militias being allowed free reign and some inclusion into the public security forces since the Orange Revolution. The consequences have drawn considerable backlash from Russia’s political class and have, according to Amin, forced them to back separatists in Eastern Ukraine and annex Crimea.

This book is not only about the geopolitical implications of contemporary Russian politics; it is also Amin’s critique of the Soviet system, by which he refers to both its political and economic formation, and how his analysis of the system shifted from the 1960s to 1991. For Amin the Soviet system had five characteristics that defined its structure: corporatism, autocratic power, social stabilisation, economic delinking from the global capitalist system, and its integration as a superpower. ‘Corporatism’ refers to the corporate structure and class dimensions within the state enterprises and the gradual loss of political consciousness among the Soviet working class. While the Russian working class had been among the most radical in Europe prior to 1917 it had become one of the most pacified working classes by 1991 due in large part to the corporatism that had become ingrained within the Soviet system. Amin doesn’t mention that this process was largely due to the public ownership of the means of production, which implies that the workers did not have the same reasons to rebel, and that it was this factor that accelerated the corporatism.

The reader may be left asking what Amin’s alternative is. In his answer there were two socialisms. The first (Socialism I) lasted from the nineteenth century to 1914, while the second (Socialism II) of the Third International and Leninism has long passed. The alternative (Socialism III) that Amin expects to liberate the masses of the Global South (including the former Soviet Union) from capitalism emphasises: creating alternatives rather than catching up with the West, delinking from the global economy, and creating a polycentric world.

Amin’s historiographical trajectory will come off as unorthodox to those who have never read his work before and he takes his approach even further in his comments on whether or not the revolution experiences a Thermidor period. Like Leon Trotsky, most Western historians (such as Sheila Fitzpatrick) claim that the purges of 1937-38 are the Thermidor. Amin pushes against this notion by pointing out that the question of a Thermidor as a restoration is not applicable to Soviet history. His understanding of a Thermidor is that of a moment when political stability is achieved. He goes on to point out that Gorbachev and Yeltsin signalled the beginning of the restoration period but never explains what the Thermidor would be in the Soviet case. There are many instances which could signal a Thermidor, such as the NEP period, the first five-year plan, or the purges. Unlike any of his other points in the book Amin leaves this question up to subjective speculation.

The fact that a great deal of Amin’s knowledge of the Soviet Union is based on decades of discussions with many Marxist intellectuals cannot be taken lightly. His book is a breath of fresh air in the face of rising Russophobia and misinformation, but it contains two ahistorical references. The claims cited below do not detract from his thesis, nor from his main points; nevertheless, it is necessary to criticise these claims.

My first criticism is that when discussing Soviet history in chapter 3, he claims that: ‘In the 1960s, a plan of aggression against China was initiated with the overt goal of dismembering China and dividing it between the USSR, Japan, and the Western powers.’ (62) There was a great deal of political strife between China and the Soviet Union but this uncited claim is a surprising point to say the least.

A second critique to be made is that in correctly pointing out that the British were a violent, colonising force in Ireland, Amin attempts to show that the Russian state did not promote similar tactics in the Baltic republics. While this claim is certainly true under Imperial Russia, as they protected the traditional landowning classes and allowed their subjects the same rights as Russians, he attempts to negate the Soviet invasion of these countries during the interwar period as if they willingly joined the USSR. Immediately following his point on the British in Ireland, he writes: ‘Later, the Soviets restored the fundamental rights of the Baltic republics, permitting the use of their own languages and the promotion of their own cultures.’ (28) It is possible that Amin forgot to mention this detail but this should be pointed out in order to avoid the type of ahistoricism that he accuses other historians of.

My final critique concerns the geopolitical implications of Amin’s approach. Although he sees a great threat in the Triad, his approach comes off as following the logic of: the enemy of my enemy must be my friend. Therefore, Russia’s geopolitical manoeuvrings can be justified due to their status as a buffer state in the United Nations Security Council, in Syria and in Ukraine. This leaves little room for a Marxist critique of such positions and pushes the international Left into choosing sides between Russian oligarchs or the imperialist Triad.

Considering the current geopolitics of Russia and the centennial of the Russian revolution, Amin’s succinct analysis is refreshing and timely. The book allows readers a different historiographical perspective to utilise when discussing modern Russian history and the path it began to pursue 100 years ago. In his analysis, what inevitably lies ahead for Russia is a breaking point with the neoliberal world order that signals either: moving towards delinking and building a higher stage of civilisation or becoming another peripheral state within the global system. Amin poses the urgency of the dilemma: ‘More than ever, the choice we face is not capitalism or socialism, but socialism or barbarism.’ (67)