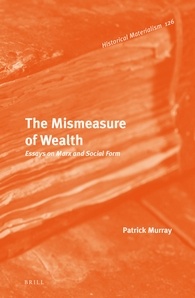 Patrick Murray
The Mismeasure of Wealth: Essays on Marx and Social Form

To say it upfront: Patrick Murray’s book belongs to the very best Anglo-American Marx scholarship. Although, with the exception of the introduction and chapter 6, the book contains chapters that have been previously published, seeing these 19 essays collected in one place is a pleasure, as the collection showcases Murray’s work as it has been produced over the span of several decades. In addition, it demonstrates his impressive scholarly discipline regarding Marx and the concept of value. In short, the book is an example of the highest standards of academic work; although at times painstakingly obsessed with details, it is always put forward with exceptional clarity and clear arguments. Murray’s familiarity with and command over the primary texts is truly inspiring and is far from speculative or “postmodern” readings: every claim is backed up with textual evidence and, overall, Murray displays a hermetic sensitivity to the network of textual relations that remains unmatched in contemporary research in the Marxian concept of value.

Throughout the book, the reader also finds critical engagements with other scholars in the same field, such as general critiques of Kliman, Arthur, and Dussell (whom Murray accuses of “abstract humanism” (515)), as well as very specific responses to articles written by other Marx scholars, such as Furner and Reuten. Themes that run through his massive text include the Marx-Hegel relation, the Marx-Bailey relation, the nature of value, Marx as a critic of economics, the concept of social form, as well as the critique of abstract and one-sided readings of Marx’s theory. In addition, Murray argues that Marx should not be conceived as a left Ricardian, that abstract labor should be conceived of as what he calls “practically abstract labour”, that in Marx’s theory wealth is a definite social form, that we need to develop “shadow forms” of value and capital, and that we need to further differentiate Marx’s concepts of formal and real subsumption by adding “hybrid” and “ideal” subsumptions to the picture.

The center of the entire text is Marx’s concept of value, and Murray runs again and again through the first chapters of Capital and its preparatory material from the late 1850s and 1860s, in order to force even the last “naysayer” of Marxian philosophy to a better understanding. As the author nicely puts it, “for Marx, value is a problem, a monster of a problem” (403). All chapters in Murray’s remarkable book have more or less the purpose of enlightening us about this “monster,” and, in fact, after almost 600 pages, it is safe to say that the author successfully chases, struggles with, and, finally, contains the “monster” that Marx has left to 150 years of scholarship.

Overall, one could say that Murray defends a philosophical reading of Marx and the concept of value that, although it cannot be done without economics and sociology, tries to demonstrate the limitations of “abstract” readings of Marx that do not do justice to Marx’s claim that in the end production, distribution, and exchange cannot be separated from each other – and, in addition, that all of these moments cannot be separated from a theory of society as a whole. Although Murray avoids the language of Critical Theory and 20th Century Marxism, the underlying assumption of Marx’s theory as a theory of the “whole” remains the guiding clue for Murray’s thinking about Marx and value. As Murray puts it in relation to economic terms: “value form theory maintains that neither the value nor the magnitude of value of a commodity is constituted independently of its sale; put more generally, neither value nor the magnitude of value are constituted independently of money and the circulation of commodities” (427). And related to production he says that “Marxian value-form theory holds that value and the magnitude of value are co-constituted in production and circulation” (427). Consequently, Murray argues against economic readings of Marx that operate with abstractions, i.e., those that depend on claims that value is either solely based on production or on exchange, that distribution can be separated from production, or that money and value can be separated from each other.

Finally, it is astonishing to see that Murray rarely mentions the concept of fetishism, except in the introduction and in chapter 14, which deals with the “illusion of the economic.” Although Murray, in my view, correctly claims that fetishism necessarily belongs to the concept of value and, accordingly, he takes fetishism to be an objective concept (41), one wonders whether he underestimates its role in a theory of social knowledge. Although value is not a subjective concept, it cannot be pushed out of epistemology, insofar as social knowledge about the social form of the capitalist mode of production must itself be part of this social form.

In sum, the book’s strength is at the same time its weakness, insofar as the book’s strength is an impeccable and ingeniously close reading of Marx and the core concept of value. However, as a consequence, this leads to a reading of Marx and his critique of political economy that remains totally untouched by anything developed in philosophy after Marx. Murray’s book offers hermeneutics at its best and we should all learn from it, but one is left wondering how his reconstructions can be merged with our contemporary philosophical horizon.