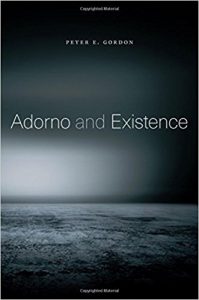 Adorno criticises Kierkegaard, Husserl and Heidegger for what Peter Gordon calls their ‘philosophy of bourgeois interiority’ (14) – a philosophy that is seen to find expression in existentialism – and it is judged by Adorno as a nostalgia for the subjective as a source of unitary meaning. It seeks a recuperation of the prelapsarian self amidst its apparent decline. Adorno, whilst acknowledging utopian yearning, rejects the philosophical and ideological cul-de-sac to which this leads, and finds a through-road in the writings of Beckett and Kafka and a qualified rapprochement with Kierkegaard. This is the trajectory that Peter Gordon follows, and which he sets out in a chronological manner, in his Adorno and Existence.

Adorno’s Kierkegaard: Construction of the Aesthetic focuses on Kierkegaard’s idea of inwardness (Inerlichkeit), regarding it as an attempt to batten down the hatches against the windy forces of history; a forlorn endeavour that only succeeds in revealing its own historical conditions. Adorno traces in Kierkegaard’s early work images of the bourgeois home as a citadel of privacy, and discerns the metaphoric value of these images as an ahistorical temporal point that would still the tumult knocking on parlour doors. For Adorno, their poetic power represents an ideological tranquilliser; for Kierkegaard, who seeks liberation from the noisy realm of the ‘crowd’, the physical interiority of the home forms a correlate for the kind of preparedness he deems necessary for spiritual redemption. Adorno’s critique of Kierkegaard is not a hatchet job – there is a bond of sympathy that undercuts the polemical intent – and Adorno writes how the Danish philosopher ‘recognised the distress of incipient high-capitalism’ and ‘opposed its privations in the name of a lost immediacy that he sheltered in subjectivity’ (27). At the same time, to signal the escapist mentality of merely seeking shelter, Adorno considers the image of mirrors positioned so as to reflect views from windows in the interiors of nineteenth-century apartments. Such a mirror allows for a projection, into the living room, of a semblance of the external reality that it happens to capture by its positioning on the wall opposite a window. Adorno singles it out as a symbol of the way Kierkegaard looks privately and inactively on the world, not engaging with its economic and political veracities but remaining isolated by a solitary and bourgeois subjectivity.

The possibility that the impulse to withdraw could harbour a social critique, and that repulsion from the crowd could signal a precocious fear of mass control, is noted identified by Gordon when he quotes from an Adorno lecture on Kierkegaard in 1940: he ‘heard those loudspeakers which filled the Berlin Sportsplast one hundred years later’ (32). In the lecture, a worthy emancipatory force is detected in the utopian hopes that accompany the absurdity of authentic Christian belief when it is pitted against an all-too worldly Church. In an unlikely marriage of messages, the existentialist thrust of Kierkegaard’s faith is seen by Gordon to chime with one of the famous dispatches from the end of Minima Moralia: ‘Even its own impossibility it must at last comprehend for the sake of the possible.’ (36)

The Kantian prioritising of the mind’s structuring of sense-based data is genealogically linked by Gordon with Adorno’s lifelong objection to and his criticisms of Kierkegaard, phenomenology and Heidegger. In particular, a bloodline is sketched from Adorno’s critique of Husserl’s perspective, founded as it is on the primary role of the subject, to the ontology of Being and Time. Notwithstanding Heidegger’s insistence on a nonsubjective realism, Adorno regards a view of existence that treats the latter in terms of a timeless facticity as a retreat from materialism. From this point of view, phenomenology and positivism are alike in encouraging descriptions of the given, as in the natural sciences. Mere facticity ignores the rifts and discontinuities of being; for Adorno, meaning cannot be fixed and, as he puts it, there are only ‘changing constellations’ (45) that interpretative activity brings momentarily into the light. Adorno is convinced that Heidegger’s ontology fails to remove the blinkers of phenomenological idealism, despite holding out the promise of a realism free of subjectivism. With the notion of ‘thrownness’, time is ontological and outside of history.

Adorno’s attack on phenomenology is the subject of his Against Epistemology, a book he wrote while marooned in Oxford after his forced emigration from Nazi Germany. Gordon unpacks the central idea in this difficult work, most readily comprehensible in the image of the phenomenologist as being like an early photographer whom Adorno describes as wrapped with ‘the black veil of his epoché’, imploring his subject ‘to hold still and unchanging’ (68). As with the earlier use of the image of the window and mirror, the simile encapsulates the bourgeois viewer’s emasculation of the object’s dynamic independence by enclosing it within a recording device: ‘just as in photography the camera obscura and the recorded pictorial object belong together, so in phenomenology do the immanence of consciousness and realism’ (69).

Gordon reads Against Epistemology’s critique of phenomenology as a preliminary and exploratory text for reflections on the limitations of idealism that would be developed in Negative Dialectics, published in 1966. Three years earlier, with the publication of The Jargon of Authenticity, Adorno returned to attacking existentialism as a form of secularised religion, worshipping not a god but existence itself. Dasein, he argues, relates only to itself and its self-affirming ‘mineness’ and breeds acquiescence in the status quo, becoming a reactionary, philosophical equivalent of identity politics. Had he lived to observe the cultural sovereignty of the ‘selfie’, it could have completed for him a triptych of images – alongside his references to the window mirror and the early photographer – representing the effacement of a distinction between subject and object.

The work of Samuel Beckett, by refusing to turn senselessness into the meaning of life, provides Adorno with a more penetrating response to the contingent nature of existence. Existentialism seeks and finds heroism in the authenticity of the moral individual trapped within an absurd universe, but Beckett is seen to debunk this by eschewing any consolation that might derive from elevating meaninglessness into a doctrine for virtuous living. The allure of comfort is undermined because the very idea of a selfhood, a humanist individualism, as being the putative basis for philosophical truth is denied credibility in Adorno’s eyes. In ’Trying to Understand Endgame’, he sees in the utter ruin depicted by the withered figure of Hamm ‘the inner realm of his own subjectivity’ (111). There can be no philosophical mileage in Hamm’s predicament, nothing can be milked from disenchantment or by valorising the human condition; existentialism is reduced to a mystification of social meaninglessness in a postlapsarian age of the Holocaust and nuclear weapons. The disaster is not of an ontological kind but historical, locatable in Auschwitz and the Manhattan Project – names embodying the self-inflicted apotheosis of instrumental reason. What truth there is remains unthinkable, for the present, given the way that in art, as Adorno puts it, ‘there are no longer standpoints from which the catastrophe could be named.’ (107)

In Negative Dialectics Adorno attempts to overcome idealism, arguing for the primacy of the object beyond its conceptualisation by the subject. He sees Heidegger as having failed, despite his avowed aim of returning to Being its due metaphysical importance, in attempting to go beyond the idealist hurdle. The failure is partly attributed to Heidegger’s espousal of Being as transcending its appearance in the world, endowing it with a Platonic and almost sacred grandeur. Being becomes nonconceptual, beyond predication, and an invariant feature of his philosophy, writes Adorno, is ‘to revalue every lack of content, every non-possession of cognition, into an index of profanity.’ (137) Borrowing Benjamin’s idea that aura has its origins in religious ritual, Adorno sees in existentialism the sacrilisation of existence, a worshipping of the given at the expense of understanding reality’s changing historical and social contours.

Adorno and Existence is an expansive and ambitious undertaking and Gordon deserves praise for elucidating the dense constructions of Adorno’s texts, especially in the often elliptical prose of Negative Dialectics. He traces a constant concern in Adorno, from the 1930s onwards, to associate the ontology of existentialism with idealism while also acknowledging an underlying value in idealism’s resistance to the merely given. In anthropological terms, Adorno locates idealism’s origins in the human need to transform and restrain its feral nature by forging hospitable horizons of meaning that ultimately lead to the dialectic of enlightenment.

Adorno’s alternative, negative dialectics, seeks to affirm materialism and preserve the subject as a source of resistance to the identity of thought and the world. Adorno endorses what he calls the ‘“inverse” theology’ (174) of Benjamin’s reading of Kafka – regarding it as a means of avoiding the religious supernaturalism of Kierkegaard – and looks to his short story, ‘The Cares of a Family Man’, that features the uncanny creature called Odradek. Immortal and without purpose, Odradek is ‘a motif of transcendence’ but only as ‘the reflex’ of a wounded existence that lives on as ‘a life that is perverted in thingly form’ (178). This overlaps with Marx’s understanding of religion as ‘the sigh of the oppressed’ but in Adorno and Existence Odradek also embodies the possibility of an escape from existential hopelessness by way of a negative dialectic. He is inhumanly human and as such, as Gordon postulates the inversion, he ‘bears witness as a photographic negative to a happiness we have been denied’ (179). The proximity to wretched despair in Kafka serves as the only available means of creating a space for the envisaging of happiness. Here, Gordon’s exegesis itself proves a little elliptical and the reader is left wanting further explanation.

Adorno’s abiding interest in Kierkegaard remains ambivalent in its nature and this is the subject of the final chapter in Gordon’s study. The Dane misunderstood the importance of contradiction for Hegel but Adorno comes to value Kierkegaard’s resistance to the reconciliation of the subject with society; it carries an anti-neoliberalism charge: ‘The absolute being-for-oneself of the Kierkegaardian individual is devised against the absolute being-for-another of the world of goods.’ (188) In the posthumous Aesthetic Theory, Adorno sees this ‘being-for-oneself’ as a form of subjectivity that is necessary if art is to retain its credibility but, as with his earliest reflections on the subject, he finds fault with the way Kierkegaard allowed this to support bourgeois ideology.

Gordon concludes his elegantly composed study with a reminder that Adorno’s rapprochement with Kierkegaard did not soften into an affirmation or endorsement of religious belief. By refusing to take a leap of faith but valuing the negativity that impelled it, Adorno stays outside the camp of modern theology. His loyalty remains steadfastly with what Odradek represents: a distorted creature that negatively mirrors the distortion of the world; a persistent materialism that also allows for something transcendent. Only in this way, Adorno is saying, does it remain possible to imagine an absolute transformation of the material world.