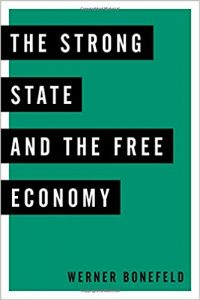 Werner Bonefeld
The Strong State and the Free Economy

Reviewed by Charles A Prusik

Charles Prusik received his Ph.D. in philosophy from the Department of Philosophy at Villanova …

Too often, the term ‘neoliberalism’ is used to describe everything from the financialization of global capitalism to the declining power of the state. For many, neoliberalism has come to mean a revival of the classical doctrine of ‘laissez-faire’ economics––i.e., the idea that competitive markets are liberated through the weakening of the state. Werner Bonefeld, however, in his The Strong State and the Free Economy, argues powerfully that neoliberalism is a political project grounded in a strong state. A free economy, he argues, is built through a state that protects itself from democratic interests and imposes an order of economic liberty on society. Through detailed historical analyses of the German ordoliberal tradition (the predecessor to neoliberalism)­, which included figures like Walter Eucken, Alfred Müller-Armack, Franz Böhm, Wilhelm Röpke, and Alexander Rüstow, Bonefeld situates this poorly understood body of thought in the context of its emergence in the Weimar Republic, and traces its influence on the formation of the European Union.

Rather than defining the state by its relationship to the economy––or the economy by its relationship to the state––ordoliberal thought stresses the immanent interdependence of a free economy and state interventionism. Ordoliberalism assigns the state the foundational task of serving as “market police” by securing competitive economic institutions against democratic processes (3). The Strong State and the Free Economy develops as a sustained engagement with this body of economic thought; Bonefeld derives crucial insights regarding the neoliberalism of the contemporary period, the crises of the Eurozone, and why today’s global capitalist order entails a political practice, as well as a logic of sovereignty.

By situating the development of ordoliberal thought in the context of its origins in the Weimar Republic and the global crisis of capitalism of the 1930s, Bonefeld’s critique goes further than Michel Foucault’s Birth of Biopolitics (1978-9) in clarifying the specific form of political practice the construction of a social market economy requires. Against the classical liberal doctrines of ‘spontaneous emergence’ and ‘laissez-faire,’ ordoliberalism sees competition as an unstable mode of social organization. For thinkers like Müller-Armack and Böhm, laissez-faire liberalism cannot prevent the state from becoming “the powerless servant of interest groups and illiberal parliamentary majorities” (22). The crisis of laissez-faire capitalism, they argue, is a crisis of “mass proletarianisation,” brought on by the antagonistic form of class society. In the absence of a strong state, the sphere of capital disintegrates under the pressure of proletarianised masses. A competitive market society therefore requires a politics of “order,” predicated on the sovereign power of the state to defend private interests against parliamentary majorities. The ordoliberals maintain that a “free economy amounts to a politics of order (Ordnungspolitik)” (22). Order is a political category; government is responsible for constructing and defending the legal parameters of free competition, for preserving the function of the price system, and for fabricating a socio-moral context of entrepreneurship and competition.

Given their emphasis on state power as the key to securing economic freedom, it is unsurprising to discover that ordoliberalism derives many of its core notions regarding sovereignty from Nazi jurist, Carl Schmitt, whose political theology defends the state’s right to replace parliamentary decision making with an authoritarian state. According to Bonefeld, the ordoliberal analysis of the crisis of the Weimar Republic drew its intellectual resources from Schmitt’s critique of liberalism and mass democracy. “Like Schmitt,” Bonefeld writes, “ordoliberals identified mass democracy as a danger to free economy because it emasculates the independence of the state and makes government accountable to the interests of the governed” (47). Against parliamentary liberalism, ordoliberals endorse Schmitt’s defense of the “state of exception,” authorizing governments to suspend the rule of law during a state of emergency (49). For Schmitt and the ordoliberals, democratic rule tends towards a “state of pure quantity,” characterized by the disunity of pluralistic interests, welfare protectionism, and the state’s incapacity to distinguish between the “friends of liberty and its enemies” (49). A state of “total quality,” by contrast, establishes the independence of the state from society­––it is the independence of the state from society that defends the free economy from mass proletarianization. Ordoliberalism, therefore, is not only a critique of laissez-faire economic principles, but also a critique of democratic self-rule. Against democratic majoritarianism, ordoliberal politics defends a politics of ‘liberty’ grounded in the right of the state to sustain a competitive order.

In contrast to the classical liberal economic thought, which stresses the objective, law-like, or ‘natural’ properties of economic competition, ordoliberalism insists that a free economy is a politically constructed order rather than the emergent outcome of individual transactions. Moreover, “complete competition,” they argue, “is as much a social category as an economic one” (81). An enterprise society presupposes depoliticized social relations, a morality of entrepreneurship grounded in property rights, as well as conservative values that stress the virtues of responsibility, individuality, and self-reliance. Bonefeld is careful to delineate the distinction between classical liberal and Keynesian notions of society and the ordoliberal notion of a “social market economy,” which aims to integrate traditional moral values with the marketization of society. Müller-Armack, in particular, argues that a free market is social because increased labor productivity leads to a greater demand for labor (104). Anticipating core aspects of the supply-side economics of the Reagan and Thatcher era, the doctrine of a social market economy places the burden of economic growth on the dynamism of competition; social welfare and policies of unemployment become unnecessary as productivity lowers prices, thereby increasing demand and broadening the freedom and flexibility of labor markets. As Bonefeld writes, “the ‘social’ element of the market economy has therefore a distinct meaning: it is premised on economic growth, connects market freedom with individual responsibility, sets out to reconcile workers with the law of private property and delivers society from proletarianised social structures, promoting enterprise as a character trait” (104).

Ordoliberal social policy moves beyond the classical liberal defense of ‘negative liberty’ to affirm the right of the state to govern in and through “the mentality of the governed” (111). Displacing economic freedom from the rational individual onto the competitive moral fabric of society as a whole, ordoliberalism establishes competition as a political practice. Economic freedom, as Röpke defines it, is the political practice of a Vitalpolitik––or a politics of life. It is this reformation of the self as a vitally satisfied entrepreneur that drew Foucault in to the neoliberal tradition; Vitalpolitik signals a technology of the self and implies an emerging politics of market-mediated surveillance and control. Vitalpolitik refers to the “transformation and multiplication of the social fabric into competitive enterprises,” as well as the “acceptance of competition as a public duty and moral obligation” (110). But unlike Foucault, who reaches a conceptual impasse in his analysis of a free market economy when he suggests that ordoliberalism deploys a dualism of market and society, Bonefeld succeeds in grasping the contradiction between competitive markets and society when he indicates that the power of the state is the necessary moment of reconciliation between labor and competition. An order of competition depends on both the political authority of the state as well as the maintenance and reproduction of a conduct of competition, preserved through the interventions of the state as the market police and guardian of economic liberty for society.

Following the ordoliberal logic of sovereignty and a politics of order, Bonefeld develops an account of the influence of this body of thought on the formation of the policy of European monetary union. Tracing the influence of ordoliberal thought on the development of an interstate system with stateless currencies, Bonefeld demonstrates the emergence of a policy of “subsidiarity” as the core framework of the European Union. The idea of subsidiarity, Röpke argues, entails a system of “relative sovereignty,” in which the social market economy is regulated by rule-based supranational institutions that are not “directly controlled by the electorate” (129). A European policy of Ordnungspolitik therefore reproduces itself through a politics of sovereign authority, and yet it is premised on the formation of a supranational system of centralized decision-making institutions.

A key aspect of the idea of subsidiarity is central bank independence. In an important analysis of neoliberal monetary theory, Bonefeld analyses Friedrich Hayek’s proposal for a federal interstate system. For Hayek, interstate federalism unifies national markets through a stateless currency; a united federal system undercuts “special interests” and curbs excesses of democracy (126). Central bank independence from democratic decision making is fundamental to the protection of a competitive market society. As Bonefeld indicates, “they must be populated and governed by technical experts who conduct monetary policy solely on the basis of economic insight and rule-based requirements” (123). The European Central Bank (ECB), expresses a political decision and operates according to a logic of sovereignty; its stateless character captures the member states in an “order” of monetary union, where national populations must submit to the decisions of unaccountable financial institutions. The sovereign debt crisis exposed the authoritarian character of the Eurozone. Rather than resolving the crisis through democratic decision-making or public contestation, the ECB asserted itself in 2010 by purchasing government bonds, increasing the money supply, and withholding liquidity to Greek banks by fiat (146).

The Strong State and the Free Economy exposes the logic of sovereignty and emergency underlying the institutional structure of the European Union. Bonefeld’s historical reach and theoretical acumen clarify many obscure problems regarding neoliberalism and its development. His book is an important and timely analysis of the political form of neoliberalism, as well as a welcome contribution to the on-going crises of the present capitalist order.