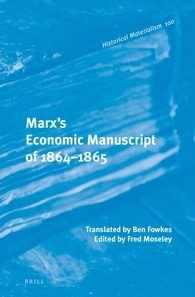 The historical-critical edition of the complete writings of Marx and Engels are now available in the Marx-Engels-Gesamatausgabe (MEGA) in 114 volumes. Importantly, these include the previously unpublished economic manuscripts of Marx. These manuscripts demonstrate the evolution and revisions of Marx’s thought and theories, and the reformulations of the volumes of Capital. Especially revealing are the manuscripts that Engels used when compiling his editions of volumes 2 and 3 of Capital. We now have a clear picture of what Engels was working with, and what he included and excluded in his published editions. Of special interest are Marx’s economic manuscripts of 1864-65, which were the source for Engels volume 3 of Capital.

Ben Fowkes has translated the 1864-65 manuscripts to English for the first time. Fred Moseley edited and provides a masterful Introduction and comparison of Marx’s manuscript and Engels’ edition. The more sweeping assessments from Moseley are that Engels performed a much more heavy-handed editing than Engels himself reveals. Nonetheless, Moseley believes that Engels is remarkably true to the intention of Marx. Not everyone will agree. There is now an urgent need for Marxist scholars to re-read Engels’ editions in relation to Marx’s manuscripts.

Regardless of whether one believes Engels was a heavy- or light-handed editor, or whether Engels retains the intentions of Marx and interprets Marx’s theories accurately, it is not likely that there is much here to change a Marxian scholar’s own interpretation regarding the contested aspects of Volume 3 of Capital, such as the role of the tendency for the rate of profit to fall, the transformation problem and its ‘best’ solution, etc. Thus, the importance of this English edition of Marx’s economic manuscripts of 1864-65 is not that it will settle disputes in Marxian political economy. Instead, the importance of these manuscripts will be that it will generate a flurry of renewed interest in Volume 3 of Marx’s Capital.

Moseley informs the reader that Engels’ editing was an impressive accomplishment, but makes Marx’s manuscripts appear more complete and better organized than they actually were. Moseley insists that Engels does not misrepresent Marx’s overall logical structure, and nor does he change any points of emphasis (with one exception of Engels’ Part 5).

The translator, Ben Fowkes, has provided a very useful Appendix that lists the pages in Marx’s manuscripts that are not included in Engels’ Volume 3 of Capital. He has also marked the text with <> and ><, which signal, respectively, what is included and excluded by Engels.

Marx’s manuscripts are divided into seven chapters, which are subdivided into various sections, along with awkward breaks in the text. Engels’ Volume 3 of Capital turns Marx’s seven chapters into seven parts, and converts Marx’s sections and breaks into chapters, along with several added chapters and sections which were written by Engels as he deemed necessary. In all, there is a total of 52 chapters in Engels’ edition.

In the first three Chapters of the manuscripts Marx establishes the motive force and power of capitalist production, and capital accumulation as the pursuit of profits (by means of producing surplus-value); nothing gets produced unless it is expected to generate a profit. The profit-enforced process of production leads to cost-minimizing techniques of production that generate an initial increase in the rate of profit for the capital that initiates the technique first, but which simultaneously decrease the average rate of profit by increasing the proportion of constant capital in the organic composition of capital. The initiator of new techniques of production achieves profits greater than the “social average,” but competition between capitals makes the new technique “universal and subjects it to the general law.” This creates “A fall in the profit rate” that is “completely independent of the capitalists’ will” (373).

The profit motive generates the general tendencies of equalization of average profit rates and tendential fall in the profit rate that become major factors in the boom and bust cycle movement of capital accumulation.

In Chapter 4 Marx shows that merchant capital (e.g. retailers, advertisers, etc. who create no value) shares in the profits of productive capital (who do create value). The source of the profits does not change. “Just as unpaid labour directly creates surplus-value for productive capital, so also does the unpaid labour of the commercial wage-labourer create a share in that surplus-value for mercantile capital” (402) Likewise, “money-dealing capital” creates no value, but participates in a portion of profits by exchanging different forms of currency during the circulation process. According to Marx: “Money-dealing does not form hoards, but it supplies the technical means for hoard formation” (426).

Hoard formation of money gives rise to potential booms and busts, i.e. crisis. Money hoard formation is shown to be generated by the next important class that participates in a share of surplus-value, namely interest-bearing capital. In Chapter 5, Marx analyzes this interest-bearing capital and interest as a payment, along with credit. Marx argued that there is no systematic general law that governs the rate of interest. Instead, the rate of interest is determined by the demand and supply of loanable capital. Because interest appears to rise up from money itself, interest is highly fetishistic. Marx insists that its possibility is directly manifest from production of surplus-value, and unpaid labor.

In Chapter 6, Marx analyzes the landed-property and rent. Marx shows, against Classical political economy, that rent is a capitalistic phenomenon. Differential rents, whether from difference in fertility (type I) or from capital intensity (type II) tend to disappear, by means of capital mobility and competition. Absolute rents emerge from the ability of an “alien force” restricting investment which functioning capital is not able to overcome. “And it is an alien power and a barrier of this kind that landed property confronts capital over its investment in the land, or that the landowner confronts the capitalist” (749).

In Chapter 7, Marx underscores that his analysis throughout the presiding chapters demonstrates that surplus-value comes from the production process, its source unpaid, or surplus, labor. The distribution of surplus-value is divided between money-dealing capital, merchant capital, interest-bearing capital, landed capital, and functioning capital. Thus, whereas Volume 1 establishes the class struggle between workers and capitalists, Volume 3 is a story of a class struggle between capitalist classes (and petite capitalist classes) themselves.

There is a remarkable coherence between all three Volumes of Capital. It is a story of class struggle between workers and capitalists over the production of surplus-value (Volume 1), and between capitalist classes themselves regarding the distribution of surplus-value (Volume 3). It is a story of expanded reproduction (Volume 2), but an expanded reproduction (i.e. economic growth) riddled with tendencies toward centralization, inequality, instability, and crises.

Although Marx remains an indispensable source for understanding capitalism, his writing and theories are uneven and incomplete. The challenge for Marxian political economy is to continue developing theories of political economy inspired by the deep and powerful ontological and epistemological insights Marx provides with his theories of value and surplus-value. Volume 3 or the manuscripts of 1864-5 are crucial to this effort, and afford inspiration for understanding mechanisms within the structure of capitalism that generate tendencies toward centralization, inequality, instability, crisis, and the class war among the capitalist (and petite capitalist) class itself.

Thus, are there advantages to Marx’s manuscripts of 1864-65 over Engels edited version of Volume 3? Moseley suggests that there are not many. Engels’ version is a better organized and more readable text. Nonetheless, Moseley points out that it is important to underscore that Marx’s texts are uneven and unfinished. Marx’s Chapters Two, Four, Six and Seven were in the most finished state, and Engels published these sections with relatively minor editing and stylistic organization respectively as Parts Two, Four, Six, and Seven in his edition.

Marx’s Chapter 1 and Chapter 5 (especially section 5) were very unfinished and Engels’ editing required a heavier hand. Chapter 3 was somewhere in between mostly-finished and very-unfinished. In his introduction Moseley details the editing that was performed by Engels. Moseley concludes that even in the cases of the very unfinished Chapters of Marx, Engels “mostly did not change the content of what Marx wrote, (with a few exceptions, as discussed [in Moseley’s introduction]” (41).

The most important edits by Engels that Moseley identifies include the following. A ‘supplement’ that was left out which was intended to transition Chapter 1 to Chapter 2 which helps to clarify Marx’s notion of the “organic composition of capital”. Engels excluded several important paragraphs in Chapter 2 regarding the turnover time of capital. Engels excluded a key paragraph that clarified Marx’s meaning of “cost price.” Engels inserted a sentence in Chapter 3, and failed to distinguish his own words from those of Marx, which suggests the falling rate of profit is secular trend. The most significant is perhaps Engels editing in Chapter 5, Section 5, which in addition to misleading the reader as to the roughness of these pages, gives a misleading emphasis on the credit system, and distracts from the issue of interest-bearing capital and the rate of interest. Moseley contends that most of the pages on credit do not belong in Volume 3, and would have been placed by Marx into an unwritten Volume 4 regarding the ‘process of competition.’ Finally, Engels changes Marx’s title in a way that perhaps distracts the full aim of the work.

Marx’s manuscripts of 1864-65 will initiate a flurry of interest from Marxian scholars to Marx’s theories of capitalism. 150 years after they were written, Marx’s analysis remains deeply insightful and remarkably relevant. His theories on the falling rate of profit, interest-bearing capital and absolute rent envisage tendencies toward centralization, and towards the emergence of a (relatively) few very large capitalists “competing” among masses of petite capitalists in an abiding competitive war for a portion of surplus value. The result is inequality, wealth for the few, instability and the perpetual immanence and necessity of crisis. Although they are 150 years old, Marx’s manuscripts of 1864-65 explain more about contemporary political economy than 95 percent of today’s economic literature.