Marx & Philosophy Review of BooksReviews‘The German Left and the Weimar Republic: A Selection of Documents’ reviewed by Jule Ehms 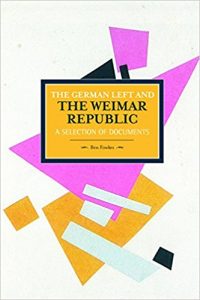 Ben Fowkes
The German Left and the Weimar Republic: A Selection of Documents

Ben Fowkes’ comprehensive collection contains about 170 documents translated into English which relate to either the Social Democratic (SPD) or the Communist Party (KPD) during the Weimar period. Both parties were the largest of their kind during that period (only in the Soviet Union was the Communist Party bigger) and Fowkes’ source book covers their struggles and debates on goals and strategies during the troubled times of the Weimar Republic.

The book is divided into thirteen chapters, proceeding more or less in chronological order. Each chapter starts with a compact introduction, where Fowkes provides an excellent and enjoyable overview. Here he also dwells on the motives of the authors of the documents and includes recent research discussions.

Every chapter contains at least thirteen and in some cases over twenty documents. Only the last two are shorter, although chapter twelve also includes a list of the respective parties’ leaderships, membership figures, and the election results from 1919 until 1933. The sources encompass one to three pages on average and are mostly excerpts from longer pieces, especially from parliamentary speeches, articles and party congress proceedings. The titles that Fowkes chose for the documents provide a brief overview of their content, which makes it easy to navigate through the chapters.

The collection starts with a background piece, which provides a sufficient base for a study of the presented documents. This chapter, which serves as an introduction, could have been organized better. Fowkes starts by summarizing chapter two, yet he does not continue to outline further sections in the book. Instead, he describes the SPD’s and KPD’s development and their most important discussions but refers only occasionally to the documents of his collection. The author certainly presents a comprehensive overview of the history of the social democratic and communist party from 1918 until 1933. However, it would help the reader and increase the comprehensibility of the text if the chapters themselves had been introduced.

The first two chapters focus on the very early years (1918-1920) of the Weimar Republic. The first one covers the Social Democrats, who, after 50 years of parliamentary work, were now for the first time in government and confronted with ‘the interplay between the responsibilities of power and the pressure of action from below’ (14). A whole new chapter, the second one, is devoted to one specific controversy of that time: the stance of the left parties (primarily of the Social Democrats) on the Council Movement. Chapter three turns to the Communists and their political line from 1919 until 1924, revealing how that policy (especially the insurrectional attempts of 1921) was under debate and eventually turned over by a new leadership.

After the two parties and their general policies have been introduced, chapter four deals with the debates within the SPD and KPD on whether the recently established republic should be defended and if so by what means. Since the question of political alliance was especially relevant for both parties at that point, Fowkes also illustrates the relationship between the Social Democrats and Communists in this section.

The following two chapters deal with the Social Democrats and Communists individually. Chapter five addresses the struggle between the SPD’s socialist agenda and their position as a coalition partner with bourgeois parties. Fowkes’ interest in the debates within the parties becomes especially clear in this chapter, as he has included different views either defending or criticizing the respective leadership.

Chapter six focuses on the development of the KPD in its relation to the Comintern. The Bolsheviks’ domination of the course of the German (party) Communists becomes clearly apparent from the documents that Fowkes has chosen. However, the internal debate that took place within the KPD, and the criticisms voiced regarding the influence of Moscow, could have been more present.

The next two chapters deal with particular concerns of the SPD’s and KPD’s parliamentary agenda. Chapter seven allows the comparison of the social democratic and communist stance on the matter of foreign policy, including the controversy around the Versailles Treaty, the Ruhr invasion and the question of armament. Chapter eight turns to domestic politics, the ‘search for democracy in the Armed Forces’ (xiii). This part of the book addresses mainly two topics: firstly, the efforts during the beginning of the Republic to democratize the Reichswehr or even to establish a workers’ guard; and secondly, the SPD’s relation to the Reichswehr after 1918, although unfortunately, it includes only one document of the Communist perspective on this subject.

Chapter nine discusses the women’s politics of the SPD and the KPD. It illustrates the demands for which each party respectively fought and their attempts at the political mobilization and their organization of working women. In this case, however, Fowkes’ explanatory introduction is almost more interesting than the chosen documents itself, since the author addresses the topics of abortion, contraception and homosexuality. Unfortunately, these subjects are only briefly represented by the sources; there is only one document on abortion but nothing further on the struggle for birth control or decriminalization of homosexuality. Moreover, the text files tend to be slightly repetitive. For example, the speech of KPD member Martha Arendsee on the protection of mothers (doc. 9.15) from 1927 covers many topics which are also brought up in the KPD’s proposed law on the protection of working women from 1931 (doc. 9.16).

Chapter ten introduces the programs of the two left parties and the modifications that have been made throughout the years. As Fowkes points out, the debate on a program is concerned with the question of the organization’s own political identity. The SPD in particular entered discussions as to what extent the party should or could also represent agricultural workers or small craftsmen, changing the party from being a ‘workers party’ to a ‘party of labor’ (doc 10.7, 294).

Chapter eleven covers the electoral base and membership of both parties. Fowkes describes both the communist and social democratic ‘milieux’, and considers how they might have changed and overlapped. The documents presented in this chapter are the previously mentioned figures and several statutes. Three are of them are party statutes; the other five are from organizations (like the paramilitary Rote Frontkämpferbund or the Freidenker, the Freethinkers League in Freethinkers League in Germany) associated either with the Communists or the Social democrats. The selection of the latter is understandable, since these documents provide an impression of the groups who were active in each milieu. The reason for choosing the parties’ statutes, however, is not clear. Since Fowkes mentions all the different associated clubs and movements, it is not understandable why only a few of them are presented here.

The strength of the book lies in its complexity. The reader gains a comprehensive impression of the Weimar left, albeit only of the parliamentary left. Fowkes excludes trade unions as well as social movements, therefore the title ‘German left’ is in fact misleading. With respect to the Social Democrats and Communists however, Fowkes has composed a rich collection that presents the most relevant sources and files. To the best of my knowledge, only a few of these texts have been translated into English before now.

Fowkes has attached explanatory and sometimes critical notes to most of the documents. These notes provide extra context, offer first interpretations or list deficiencies that he has noticed. Moreover, the documents are translated carefully. Text cuts are indicated and the content of extensive omitted parts is summarized. Due to Fowkes’ love for detail, biographical information is also added in the foot notes, and laws that are mentioned in the documents and contemporary political terms are explained. All this allows readers to develop their own, informed evaluation of the documents.

However, there are limitations to this collection that have to be remarked upon. First of all, Fowkes follows a top-down approach: The documents are merely official or come from the party leadership, which is also why most of the persons quoted in this book are male. Due to the focus on the general party line, parliamentary politics or general debates, the editor a priori excludes voices from the membership base. But there might have been space for less official documents – such as reflections of simple party members, experiences of local functionaries or personal accounts of those involved in party demonstrations, meetings or the General Strike of 1920. As already mentioned, some of the documents resemble each other in content, which could have been avoided by including more voices or extending the variety of the types of documents. The few personal accounts that Fowkes has chosen to include, are some of the more remarkable documents in this collection. However, in some cases it would have been helpful if Fowkes had explained how and why he picked the documents that have been included in this book.

Apart from these few reservations, Ben Fowkes has produced a rich first collection of sources from the Weimar parliamentary left. It can serve as an important resource for the study of German Social Democracy and German Communism. In addition, the collection also offers valuable material for teaching classes on the Weimar Republic in general.