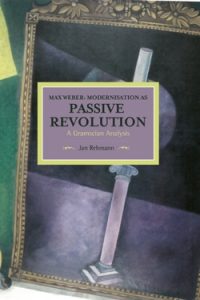 Lucas Miranda has a Masters in Political Science at Florida International University. He …

In Max Weber, Modernization as Passive Revolution: A Gramscian Analysis, Jan Rehmann provides a thorough study of Max Weber’s thought, ranging from Weber’s innovative methodological operations, to his, not always consistent, epistemological convictions. Weber’s political interventions are, nonetheless, the focal issue of Jan Rehmann’s reflections, which, in Rehmann’s interpretation first and foremost portray him as an ‘ethico-political reformer’. Although Weber has seldom been analyzed under the guise of hegemony theories, Rehmann notes that ‘the key to understanding his intellectual mode of production lay in the ethico-political project of a modern bourgeois hegemony’ (13). The ambiguous and dichotomous aspects of Weber’s political interventions are marvelously explored by Rehmann, as he juxtaposes Weber’s modernization project for Germany (inspired by Fordism) to Gramsci’s structural views on hegemony. Through this comparative framework, Rehmann makes opposing political projects of hegemony the overaching theme of his book, and thus, he establishes an analysis where Weber’s political and sociological importance can be evaluated both on its own terms, as well as in a contrasting manner to Marxism in general.

The book comprises 4 main parts, each consisting in several chapters. The first part focuses on Weber’s ‘Ambivalent Fascination of [American] Capitalism’. Addressing Weber’s first visit to America, this first set of chapters shows how he draws from his empirical observations the conviction that early 20th century capitalist modernization in America was far more advanced than in Germany, and, thereby that Germany should proceed to revolutionize its economic-political system still rooted in lingering vestiges of feudalism. This was Weber’s most pressing concern, both in cultural and economic-political terms. Weber observes that ‘instead of a self-confident bourgeois culture, what is developing is a dangerous blend of subalternity and unchecked lordliness’ (93), in sum, ‘a dictatorship without hegemony’ (100).

In the book, Antonio Gramsci is not only used in discussions on hegemony, he also introduces the concept of ‘passive revolution’ which Rehmann draws upon to frame Weber’s political interventions. Though ‘passive revolution’ remains an ambiguous, and elusive, term throughout the book (a possible flaw in my view), it is noted that Gramsci used it to examine states which, during their capitalist development, ‘instead of eliminating the feudal classes [were] downgraded them to mere ‘governing’ castes devoid of any economic function’ (8). Making of ‘passive revolution’ a central term in analyzing Weber’s overall project of modernization, the term comes into play at the core of Weber’s dichotomous analysis of the German bourgeoisie. ‘Weber is both the perceptive observer of a historically constituted bourgeois subjectivity and the ideological designer of another bourgeois subjectivity that still needs to be constituted’ (XI).

Thus, ‘Weber is both a critic of Germany’s ‘passive revolution’, which keeps the bourgeoisie in a political and cultural subaltern position vis-à-vis the agrarian class’ (57), and the protagonist of a new constellation of bourgeois intellectuals, which he thought would emerge from the ‘modernization project of a bloc comprising the bourgeoisie and the labour aristocracy’ (173). This bloc should come about through a process of integration, which, essentially, means the acceptance of the agrarian classes, especially those bounded to aristocratic links, to a more advanced capitalism. Thus, the new bourgeois class constellation which Weber strove for should aim ‘to modernize German capitalism with the aid of […] mass mobilization, and in accordance with a Puritan-American blueprint’ (12). Because these are the central themes of the second part of the book, the chapters therein are of paramount importance, as they cover both facets of Weber’s political project, namely the criticism of a ‘passive revolution’ in Germany, and the outlines for a Fordist project of modernization.

It is also in the second part where the most practical implications of Weber’s politics show radical divergences with any Marxist project, as well as some (limited) amenabilities with general Leftist agendas. In the interest of such a bloc, Weber calls on the bourgeoisie to recognize the reality of class struggle, and furthermore, Rehmann remarks that Weber, responding to his critiques, has said that when discussing the plans of Social Democracy to the bourgeoisie, his speech was admittedly of a ‘class-conscious bourgeois addressing the cowards of his own class’ (148). This statement, in my view, embodies exactly Weber’s twofold political character in criticizing his own class (to pave the way for a bourgeoisie hegemony), while conciliating the proletariat. However, this should by no means spell the end of class struggle, as Weber believed its socio-political inevitable implications to be essential for the bourgeoisie to recognize with a sense of ethico-social responsibility.

Rehmann emphasizes that for both Gramsci and Weber, the achievement of hegemony must represent in its core an ‘ethico-political moment’. It is in this normative aspect of a class’s position of hegemony (as in the sense of developing its own ‘ethic’), wherein lies the highest similarity between Weber and Gramsci’s views on the class struggle for hegemony. The difference, of course, lies in whether it is a new hegemonic consciousness rising from below (through emancipation), or a bourgeois bloc (re)constituting its own ethic in a novel way from above. Thus, what is at stake ‘are opposed political projects within the context of unequal power relations’ (143). Such a context, Rehmann tries to show, is equally recognized by both Gramsci and Weber. However, while Gramsci adopts a Marxist perspective, Weber presents a particular unique standpoint, one which Weber attributed to himself, of an ‘ethico-political reformer’ with no fixed ideological position, but ‘by virtue of his conception of history’ which calls for an ‘ethical mobilization of economic subjects’ in the transition to Fordism.

However, Weber’s project of hegemony still has an undeniably ideological bias, one which is fundamentally devoid of any revolutionary praxis. From a Marxist standpoint, as Rehmann observes, the theoretical elaboration behind Weber’s political interventions, albeit successful in underpinning the hegemonic-dynamics of power, greatly misses (or more likely discredits) the ultimate Marxist goal of overcoming bourgeois society altogether. Although Weber is critical of the cultural and economic-political backwardness of Germany, importantly pointing out bourgeoisie’s deficient political awareness of social reality, ‘his criticism remains uncritical with regard to the underlying social relation, namely the capitalist appropriation of surplus value’ (92).

The third part of the book is a significant departure from all the previous discussion thus far. In this third set of chapters, Rehmann focuses on the conceptual set-up of Weber’s intellectual production. He analyzes Weber’s epistemological inquiries by examining Weber’s debates with many of his contemporaries on a variety of issues but especially over neo-Kantianism. Thus, in a sense, the book could be perceived as integrating two distinctive blocs: part one and two concern Weber’s ethico-political project of a modern bourgeois hegemony, and part three and four concern the methodological underpinnings of his intellectual mode of production. The truth of the matter is that part three, particularly, will definitely be of most interest to readers who primarily care about Max Weber and his more obscure theoretical subtleties, which do not always speak directly to the main thesis of the book.

This being said, part three explores in great detail Weber’s methodological thought-out transition to a sociological science of reality, that conceives of itself as ‘free of value judgements’ (174). The problem, of course, is how to conceive of Weber as an ‘ethico-political reformer’ who at some point decided to establish a socio-scientific objectivity as the epistemological foundation of his work. The most interesting point showcasing this is found in Weber’s ‘existentialist turn’, which ‘the reference to values with the meaningfulness of life’ by blending the concept of ‘personality’ with that of the ‘man of culture’ (240). In other words, his socio-scientific interests on objectivity, interestingly, shifted to the ‘inner peculiarity’ of individuals, which Rehmann interprets as an ‘existentialization of ideological subjection’ (242). Moreover, this shift also leads to the final discussion of part four, where, finally, the major theme of hegemony is picked up again through the analysis of Weber’s ideal-type of the spirit of capitalism that ‘allows him to sever the ‘internal’ disposition of subjects’ (279). In short, ‘the thesis on Protestantism, easily accommodates the need for a Fordist regulation of the way of life’ (276). And furthermore, Rehmann concludes, ‘The Protestant Ethic’s hidden telos is the historical bloc of Fordism’ (305).

Part four, then, continues the discussion over Weber’s conceptual frameworks by placing The Protestant Ethic and The Spirit of Capitalism as an intermediate position between Weber’s political critique of German feudal pretentions stalling a ‘mature bourgeoisie ethic’, and his epistemological reflections on socio-scientific objectivity. The apparent inconsistency found in Weber’s body of work (already pointed out in other parts of the book) is further explored here, but ultimately defended by Rehmann as he adopts Mommsen’s interpretation that while Weber says of himself to be positing a socio-science ‘free of value’, ‘he tacitly constructs the network of his ideal types in such a way as to allow the genuine problems of value to permeate it as far as possible (277).

To conclude, this book is primarily a great study on Max Weber, exploring in great detail too many aspects of Weber’s work to mention in one review. However, once finished and analyzed in its entirety, the book might leave the reader without a sense of closure, especially with respect to where Rehmann, as a Marxist, stands in relation to Weber and his political aspirations. It seems that just as Weber had an ambivalent fascination with capitalist modernization, Rehmann has an equal ambivalent fascination with Weber’s analytical prowess. Gramsci, then, becomes the theoretical component used by Rehmann to navigate through his analytical fascination, in order to give it a more ideology oriented basis, both for criticism and for a deeper analysis of Weber’s ideological works. By doing this, in the end, the ‘ethico-political reformer’ can be seen as a ‘class-conscious bourgeois’ who, ‘by virtue of his conception of history’, advocated for a new ‘intellectual of the bourgeoisie [who] now presents himself as a social scientist who is forced to accept, ‘without value judgments’, not just Germany’s ‘power pragma’ and increasing bureaucratization, but also capitalism qua force of destiny’ (268). Nonetheless, crucial statements such as this one are never further explored in a forceful and critical way (that is, beyond pointing out divergences with Marxism). Rehmann’s analytical fascination towards Weber, therefore, seems to prevail in the ambivalent fashion of Weber’s intellectual character.