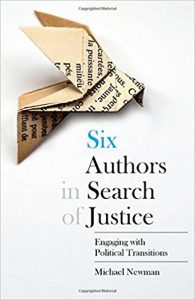 In this engaging and thoughtful study Michael Newman attempts to demonstrate how creative authors, who have lived through transitions from oppressive political regimes, can illuminate otherwise narrow academic approaches to justice and injustice through their imaginative work. He takes six twentieth century writers, mostly novelists and short story writers although one, Ariel Dorfman, is probably best known for his dramatic contributions and analyses their work in the historical context of the societies they lived in. The study begins by offering an extremely valuable introduction to the main themes of academic discussion, to which we shall return later. Newman himself is Emeritus Professor of Politics at London Metropolitan University and we can see the fruits of years of distilled reflection in his approach. His previous publications include a fine biography of Ralph Miliband and the Politics of the New Left (Merlin Books, 2002) and studies of humanitarian intervention and the problems of democracy and sovereignty in the European Union.

Newman takes a more or less chronological approach to his six authors, beginning with Victor Serge whose novels on the Soviet Revolution of 1917 and its aftermath through which he lived, are in some respects the progenitors of this form of writing. This is followed by the French writer, Albert Camus on the Nazi and Vichy regimes in France, then Ngugi wa Thiong’o on the end of British colonialism in Kenya and the problems of post-colonialism. Newman then turns his attention to Spanish and Latin American dictatorships through the writings of Jorge Semprun in Francoist Spain and Ariel Dorfman and the consequences of Pinochet’s authoritarian regime in Chile. He concludes with a discussion of the South African writer (the only woman) Nadine Gordimer whose novels and short stories detailing emotional trauma in the Apartheid regime were such an important part of the wider struggle.

Consideration of each author is prefaced by brief but perceptive historical summaries of the political context of their writing which very much set the scene for more detailed discussions of the some of the authors’ key works. Newman is widely read and is keenly aware in the shifts of emphasis and concern in the authors surveyed. Each appears to start from one view of injustice and more often than not move towards a more nuanced consideration of how to deal with transition towards a democratic society. Most gravitate from a strongly Marxist or a least radical socialist position which is more retributive in style towards some form of reconciliation. Perhaps uniquely however, Gordimer begins from a liberal critique of apartheid and moves towards the Marxism of the ANC during the period of armed struggle but then fully supports the Truth and Reconciliation Commission (TRC) which has probably become the most accomplished form of procedural justice to deal with the manifold injustices of such regimes. Newman concludes that all the authors illuminate key questions of transition and offer collective insights that have a general relevance beyond their particular concerns. Significantly, he suggests that however valuable such insights are, they cannot substitute for academic study (225). Newman makes clear he is not a literary critic but a political scientist and I wondered if there were some methodological problems in considering texts in this way. We’ll consider this later.

His discussions of the individual writers are very rewarding and show a broad understanding of their whole oeuvres, which is no mean feat, and he locates them within the wider perspective of the academic debate around transitional justice. It’s clear from what he says that he holds all the writers in great respect as courageous oppositionists who suffered for their beliefs often enduring prison and exile or, as in the case of Gordimer, experiencing sustained institutional harassment by the regime. He sympathetically explores their evolving judgements and perceptions in the light of the sometimes rapidly changing political circumstances but more often long periods of simple resistance. His political-science vectors are never far from view and he attempts to see his authors through the perspective of what he calls six overlapping forms of justice: liberal, social, Marxist and legal forms are general while historical and transitional forms relate to particular societies following ‘acute collective traumas’ (214).

The first of these was the overthrow of the Tsarist regime in Russia by the Soviet Revolution in 1917. This was of course the only genuine revolution while the rest of the political transitions were more or less peaceful, though often only after periods of armed struggle: the French Resistance in Camus’s case, the Mau Mau insurgency in Ngugi’s, the Spanish Civil War in Semprun’s (though this preceded the period of Fascist dictatorship) and the ANC’s armed struggle phase in Gordimer’s. In Dorfman’s case Pinochet’s dictatorship followed a violent armed overthrow of Allende’s elected Socialist government in Chile. Victor Serge was by no means a conventional Marxist of course, but very much on the libertarian social end of the spectrum. He nevertheless appears initially to accept the Marxist analysis that the injustices of the Tsarist regime were a product of capitalist relations and could therefore be addressed by formal means, such as systems of legal justice and autonomous political institutions. But like so many enthusiasts for the Revolution he became dismayed by both Leninist and, especially, Stalinist power and began to advocate political pluralism and an autonomous civil society rather than the violent suppression of dissent that earlier seemed necessary. Newman believes that although Serge was outside what was to become the conventional Transitional Justice (TJ) paradigm, his advocacy of a multidimensional approach was an important precursor.

Similarly, Albert Camus’s preference for conciliation rather than retribution foreshadows the TJ approach. However, unlike Serge, Camus’s revulsion of the Nazi and Vichy regimes was not so much structural as moral. He saw them as varieties of ‘absolute evil’ (215) that could not be fixed simply by political overthrow. Moreover, although sympathetic to the Left generally, he grew increasingly anti-communist and identified the primary cause of injustice with lack of freedom. This moralism also came to identify the position of another writer. Like Serge, Jorge Semprun embraced Marxism as a young oppositionist in Spain during Franco’s dictatorship. Starting from the Republicanism of his father he gravitated to the Marxism of the Spanish Communist Party via the French Left to which he stayed true for close on twenty years and a period of incarceration in Buchenwald during the Second World War. However his expulsion from the PCE led to a break with communism which he began to equate with Nazism as a ‘radical evil’ thus adopting a more moralist approach like that of Camus.

It is useful to link together the approaches of Semprun, Ngugi and Dorfman in a different way because all emphasise cultural elements in their work and particularly the importance of preventing the suppression of memory. For Semprun, Franco’s attempt to erase the Republican memory of the past and control the history of the Civil War had to be opposed at all costs. But equally, they could not be substituted by Communist myths which would only lead to a different kind of denial of history. Some compromise was necessary and when he later became Minister of Culture under Gonzales’s Socialist government, he recognised that simple amnesty for those who committed widespread injustices under Franco would lead only to amnesia and bitterness . He was influential in passing the Historical Memory Law under which the crimes of Franco were at last recognised.

For Ngugi in Kenya the colonial appropriation of his people’s history had denied them access to the foundations of their own identity and he urgently endorsed Franz Fanon’s strategy of the ‘decolonisation of the mind’ in his own work, even after a while virtually refusing to write fiction in English and instead turning to Gikuyu. Significantly, he also saw the same process at work in the post-colonial regimes of Kenyatta and Moi and so the more structural approach he adopted earlier which imagined justice arriving as British colonialism departed had to be refined to include the element of cultural oppression enjoyed by subsequent post-colonial regimes. Dorfman, best known for his play Death and the Maiden, also took this approach and his work resists what he called the burial of ‘the memory of the dead’. Like Camus, Dorfman insisted on justice for both the survivors and victims of dictatorship and was appalled by the excessive passivity and acceptance of American popular culture of the transition from Pinochet. This led him, says Newman, to a powerful identification of the governing principles of TJ in which personal accounts of both victims and perpetrators of the period became crucial elements of the process.

By the time of the ending of apartheid in South Africa in the early 1990s much of the principled approach of transitional justice had been recognised and Nadine Gordimer, after a lifetime of courageous opposition to the white supremacist regime, fully supported the TRC. Like Semprun she was acutely aware of the vulnerability of the new democracy and her fears did not dissipate with the stifling of dissent and unreconstructed inequality under the ANC’s government.

I was lucky enough to meet the then ‘James’ Ngugi when he a postgraduate student in Leeds in the late-1960s and found his trilogy that includes The River Between (1965) the first time I could fully grasp the struggle against British colonialism from the inside as it were. Similarly, I once heard Nadine Gordimer read a short story about a wealthy white couple who lived in a gated ‘community’ in South Africa. Her image of their child who gets fatally trapped in the rolls of razor wire round the community, revealing the existential nightmare of apartheid, affected me more than any amount of theory. I think the point is that great literature is affective rather than analytic; it radically changes the way you feel about the situation. This brings me to the methodological problem I noted earlier. By including the non-fictional works of the writers under discussion, Newman maybe misses some of what is essential to creative writing, that it is to some degree autotelic and takes flight from the authors themselves. In his classic work The Meaning of Contemporary Realism (Merlin Press, 1963), the Hungarian Marxist philosopher, George Lukacs, noted how Thomas Mann’s politically conservative views shrivelled under the pressure of the human truths he was forced to reveal in his novels. So I’m not sure that an author’s non-fictional writing should be considered under the same register as their creative works. However, this is a quibble when Newman has written such a worthwhile and reflective consideration of how writers have expressed the experience of resistance to, and dealt with the consequences of, gross injustice. As unjust authoritarian regimes are now back in fashion, we can take strength from them.