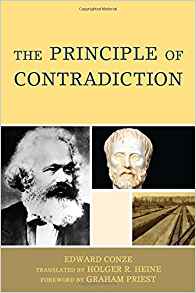 Edward Conze
The Principle of Contradiction

Alex Miller Tate is studying for a PhD in Philosophy at The University of Birmingham. He studies …

The near-total suppression of Edward Conze’s ‘The Principle of Contradiction’ by the Nazi regime was a huge loss to 20th Century Marxist scholarship. Holger Heine’s discovery of a rare copy of the German manuscript, and production of an English translation, is undoubtedly one of the great gains of the 21st. There is much in the work to interest Marxists of course, but it also makes contributions that are of significance to all scholars of contemporary Philosophy of Logic. Moreover, anyone with an interest in the history of radical thought will find much food for thought within its pages, particularly in Heine’s excellent introduction.

The work itself is a tremendously thorough investigation of the notion and nature of contradiction, and the different purported logical, metaphysical, psychological, and social principles that had (at his time of writing) historically been taken to govern it. Simply for this reason, the book should be of interest to anyone working in the philosophy and history of logic, quite regardless of their own theoretical tradition, or opinion of Conze’s.

The book’s starting point is the Aristotelian dogma regarding contradictions; that they are never real, or true. One of the many valuable elements of Conze’s book is the pluralistic attitude with which he approaches his critique of this dogma. Many of the varieties of the principle of (non) contradiction that Conze concerns himself with (for instance, those expressed in psychological terms), are ones that are today unfairly, and dogmatically, dismissed as at best derivative forms of a fundamental logico-metaphysical principle that governs the world. Conze’s discussion (Ch.1: 14) of a visual illusion (the discovery of which is attributed to Fleischl) that appears to support the invalidity of the principle of contradiction for ‘immediate sensation’, is particularly worthy of reflection in this regard, whatever we may eventually think its relation to the logical study of contradiction may turn out to be. It appears to me that Conze’s pluralistic conception of contradiction and its study may serve as a useful corrective to the over-reliance on mathematical techniques that has characterised the study of contradiction in recent times (I am thinking here of the analytic tradition’s study of contradiction in logic and language).

Naturally, however, Conze’s historical diligence is not, for him, an end in itself. The ultimate purpose of this historical perspective is to lend support to Conze’s main thesis – that the grounds of the principle of contradiction (and indeed any putative ‘laws of thought’) are not indubitable, necessary, or transcendent. Instead, they are historical, contingent facts about “the reciprocal interaction [of theoretical objects] with practically active and labouring men” (Ch.3: 348).

He argues that bourgeois philosophical treatments of the principle of contradiction are alienating, in that they obscure the nature of the principle – as historically, materially, and contextually grounded in certain kinds of practical activity (specifically, and crucially, labour) – presenting it as given, or transcendent of the everyday existence of human beings.

This critique of the logical orthodoxy of his day could equally well apply to the discussions of paraconsistency and dialetheism in contemporary philosophical circles. The possibility that principles of logic may not be ‘given’ or properly independent of the material conditions of (particular classes of) human beings, is undeservedly disregarded in discussions that purport to discuss the falsehood or limited applicability of certain logical principles. Developing Conze’s work in this direction would thus likely be both theoretically fruitful from a Marxist perspective, and a perhaps unexpected way of bringing mainstream analytic philosophy and Marxist thought into the sort of productive exchange not seen since the heyday of analytical Marxism.

Conze is a materialist dialectical theorist, thus he holds that networks of capitalist social relations exhibit ongoing contradictions that are the ultimate source of social change. As a consequence he must, in some way, ultimately deny the principle of (non) contradiction. Naturally he denies the Aristotelian versions where the principle is seen as transcendent of human activity, but even the theory explicated above constitutes a nuanced endorsement of the principle; it does indeed hold while and to the degree that labouring activity grounds it. Thus, he writes, “the emergence of contradictions is the sign of a bad practice, that is, of a practice that fails in its tasks” (Ch.3: 355).

By this he does not mean that the practices, or their failure, are necessarily bad in the strongly evaluative sense; indeed, the end result of the realisation of the intrinsic contradictions of capital “set an enormous number of workers free” (Ch.3: 355). Rather, he means to suggest that the emergence of contradictions in labour practice is a sign of the degeneration of that practice in a given form, for good or ill – a natural consequence of the fact that such practice is what grounds the (contingent) validity of the principle.

The insight that the validity of certain logical principles, or other ‘truths’ may be grounded in human concerns and activity is not an idea new to Conze. He notes that this much is argued by William James, and others in the Pragmatist tradition (Ch.3: 282-294). Conze, however, objects to the Pragmatist position on the grounds that they are insufficiently precise regarding the nature and kind of practical activity that grounds truth – “False is not so much what it says, but what it keeps silent about” (Ch.3: 291).

Crucially, Conze observes that the Pragmatists obscure the fact that the kinds of practical interests and activity one engages in are class-dependent – and thus the theories grounded by this activity as well. The pragmatist’s failure to acknowledge this point is best exemplified in their not asking, let alone answering, the following question; “who has such needs, and who satisfies them in this way” (Ch.3: 291). To elaborate more on Conze’s critique of the pragmatists would take up a huge amount of space, and I would nevertheless fail to do it justice. Suffice to say that, though one could reasonably describe it as a secondary concern of the work, it is nevertheless worth reading the book just to be able to engage with it. Given the ongoing leftist and activist interest in the practical dimension of theory (that is, the question of how theory serves particular interests, and how it may be made to serve emancipatory ones), it is important to reflect on early Marxist warnings to resist the lure of a simple, or ‘given’ pragmatism that fails to reflect the unequal (and, importantly, classed) distribution of interests and motivations.

The work is not perfect, however, as is to be expected of a magnum opus produced so early in a career (Conze was only 28 when The Principle of Contradiction was first published). It is, for instance, often convoluted and dense in its style; Conze regularly diverts attention unnecessarily away from the main goal of a section, or even the overall text. As a result, it is rather difficult, perhaps impossible, to follow his train of thought on the basis of anything other than multiple close readings.

A particularly confusing instance of this tendency is to be found in Conze’s discussion of labour as the practical activity that grounds the principle of contradiction. He seems to argue that the kind of labour that performs this function is ‘truthful’, in the sense that it produces knowledge of a complete, rather than partial or ideological sort (Ch.3: 321-32). Nevertheless, it seems that at least many of the aspects of labour that he notes as helping to ground the principle of contradiction –for instance the necessity of focusing on producing real-world effects (Ch.3: 307-10), are also, intuitively at least, qualities of labour in its alienated form. Thus it is unclear whether the sort of labour that might be undertaken free from the alienating influence of capitalist relations of production would ground some form of the principle of contradiction or not. This lack of clarity does not detract from the overall thesis, nor from the value of Conze’s book, but it does leave a fascinating and important question regarding the status of theoretical knowledge grounded outside of the current historical period unanswered. Many, I suspect, will be disappointed not to discover any explicit suggestion of whether the principle of contradiction could be grounded in non-alienated labour forms, especially since it is these labour forms that might be expected not to degenerate into material contradictions.

These small concerns notwithstanding, Heine has achieved something truly wonderful with this translation. He has made available for study an early yet insightful text from a truly great thinker. Its contents resonate with, and bring together, many themes of contemporary thinkers. For the English-speaking academy to lose it to totalitarianism would have been an intellectual tragedy; to now have it available is an intellectual triumph.