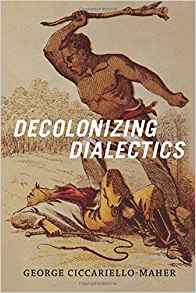 In the opening passages of George Ciccariello-Maher’s Decolonizing Dialectics the author uses the event of Occupy to discuss the ways in which a bland conception of unity functioned to destabilize the movement. Under the auspices of a 99% united against the 1%, when significant differentials of oppression (racism, sexism, etc.) were raised, the movement as a whole treated them as anathema: such concerns were undermining the unity of the 99% and thus, in the interests of a bland unity, were dismissed. Simultaneously, different political positions that led to these concerns (white supremacy, libertarianism, anti-immigration politics) were allowed to thrive in the interest of unity. ‘In many places,’ the author writes, ‘Occupy thereby became a safe space for those already safe.’ (5) Such a unity thus produced disunity by excluding the committed radicals who raised these concerns and became, when the movement reached its logical end, ultimately in unity with the political order it initially claimed to oppose.

From the above analogy we can deduce the entire gamut of Decolonizing Dialectics. To put it in the language of the Cultural Revolution, where two interpretations of dialectics were in conflict, we are faced with an antinomy between a dialectics that privileges either “two combines into one” (forced, collaborative unity) or “one divides into two” (combative demarcation between political lines in the interest of revolutionary unity). Whereas the former sense of dialectics is evident in the “unitarian” approach of Occupy, it is the latter sense that tells us why such a unity is in fact disunifying and exclusionary. Ciccariello-Maher’s book is focused on excavating this more combative sense of dialectics based in a rupture from unity rather than the preservation of the status quo.

In order to excavate and explore a dialectics decolonized from this false unity that privileges the already powerful, Ciccariello-Maher centres the work of Frantz Fanon between Georges Sorel and Enrique Dussel. The result is a rather unique and sophisticated project that at times leaves the reader breathless from the elegant speed with which it moves through concepts. Since there is a lot in this book, my review will focus on the main elements of its exploration of a combative and decolonized dialectics and conclude with a brief critique.

Ciccariello-Maher’s decision to begin with Sorel might seem like an odd choice for those inundated with the claim that Sorel also influenced fascist ideology, but the author not only demonstrates that this claim is unsubstantiated but points out that Fanon himself was influenced by Sorel. The point of the Sorel chapter, then, is to examine a theoretical opening to the combative dialectics that Fanon will represent par excellence. Rejecting dialectical unity between the proletariat and bourgeoisie, Sorel’s dialectics uphold class struggle. Focused on proletarian violence aimed against bourgeois force, theorizing the “myth” of the proletariat and its incommensurability with the reign of capitalism, and opposing ‘false universals masquerading as ethical systems,’ Sorel ‘opened a space for the subjective rupture and struggle that while necessary in his context to jumpstart the class struggle would also prove necessary – arguably more so – for overcoming those same universals that impede a decolonized dialectic.”‘ (43)

With the basis of a combative dialectics established through Sorel, Ciccariello-Maher can move on to his central concern: Fanon’s decolonization of dialectics. Fanon’s dialectic, while sharing ‘much with Sorel’s own radicalized dialectic of class struggle,’ also ‘sets out from a different location, the zone of nonbeing.’ (54) Hence, ‘[a]gainst the ontological force of white supremacy,’ Fanon proposes a ‘counterontological violence … that operates toward the decolonization of being.’ (63) That is, whereas colonialism divides the world into incommensurable and “Manichaean” categories of settler and native – a division that is one of ontological force in that it violently subordinates the being of the latter in favour of the former – the anticolonial response is violently to shatter this false unity of colonialism (which is in fact a predatory disunity) through the violent self-determination of the colonized.

Through examining both Black Skin, White Masks and The Wretched of the Earth, Ciccariello-Maher traces out the vicissitudes of Fanon’s decolonial dialectic: ‘[t]he Manichaean division of the colonial world begged the question of the nation, but stitching that nation together required an intricate dialectic-within-dialectic that would only momentarily unify a dynamic decolonial nation – the stepping-stone toward an eventual liberation that could only be global.’ (78) These vicissitudes will be familiar to Fanon scholars, and Ciccariello-Maher is deft in explicating many of these scholars along with Fanon, as he sutures this “dialectic-within-dialectic” to his theorization of a combative, decolonized dialectics. Thus, after a pointed examination of the ‘expanding circle of the nation’ (86) which includes the “detours” of national consciousness, the problematic of comprador elements and the national bourgeoisie, Ciccariello-Maher concludes the section on Fanon by claiming that ‘it displaces the narrow European dialectic by way of a “decolonial turn” in which the national unit of analysis is no longer sufficient – if it ever was – while the decolonial nation assumes an oppositional position within the broader unit of analysis that is the global-colonial totality of the world-system.’ (101) This displacement through the “decolonial nation” is what Fanon terms at the end of Wretched, against the national categories of the colonizer, a new humanity.

Ciccariello-Maher epilogues his exploration of Fanon’s dialectics with Dussel’s critical work on colonialism, particularly because it might stand as a counter-point to the concept of a decolonized dialectics. Dussel is suspicious of dialectics which he takes as being ‘always dangerously colonial, because it is internal to the system and points toward resolution through the gradual and selfsame expansion of that system.’ (110) That is, for Dussel, ontology ‘is by its very definition bound up in the enterprise of colonization; it is a logic of the same, an ideology that subsumes all that is different to a universal view.’ (109) Since dialectics, especially the Hegelian variety, concerns the ontological category of Being – a ‘totality [that] cannot admit the other as Other’ (109) – it is thus “totality-bound” and should instead be replaced by “analectics” (following Dussel’s decolonization of Levinas) that concerns “exteriority” and “the Other.” (110) In other words dialectics concerns the dynamic process of Being, colonialism is an assertion of the non-Being of the other, dialectics thus cannot account for the colonized other.

Admittedly my first encounter with Dussel was in Decolonizing Dialectics and so I found this last section, though extremely interesting, difficult to review. What I did appreciate, though, was the way in which the categories of interiority and exteriority were brought to bear on Ciccariello-Maher’s conception of dialectics and how he was able to incorporate (indeed, dialectically incorporate) Dussel’s supposedly antithetical analectics with a decolonized dialectics. ‘Whereas Dussel appears to reject dialectics,’ Ciccariello-Maher writes, ‘Fanon’s own embrace of dialectical motion depends on his radical decolonization and reformulation of Hegel’s master-slave dialectic, in which the subontological zone of nonbeing provides the source for subjective action to set history into motion.’ (118) The result, particularly found in Dussel’s concept of ‘the people’, is unity of the totality-alterity contradiction that ‘forespeaks a decolonial nation that is … a radically dialectical and shifting terrain of oppositions, and in which those oppositions turn as much outward as inward.’ (121)

To conclude this review I would like to make some critical points. The most significant problem is that a book about decolonizing dialectics is silent on the Maoist and Maoist-influenced tradition. Mao Zedong was renowned (and even judged heretical by some Western Marxists) for reducing dialectical logic to a theory of contradiction: the claim that “one divides into two” is more revolutionary than “two unite into one” was a demarcating line during the Cultural Revolution; since the same kind of ruptural notion of dialectics is the guiding thought of Ciccariello-Maher’s book, it is strange he ignored a tradition which, as I have argued elsewhere, is the predominant interpretation of Marxism in the global peripheries. The refusal to think through this anti-Eurocentric (but still Marxist) tradition results in the deletion of numerous thinkers and revolutionaries: Samir Amin, Anouar Abdel-Malek, Abdelrahman Babu, Charu Mazumdar, Joma Sison, Walter Rodney, and many others. The exclusion of these people contributes, I would argue, to some of the weaker moments of the book. For example, Ciccariello-Maher sometimes argues that the Marxist dialectic is teleological and that Marxism is blinkered by its Eurocentrism. While it is indeed the case that that teleology and Eurocentrism have been significant problems for Western Marxism, the tradition that developed in the peripheries and was in some ways influenced by the event of the Chinese Revolution, was not limited in the same way by these problems.

Connected to the above problem is the lack of engagement with the problematic of the theory of the national question that was extremely influential for anticolonial movements. The fact that the author engages with Mariategui but does not engage with this problematic felt like a missed chance. To Mariategui we could add the work of Ibrahim Kaypakkaya on this concept that placed dialectical thought in the service of decolonization, breaking with a chauvinist Turkish left and leading to Kaypakkaya’s martyrdom. I have long argued that the theory of the national question needs to be placed into a rigorous dialogue with the work of Frantz Fanon and other anticolonial thinkers, since both approaches to the problem of colonialism are not enough by themselves, and I think Ciccariello-Maher’s book, more than any other I have seen, possessed the ability to do so but, perhaps because of a lack of knowledge in this area, was unable to follow through on this implicit promise.

Another problem (which I probably found bothersome only because of my training in philosophy) is the lack of a coherent definition of dialectics. While the concept is defined by its symptoms and synonyms, or by mentioning Hegel’s Master-Slave dialectic there is a certain level of imprecision. Does he mean “dialectics” in the sense of the “historical dialectic” found in Hegel’s Phenomenology or does he mean “dialectics” in the sense of the logic of contradictions found in Hegel’s Logic? Kojève privileged the former and many of his students, including Strauss, were reactionaries. Hippolite privileged the latter and influenced thinkers such as Althusser. A much clearer definition of the meaning of dialectics or dialectical logic would have made this book more accessible to the lay reader, especially since it aims to reclaim a radical conception of dialectics.

These problems, though, do not undermine the strength and importance of Decolonizing Dialectics. Rather, they demonstrate that this book functions as an opening, by recentering dialectical reason and placing it in service of a radical anti-systemic practice, to successive discussions that may indeed engage with what could not be addressed in less than 200 pages. Indeed, in the book’s conclusion the author appears to conceptualize his work on radical dialectics as an activist opening by posing a variety of questions for revolutionary work that may possibly be answered by ‘a radically open-ended dialectics whose liberating violence alchemically transforms everything and everyone it touches.’ (170)