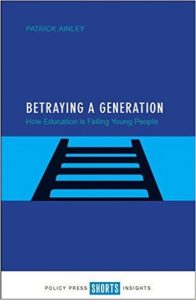 The title of Patrick Ainley’s book ‘Betraying a Generation’ is something of a twist on the type of statement often made by British official school inspectorates about how education – by which they really mean teaching professionals – is failing young people. Ainley fairly and squarely puts the blame for failure on the policy makers and the governmental bodies themselves and develops a series of arguments to justify their culpability. Early on, Ainley points out how ‘extravagant promises of success and achievement’ have been made to young people; they have been promised a future of professional achievement and prosperity if they do well in education, in reality these promises cannot be kept. Ainley traces an outline of the anatomy of this betrayal and its implications for education in Britain.

There are many reasons to welcome this book but two in particular are immediately striking. First Ainley’s focus is in considerable measure on the part of the British education system often referred to as ‘the Cinderella sector’; the education of young people in Further Education, who in the great majority are studying vocational and professional programmes or apprenticeships and who are not expected to go to university. In short Ainley’s book focuses on the post-16 education of young people who are from poorer backgrounds and in educational settings which are increasingly poorly funded. Indeed the sector which Ainley surveys is sometimes described as being ‘low cost for poor kids’. Ainley sets out to make a case for this sector to be afforded firstly more support and secondly more respect.

A second reason to welcome Betraying a Generation is because of the honesty and commitment of its author in swimming against the tide. Honesty because the Ainley presents a picture of the betrayal of young people and of the values of education which is very different to the sunshine stories so beloved of government bodies and the burgeoning new managerial class. Commitment because writing from a thoroughgoing left wing perspective Ainley like many others finds himself arguing for educational values that might be considered ‘traditional’, but which are today threatened by commercialisation and the idea of education as preparation for work, rather than for life.

It is a considerable achievement in a short book to start from the standpoint of education and to work outwards to take in issues of our wider society. In this book Ainley gives a sound overview of the interrelatedness of education and neoliberal society. In the second chapter of this book Ainley presents a considered and insightful critique of the ‘knowledge economy’ and shows starkly the divergence between its rhetoric and its reality. Again it is this divergence which Ainley quite correctly points to as the betrayal of so many young people. He shows how the idea of education being an important part of a democracy based on meritocracy has always been fanciful, and today the myth is even more threadbare than it was previously. In chapter 5 Ainley draws the contours of a progressive programme of reform for the post compulsory education sector. As I read the book I found myself thinking that it is exactly the type of thing which should be read by anyone who hopes for something beyond the dreary prescriptions of present governments in Britain and beyond. Education could be so much more than it is today, good for people like Patrick Ainley who not only keep the vision alive but also demonstrate its rationality.

Another way to look at Betraying a Generation would be to see it as an exposure, within the British context, of how social democratic approaches to education have been transformed into the cold calculations of neoliberalism, whilst the rhetoric of a well meaning reformism is retained. Nowhere is this truer than in the post compulsory phases of education on which Ainley concentrates. He succeeds in showing something of the particular nature of the neoliberal onslaught which has wrought far reaching negative changes within a sector that has always been undervalued. In the final section of Betraying a Generation Ainley gives an outline of how this educational sector might be developed along more democratic lines to help realise the potential it has to greatly improve the lives of those students who pass through it.

A feature of Ainley’s work which sets it somewhat apart from the typical evaluations offered by academics writing about this sector is his determination to follow his arguments to their logical, and reasonable, conclusions. All too often academic critiques of this sector are muted, either knowingly or because the writers view developments from the same perspective as that espoused by the policy makers. In many cases this type of critique is genuine enough in its intention, but it results in a view which sees so many retrograde developments as the result of policy which was ‘accidentally’ misconceived. Ainley squarely demonstrates that despite the glossy rhetoric the miserable results of such policies were so entirely foreseeable as to make it hard to argue that they were unintended. No wonder then that the word ‘betraying’ appears in the title; Ainley offers the reader an indictment of recent policy and what lies behind its formulation.

The book is published in a series titled ‘Policy Press Short Insights’, and this very well sums up Ainley’s achievement. As an introduction to a range of issues in what was once called post compulsory education it achieves the difficult balance between serving as an introductory text and doing justice to a range of arguments. The book is well referenced and the reader who followed up Ainley’s references would be well on the way to achieving a good knowledge of the educational sectors examined.