Marx & Philosophy Review of BooksReviews‘The Happiness Industry: How the Government and Big Business Sold Us Well-Being’ reviewed by Jared Smith 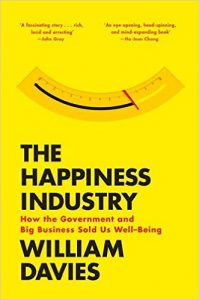 William Davies
The Happiness Industry: How the Government and Big Business Sold Us Well-Being

Jared Smith studied philosophy at the University of Georgia, and now works with technology in …

William Davies’ book, The Happiness Industry, begins with a monk walking into the World Economic Forum in Davos. Not a joke at all, this sets the tone of the book beautifully. Crowds of economic movers and shakers gathering in the Swiss Alps, in part, to hear from this monk, quantifiably the happiest person in the world. That scene alone says a lot about the subtitle: How the government and big business sold us on wellbeing. It might be natural to ask if wellbeing is something we have to be sold. After all, didn’t Aristotle say that all human activity aims at some good, the highest of which is happiness? Did things change sometime between Aristotle and Facebook and now we need convincing? Not exactly. The argument Davies sets out is that the current trends in happiness management and life optimization are part of a neoliberal zeal for quantifying and managing. Everybody wants to be happy. That’s why there is a market for it. That much seems obvious. But the Aristotelian happiness as human flourishing is incommensurate with neoliberal economics where means and ends must be measurable. The happiness being sold is not the Aristotelian concept but rather the limitless pursuit of self optimization.

Davies places the beginning of the happiness industry with Jeremy Bentham, the forefather of utilitarianism who initiated efforts to measure utility. He then traces the development through the work of early luminaries in economics and psychology. Whereas Bentham was content to just speculate about the appropriate measurement of happiness, German theologian and physicist Gustav Fechner began experimenting to find the empirical basis of one for his psychophysics. And while Fechner worked on an anatomical metric, English economist William Stanley Jevons reconsidered economics from the consumer perspective, thus turning the market into a tool to measure utility. The work of German psychologist Wilhelm Wundt in particular is worth noting. Besides creating the first laboratory for experimental psychology, he drew to Leipzig many American psychologists who would later exert tremendous influence in the advertising industry stateside. Which brings us to the telling case of John B. Watson, the leading behaviorist that left academia for Madison Avenue.

A century later, the legacy of Watson’s behaviorism dominates the discussions of many policy makers and corporate managers. Watson, of course, believed that observing behavior was all that was required to understand a person’s psyche. And with the proper understanding of the psyche, and the right stimuli, one could produce specific behaviors. You can see the same thinking still in practice today. In fact, it’s hard to miss. Governments on both sides of the Atlantic have established groups tasked with nudging the public this way or that. In the private sector, we can see the same trend in social marketing.

The social business obsesses over saturating social media with marketing that will convince the consumer that corporations just want to have fun. They send tweets gently poking fun at competitors. They give products away for free. They engage in gratitude campaigns, thanking customers and noncustomers alike. They compete in ‘best place to work’ competitions, in part, so their employees take on an additional role as ‘brand ambassadors’. All of which is in an effort to build relationships with customers that can be profited from later. Relationship building is key to this new paradigm – if it is in fact new at all. As Davies puts it, ‘the last thing a business wants from its customers (or their more valued staff) is for them to remember that they are in a market, with freedom of choice’ (186). You see this practiced by companies that have been around for a century and companies that have existed for six weeks. Being social implies the way business was done before was distasteful. Which in turn makes the new way of doing business friendly and generous by contrast. Even more so, in fact, than any PR campaign would on its own.

Davies attributes this behaviorist gusto to two factors. First, a strong belief that purely empirical methods can be used to predict behavior. The fact that we have moved from the psychologists of Watson’s era to highly mathematical data scientists making the same claims seems to give even more support to this view. The second factor is mass surveillance. Using cards for purchases, stats from our wearable technology and, of course, the information we offer up on social media all contribute to predictive data models.

Davies’ biting critique might be a bit overdone here. All the effort to quantify the self is not without some positive outcomes. The Durkheim Project is but one example. Using social media, it hopes to detect veterans at risk for suicide. The cognitive behavioral therapy field has gained more attention, as well as funding, and a great amount of effort is being dedicated to decreasing the stigma of mental illness. Arguably those things already get enough attention elsewhere, and Davies does make mention of them, but they are bright specks in a rather bleak picture here.

A competent historian might balk at the speed at which Davies weaves together advances in the science of happiness. But I’m not one and found it entertaining and very engaging. The only criticism I can make of Davies’ historical narrative is that the separation between utilitarianism and behaviorism is addressed only briefly and late in the book. The reader might wonder through the first 200 some odd pages just how Davies gets from one to the other. It’s certainly not the philosophical beliefs they share. They are, in fact, quite at odds. Utilitarianism values internal experience while behaviorism abides only the external and observable conduct of human beings. A common inclination to quantify is the thread that ties Bentham to Watson.

On the whole, though, Davies has added a valuable critique, and a fantastic read, to the current literature on happiness. Davies articulates what is so suspect about the contemporary passion for scientifically making people happier. In the process, he shows how we got here and positions this state of affairs in the current economic and political environment. Davies is not suggesting these entities have sinister motives – a point that an all too eager readership might easily miss. But he convincingly argues that the obsession over happiness and wellbeing has more to do with neoliberal goals than with human flourishing.