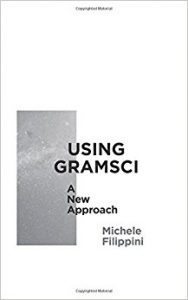 The 21st century has seen a strong revival of interest in Antonio Gramsci’s work, especially in the use of Gramscian concepts in a wide variety of disciplines. The Pluto Press book series, Reading Gramsci, offers Gramscian analyses of historical and contemporary events and studies on the relevance of Grasmscian thought (especially for the social and political sciences). In the ‘Series Preface’ Peter Ives and Adam David Morton observe that reading Gramsci ‘is no easy task. He plunges into the complexities of debates of his time that are now obscure to many readers and engages in an enormous range of topics that at first seem unrelated’ (xi). The task of individual volumes in the Reading Gramsci series is to ‘open readers to specific aspects of his work as well as raise new questions about our contemporary history’ (xi). Using Gramsci is the most recent addition to the series, in which Michele Filippini, Researcher in the Department of Political and Social Sciences at the University of Bologna, provides a new approach to the legacy of the great political theorist, and especially to his Prison Notebooks. Filippini is also the coordinator of the digital library Gramsciproject.org, a most useful tool for students of Gramsci, including a comprehensive bibliography of texts devoted to Gramsci (published in 2000-2015), and an excellent Gramscian dictionary (though available only in Italian).

Filippini’s interpretation of the Notebooks is characterized by an effort to highlight the explicit and implicit elements of Gramsci’s thought within an appropriate historical framework. The book is set within the context of the use of Gramscian theoretical instruments in a broad range of disciplines: ‘political science, education and pedagogy, language, cultural studies, international relations, subaltern and postcolonial studies, anthropology, geography’ (2). Filippini’s aim is to ‘provide scholars of these disciplines with an interpretation of Gramsci’s writings offering a precise historical/theoretical reconstruction … devoid of all the esoteric features that normally characterize a restricted and specific community of scholars’ (2). In order to accomplish this – admittedly very ambitious – aim, Filippini divides his book into six chapters each devoted to a specific key theme: ideology, the individual, collective organisms, society, the crisis, and temporality.

Chapter 1 deals with ‘Ideology’. As is well known, ideology plays a fundamental role in the Prison Notebooks, and Filippini stresses that the ‘various levels of ideology that Gramsci analyses – common sense, folklore, religion, philosophy (and science in art) – can … be arranged according to a scale of internal consistency, where common sense and philosophy represent the extreme of such a scale’ (5). In this chapter he discusses such issues as the historicity and context of Gramsci’s concept of ideology, the complexity of the conception of ideology, the truth and falsity of ideology, and ‘the conceptual constellation of ideology including hegemony’ (18). Filippini refers to Ferrucio Rossi-Landi’s study, Marxism and Ideology, where eleven meanings of the term ‘ideology’ are identified and a distinction between two categories of ideology is introduced: ‘ideology as a false consciousness (critical-negative meaning) and … ideology as a vision of the world (positive-descriptive meaning)’ (14). Filippini places Gramsci in between those two positions and devotes some space to Gramsci’s definition (the only one) of ideology: a ‘scientific, energetic, educational hypothesis that is verified <and criticized> by the real development of history, that is, it is turned into science’ (17). This definition, or rather description, comes from the Prison Notebooks, and is translated from the original by Filippini himself, who comments in the note that the italics are his, and are ‘designed to emphasize the constitutive role that the struggle and victory play in the battle of ideas, endowing ideology with scientific status, and thus with the status of truth’ (129, n. 51). Though the issue of ideology has been discussed in numerous studies, Filippini manages to offer a fresh account, especially by developing the ideas of Rossi-Landi and situating the Gramscian concept of ideology between the positions of Marx (of The German Ideology) and Lenin (of What is to be Done?). For Gramsci ideology plays a fundamental role with regard to the conditions and possibility of the revolution in the West; Filippini shows ways of ‘using Gramsci’ in ideological debates by concluding that ‘the consistency between theory and practice, between ethics and everyday conduct, and ultimately between the formation of a historical bloc and the break-up of a rival bloc, can only be obtained through this new theory of ideology’ (23). In this regard, Filippini also discusses the relations between the notions of ‘common sense’, ‘folklore’, and ‘philosophy’, stressing that for Gramsci folklore has a ‘negative, almost invariably reactionary value, which should be historically analysed as a sign of previous dominance in the realm of thought’; on the other hand, common sense ‘may contain progressive elements insofar as it is still a flexible expression of actual conditions, an expression of emergent classes’ (20).

In Chapter 2, ‘The Individual’, Filippini observes that Gramsci presupposes ‘a rather unusual conception of individuality that distinguishes him from the Marxists of his generation, and that reveals a sensitivity akin to that of the nineteenth-/twentieth-century social sciences’ (24). Sections of this chapter discuss the structure of the individual, compare the ideas of Durkheim and Gramsci, and Sorel and Gramsci, and once again turn to ideology, since ‘the ideological struggle within society must also be fought at the level of the formation of individuals’ (37). This is followed by Chapter 3, ‘Collective organisms’, which focuses on Gramsci’s concern – historical, theoretical, and practical – with parties, trade unions, associations, and all sorts of intermediate bodies. Here Filippini comments on some similarities in the thought of Max Weber and Gramsci, stressing that whereas in Weber it is the ‘political man’ who is capable of transforming existing political relations, in Gramsci it is the party, as the only possible political actor, that is willing to introduce necessary changes, thus ‘creating a new ‘mass intellectual’ capable of combining technical qualities and strictly political ones’ (52). This chapter also includes a discussion of Gramsci’s concept of ‘living philology’ (considered as an approach to the internal relations of a party), and the party as the modern Prince. Filippini concludes this discussion observing that Machiavelli is in Gramsci’s view ‘the symbol of modern politics, of that leadership of an emerging class that on the contrary by its very nature, should not be a leading class’ (64).

Chapter 4 moves from the individual and the collective to ‘Society’, the place where, according to Gramsci, the principles of order and the revolutionary potential are created. Filippini concentrates here on the organicism of society, the organic intellectuals and mass intellectuality, and notions such as coercion and conformism. He stresses Gramsci’s interest in the political value of social relations, interest ‘which remains a fundamental characteristic of all Gramsci’s writings [and which] constitutes a novel feature of contemporary political and sociological thought’, in other words ‘a repositioning of the political within a social context’ (84).

In Chapter 5, ‘The crisis’, Filippini focuses on Gramsci’s new interpretation of the classical Marxian conception of economic crisis. Gramsci’s theory of crisis is dynamic and polysemic, perceiving crisis ‘as a process rather than as an event, more as a contradictory development of the system than as an aspect of that system’s breakdown’ (88). Filippini shows how Gramsci’s concept of crisis changed over time with war no longer being ‘the event triggering this crisis of hegemony … of the leading classes, but merely a factor accelerating an ongoing process’ (87), and demonstrates that Gramsci’s historical and theoretical preoccupation with the notion of crisis, his elucidation of the ‘crisis of hegemony’ and ‘crisis of authority’, in short, his ‘political science of crisis’, remain inspirational today. Filippini’s supplementary analysis offers yet another tool for interpreting critical changes in the contemporary world within the domains and areas not discussed by Gramsci, and stresses that ‘it permits the identification of an open field of inquiry, of a materialistic interpretative framework, by means of which the capitalistic system as a whole may be studied and challenged’ (88).

In Chapter 6, devoted to ‘Temporality’, Filippini offers a fresh look at the complex temporal structure of Gramsci’s work and stresses the dual character of time inherent in the Prison Notebooks. In his discussion of temporality Filippini moves from the theory of personality (the individual), to common sense and language (collective organisms), and finally to the distinction between East and West (society). In his very interesting discussion concerning temporality and language, Filippini observes that ‘the temporality of duration, linguistically represented by the plurality of dialects and languages competing for prestige, is superimposed by the epochal temporality of national languages, which are the only ones that can enable a strong link to be established between popular culture and national politics, between the people and the leading groups’ (112). This fragment very well demonstrates the merits of the project of ‘using Gramsci’, elegantly tying together various strands of the political and the ideological.

In the short Conclusion, Filippini remarks that Gramsci ‘constantly reformulated and reutilized the vocabulary of other theoretical traditions different from Marxism – such as sociology, anthropology and linguistics – which today, 80 years after his death, has been revived in contemporary debates’ (122). Filippini has managed to show Gramsci from both the historical and very recent perspectives, and to choose the most interesting and inspiring aspects of his thought, avoiding oversimplification and arbitrariness. Additionally, he refers to numerous sources (as diverse, as, for example, works by Althusser, Badiou, Benjamin, Bukharin, Mannheim), pointing to possible areas of further comparative research and fresh interpretation of Gramscian thought.

The conclusion is followed by copious endnotes (more than 30 pages) providing additional information and interesting comments on the discussed issues, and a very detailed bibliography (another 12 pages) divided into several thematic sections.

In the famous final thesis on Feuerbach, Marx observed that ‘The philosophers have only interpreted the world, in various ways; the point is to change it’; more recently, Peter Sloterdijk (in Die Verachtung der Massen) has claimed that philosophers have only pandered to the society (and its values), whereas they should rather provoke it. Gramsci’s writings help interpret the world, they aim at changing it; they definitely do not pander to the society, though they do provoke action. Recent developments in the world have resulted in renewed interest in Orwell’s 1984 and Arendt’s The Origins of Totalitarianism. Whereas Arendt’s oeuvre is studied in order to understand the world, the work of Gramsci might provide appropriate tools to interpret and change contemporary society. As observed in the Introduction of the reviewed book ‘Gramsci reformulated the Marxist vocabulary of his time, and one century later has provided us with a conceptual toolkit that can be used to understand the contemporary crisis of a world that Gramsci himself had witnessed emerging’ (3). Michele Filippini’s Using Gramsci provides a concise and lucid guide to the Sardinian’s intellectual and practical toolkit.