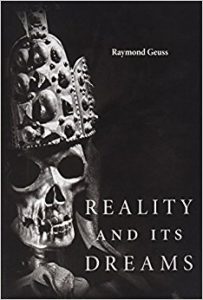 Raymond Geuss
Reality and Its Dreams

Jack Blaiklock is studying for an MA in Continental Philosophy at Warwick University. …

Raymond Geuss’s latest collection of essays showcases all of his usual erudite perceptiveness. The collection represents a development and extension of the approach to philosophy of his previous books, rather than a radical departure. In the preface, Geuss tells us that the essays “are held together by a certain outlook” (ix). This outlook is defined in opposition to what Geuss calls the “normative turn”, or “normative (counter)revolution” in political philosophy. This is the shift that took place in the 1970’s in Anglophone political philosophy, away from more ‘historically and sociologically sophisticated views about ethics and politics developed in the period of Hegel and Marx’ (ix). The turn was initiated by philosophers like John Rawls and Robert Nozick, who propounded forms of political philosophy that sought to do without such historical and sociological insight. Political philosophy was to proceed by appeal to a ‘purportedly pure normative realm’ (x). The assessment of political action would not make reference to real politics or actually obtaining conditions in any really existing society. It would rely on appeal, variously, to ‘moral intuitions’ or thought experiments, carefully constructed so as to appear to be as ahistorical and as sociologically general as possible.

Geuss has given his objections to the normative turn before, and at greatest length in Philosophy and Real Politics. In this collection, his objections are developed most directly in the first essay, entitled Dystopia: The Elements. This is a revision of a response to unpublished papers (apparently on Geuss’s philosophy) by Richard Raatzch & Jörg Schaub. Geuss defends his previous approach to Rawls, Nozick, and their disciples. The main objection to philosophers of the normative turn is that they want philosophy to be analytic, but not critical (12). They want to accept some realm of putative facts, and try only to describe these facts and analyse the possible range of actions open to us, given these facts. Their questions take the form of “given that we react in a certain way to the thought of the veil of ignorance, how should we behave?” Geuss wants to challenge this role of putative facts for political theory. He argues that their acceptance of is the result of a lack of imagination, and that all of the facts that could be relevant for deciding action are historically contingent and so open to criticism, that is, open to evaluation and subsequently to a denigration that might lead to their dismissal. Any plausible universal fact about any human society, such as “we need to eat to survive”, will be, Geuss thinks, so underdefined that they are not action guiding. The problem with making philosophy exclusively about analysis is that the lack of critical capacity will leave us unable to challenge the status quo and so tend to entrench existing power structures (24).

The approach to political philosophy and ethics that Geuss himself endorses would be highly context dependent. Geuss is careful to distinguish between what he calls in the second essay (“Realism and the Relativity of Judgement”) “contextualism” and “relativism” (40). Contextualism is, according to Geuss, the benign view that the answer to practical questions must depend on the particular context of the question. Relativism is the view, seen by some philosophers as a threat to our ability to make value judgements—or in some cases judgements of any kind—that there is no final, categorical, or absolute framework for judgement and so all judgement is impossible. Relativism gets its teeth from “an assumption that goes back to Plato” (40, 61) that statements can only be reliable guides to action if they can be understood in terms of some absolute framework. According to Plato, the pilot’s ability to get the ship across the river only amounts to real knowledge if she can also tell us whether or not it would be better to cross the river. Geuss thinks this assumption is wrong:

To say that this piece of advice or guidance is not real guidance because it is only relative to my situation is to miss the point, which is that I am in this situation and all I need is guidance in it. (41)

The claimed need for an absolute framework is spurious and so the threat of relativism is toothless.

The seventh essay, The Moral Legacy of Marxism, explicitly addresses Marxism. As Geuss notes: ‘To speak of the ‘legacy’ of something is to consider it as being dead’ (91). What death means in this context is that Marxism has come to ‘seem deeply implausible or irrelevant to a sufficiently large number of members of society’ (93). The death of Marxism is not something Geuss argues for here; he takes it as an established fact. But Geuss thinks Marxism ‘contained elements which deserved to be carried forward and cultivated’ (94). The “deserved” is important here. Marxism is not an established feature of contemporary thought, and we do not live in a society that has their roots in certain features of Marxism. This is a fragile legacy, which runs counter to the dominant current of Rawlsian Liberalism and is for that reason all the more important to preserve and nurture. One particularly important element of Marxism, for Geuss, is the idea that society is a totality, ‘that is, it is an entity composed of individuals-in-historically-specific-social-relations, which is oriented toward satisfying historically arising needs and reproducing itself through social action’ (101). We cannot take individuals as the starting point for ethical or political reflection, as Rawls, Nozick, and many neoliberal economists attempt to do, but must recognise that individuals are always embedded in and structured by the totality to which they belong. Recognising this leads to something like the contextualism discussed above.

One might wonder whether the attention Geuss pays to the philosophers of the normative turn is really merited, especially given the dim view he takes of the results of their philosophising. Discussion of these philosophers will, of course, be of relevance to anyone with a prior interest in their arguments. But Geuss thinks that there are reasons for people who are interested in society more generally to pay attention to Rawls, Nozick, and the rest. Geuss sees them anthropologically; analytic philosophers are the “witch doctors” of ‘contemporary “liberal” societies’ (14-15). In this capacity, they make particularly good objects of study. They are members of society, whose actions and statements may tell us something about that society, just like any other member. However, they are also ‘likely to have especially articulated views’, and so ‘they may be particularly good at explaining what the people involved in these practices think is going on in them and why they engage in them’ (14). They can thus act as “informants” on the practices of contemporary liberal societies, as well as being participants in them.

The question, then, is whether political philosophers have the privileged position relative to contemporary liberal societies that would justify taking them as privileged objects of study. Are they more useful sources of study than any other social groups? That they have especially articulated views is not enough to guarantee this, if we do not also have some reason for thinking that the views of political philosophers tell us something about society as a whole, rather than just something about one peculiar and recherché subgroup, i.e. political philosophers themselves. The traditional view would be that political philosophers’ accounts of society are privileged because they have thought especially hard and well about society. However, this is a view that Geuss resoundingly rejects; Rawls, Nozick, and the rest are fundamentally mistaken. Geuss’s claim that the anthropology of “analytic philosophers” has some special role to play in the study of liberal society thus seems to stand in need of further justification.

This is a minor complaint. Geuss often orients himself relative to Rawls, Nozick, and the “normative turn”, but it would be a large mistake to think that this book is only of interest to readers well versed in Anglophone political philosophy. This is a wide-ranging book, with plenty of thoughtful and provocative things to say. Geuss, as always, offers an invigorating antidote to much contemporary philosophy.