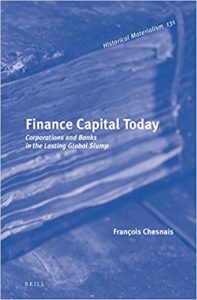 Francois Chesnais is a French Marxist of long standing. “Finance Capital” is his attempt to apply the categories that Lenin and Hilferding developed in their analysis of imperialist financial capital, to the period of contemporary financialisation particularly after 2008.He considers this to be a “lasting global slump” or “long depression” (3), a crisis of capitalism “tout court” (12). This is then a work of catastrophist orthodoxy, closely echoing the main stream of contemporary Marxianism.

For Chesnais the world crisis consists of a “downward trend” (1) in growth, investment and profit. It has been ongoing since the 1970s in the West. This crisis isnot then one of social turmoil.There is no attempt to either explain or analyse how a claimed economic collapse can be reconciled with an almost total absence of the class struggle. This “crisis”persists in spite of a practically total lack of social crisis.

Chesnais sustains his stagnationist thesis by systematically underestimating the impact of creation of globalisation on world capitalism. According to Chesnais the doubling of the world labour supply that resulted from the integration of the transitional economies into the world market could more properly be described as an increase in the “potential global industrial reserve army” (41). Presumably China’s 150 million industrial workers could more properly be described as “potential”unemployed? In any respect growth in Chinahas seen a “marked slowdown” after the “collapse of its stock markets” (3).But how pronounced is this downward trend? According to the World Bank (not cited by Chesnais) World Fixed Capital Formation was 1966 23.7% and 2015 23.8%. According to the IMF (cited by Chesnais)world growth is around 3%. Do such innocuous figures really provide proof of a capitalist slump?

Chesnais downplays the significance of a genuinely global market for capitalist accumulationso his analysis feels out of date. There is a review of the liberalisation of financial markets with the end of the post war boom. Much is made of the rise of debt as a proportion of GDP. There is a discussion of interest bearing capital and debt and of the organisational embodiments of finance capital concentrating on the USA and Europe. Although Chesnais takes inspiration in his use of the term Finance Capital from Hilferding and Lenin, there is only a little analysis of how finance capital exploits emerging nations, of national oppression or the labour aristocracy. Chesnais’ emphasis is more on the mechanisms for financial trading themselves and the instability injected into the world market by the obscure and unregulated nature of these trades. Chesnais relates the growth of finance and transnational corporations to Marx’s categories, particularly focussing on fictitious capital. There is a discussion of how foreign direct investment can be measured and this is related to value chains, and changes in retail conglomerates, although this is not effectively related to unequal exchange or the exploitation of emerging markets.There is a discussion of mergers and acquisitions and foreign exchange trading. This is related to the growth of derivatives and contemporary developments in banking. The impact of the deregulation of banks and financial institutions in the run up to the credit crunch is assessed. While much of this information is useful and informative, it is separate from developments in manufacturing, technology and the shift in power away from the traditional Western centre of financial imperialism. The conflation of the potential for crisis wracked stagnation inherent in financial capitalism with actual stagnation and crisis, prevents a measured assessment of how developments in the financial system relate to the productive base of capital accumulation.

The reader is left to puzzle over the intended audience for this book. The rise of financialisation is well documented by various sources, the mechanisms of debt trading and the potential chaos they inflict on the world economy, their role in the crash of 2008,are well discussed. Derivatives may have been weapons of mass destruction, threatening the stability of the world economy, but they had only a peripheral role to the last crash and have done nothing really since. The discussion does not feel technical enough to really add anything new, and as a popular summary itcovers familiar territory.

In the conclusion Chesnais bemoans the marginalisation of Marxism from the academic mainstream.The world “tout court” crisis of capitalism appears to leave the rich ever richer, their rule secure and unchallenged in society and the academy, which continues along quite happily, immune to the crisis tout court. Chesnais thinks that telling this“truth” is a revolutionary act. He believes that the Marxians must persist with their stories of collapse even if no one listens.Must they?