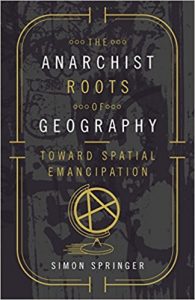 Simon Springer
The Anarchist Roots of Geography: Toward Spatial Emancipation

In The Anarchist Roots of Geography, a “proverbial call to nonviolent arms,” Simon Springer discusses some of the past, present, and future relationships between anarchism and geography. He mobilizes the thought of Pierre-Joseph Proudhon, Peter Kropotkin, Elisée Reclus, and Lev Tolstoy to denounce global capitalism and oppression—declaring, with Kropotkin, that anarchism is “what geography ought to be”—while also affirming the more contemporary approaches of Saul Newman and Todd May, who have advanced the idea of “post-structuralist anarchism” in opposition to classical approaches through a turn to thinkers like Michel Foucault, Gilles Deleuze, Félix Guattari, Jacques Derrida, and Judith Butler, among others. Springer therefore presents his own perspective as amounting variably to “anarchism without adjectives” or “post-anarchism,” neither of which is the same. The former refers to the synthesist approach favored by Voline and others in opposition to the anarcho-communist Platformism advanced by Nestor Makhno, Peter Arshinov, and other exiled militants following the defeat of the Russian Revolution. Post-anarchism, a more recent development, integrates the nihilism, irrationalism, and defeatism of postmodern analyses in expressing opposition to social revolution and universalism as “totalizing narratives.” In this way, while The Anarchist Roots of Geography provides many compelling insights, it itself presents a synthesis of a number of anarchist or anarchistic approaches that cannot so readily be melded together.

Springer’s main project in this volume is to bring geography back to its radical anarchist roots, thus issuing a course correction of sorts beyond those set by the hegemonic presence of Marxists within academic geography departments starting in the late 1960s. The author presents the works of Kropotkin and Reclus as luminous alternatives to the ethnocentrism and state-centricity that has plagued the discipline since its origins. Springer wishes to wield anarchism, defined as the practice of mutual aid with the concern for universal geography in mind, to undermine statism, capitalism, racism, sexism, heterosexism, imperialism, and speciesism (or anthroparchy). For him, anarchism is the “only meaningful form of postcolonialism” (38), as the State-form effectively continues colonization even after formal independence, and—following Reclus—it must centrally express concern for the integrity of the planetary system by means of nature conservation, vegetarianism, and opposition to animal cruelty. Springer here traces the philosophical arc linking Reclus with social ecology and the animal-rights and animal-liberation movements. The author holds that direct action, cooperation, and prefigurative politics can allow humanity to affiliate by free federation, reestablish equality among humans, rebuild the commons, and overturn the domination of nature. Taking after Proudhon (1840), who analyzed property as originating in the Roman concept of sovereignty, or patriarchal despotism, Springer defines property as violence and calls for insurrection—but not revolution—against oppression. Echoing Reclus, he emphasizes the place of beauty in the struggle, citing Albert Einstein’s view that “[o]ur task” must be to “wide[n] our circle of compassion to embrace all living creatures and the whole of nature in its beauty” (137), and he declares the importance of unity for anarchy, in parallel to the teachings of Taoism, Buddhism, and Baruch de Spinoza.

Some of the specific suggestions Springer makes for future research into the intersection of anarchism with geography include the following topics:

In advocating an anarchist understanding of geography, Springer seeks to depose the dominance of Marxian and Marxist approaches within the discipline, holding these responsible for the perpetuation of

State-centric analyses in place of a geographical exploration of alternatives to the State altogether. Springer argues against Marx’s statism and “dialectical” enthusiasm for colonialism, defending instead the anarchist emphasis on the need for consistency between means and ends. Stating openly that “[f]lirtation with authority has always been a central problem with Marxism” (158), he discusses how anarchists do not share Marx’s positivistic-utilitarian enthusiasm for the centralizing and despotic features of capitalism. In the anarchist view, capitalist exploitation and imperial domination are not considered necessary parts of the Geist. “The means of capitalism and its violences do not justify the eventual end state of communism, nor does this end justify such means” (52). For Springer, then, anarchism is a more integral approach than Marxism, as the former recognizes the multiple dimensions of oppression in opposition to the latter, which is said to focus almost exclusively on class, while misrepresenting anarchism as being opposed only to the State. Springer believes that Marxism allows no space for addressing oppressions outside of exploitation. Moreover, anarchists prescribe action in the here and now, rather than advocating a dialectical waiting period until the “objective conditions” are supposedly ripe.

Indeed, Springer shows how Proudhon’s analyses of property, the State, wage labor, exploitation, and religion were highly influential for Marx, despite the fact that the German Communist was reticent to acknowledge as much. As Proudhon wrote after Marx’s diatribe against him in The Poverty of Philosophy (1847): “The true meaning of Marx’s work is that he regrets that I have thought like him everywhere and that I was the first to say it.”

Springer also communicates the anarcho-syndicalist Rudolf Rocker’s view that it was Proudhon who first expressed the labor theory of value, and he hypothesizes that it was Kropotkin’s years spent in Siberia which led this anarcho-communist to emphasize a naturalist, decentralized, agrarian, and cooperative vision for the future, in contrast to Marx’s centralist and industrialist-positivist views. For the present and future, the author calls for the creation of radical democracy, which arises when la part sans-part (“the part without part”) intervenes to disturb the established sovereign order, rebuilding the commons where now prevail exclusive spaces, whether they be private or public. Springer particularly endorses Murray Bookchin’s concept of the “Commune of communes” as a restatement of the “continua[l] unfolding” of organization by free federation, and affirms Giorgio Agamben’s conceptualization of struggle to be a means without end, or infinitely demanding (Simon Critchley).

Springer certainly presents several critical contributions to a revolutionary analysis and understanding of geography. Yet as stated before, there are philosophical and political tensions among the variegated sources he calls on to develop his argument. To take one example, he initially affirms the views of several classical anarchist revolutionists but then challenges Neil Smith’s call for a “revival of the revolutionary imperative” against capitalism and the State, preferring instead insurrection—defined as prefiguration, spontaneity, and a Stirnerist sense of disregarding oppressive structures rather than overthrowing them—because revolution is putatively governed by a “totalizing logic” and somehow “ageographical” (68). This questionable understanding of revolution to the side for the moment, it bears clarifying that Max Stirner was a reactionary individualist whose views are incompatible with those of the anarcho-communists. Yet this lapse on Springer’s part is one with his general approach of blurring distinct anarchist philosophies with ones that may seem anarchistic—most prominently, post-structuralism. To return to the question of revolution, the author favorably reproduces Newman’s dismissal of social revolution as a rationalist, Promethean, and authoritarian project, noting that “not everything needs to be remade” and that revolution is inseparable from tyranny (88). This attitude fundamentally contradicts the thought of Bakunin, Kropotkin, Reclus, and other anarchist militants. Indeed, absent a commitment to revolutionism, it becomes difficult to claim that “post-structuralist anarchism” is anarchist. The same is true for “post-anarchism,” a category that Springer embraces on multiple occasions in the text. To weld “post-anarchism” together with classical anarchism would require more than passing references to the supposed superiority of more contemporary anti-essentialist perspectives informed by Foucault, Butler, and company. Amidst the Sixth Mass Extinction, the accelerating destabilization of the climate, and Donald Trump’s war on the scientific method, why should we accept post-anarchism’s rejection of science, truth, and ethics? In point of fact, classical anarchism shows itself more appropriate to the times.

In distinction to the author’s endorsement of post-anarchism, Springer’s Tolstoyan advocacy of a peaceful uprising is intriguing but not entirely clear. The author argues that anarchism typically had a pacifist orientation to social change before Errico Malatesta, Alexander Berkman, and other militants came to publicly endorse tactics of assassination. Springer fails to mention that Kropotkin did so as well, and he misrepresents Emma Goldman’s trajectory as initially being supportive of counter-violence but then coming to pacifism by her life’s end—for the geographer overlooks Goldman’s support for armed struggle in the Spanish Revolution. Like Goldman, Springer is not a strict pacifist in that he allows for violent self-defense and endorses insurrection as forms of “permanent resistance.” Still, he is not very precise in the parameters of violence, nonviolence, and self-defense he discusses. What is clear is that the very possibilities for peace and emancipation require a different society. In this sense, Springer’s citation of Edward Said is poignantly apt: the “stability of the victors and rulers” must be “consider[ed] […] a state of emergency threatening the less fortunate with the danger of complete extinction.” Under the prevailing conditions in which capitalism and militarism indeed threaten human survival and planetary integrity, Springer is correct to emphasize the importance of “perpetual contestation” and “[e]xperimentation in and through space” (3). We must become the horizon!