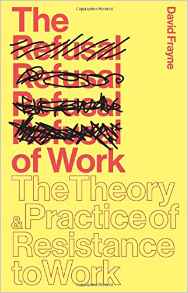 The distinction between waged labour and other forms of productive human activity is well trodden territory in Marxist labour theory. There is little contention in asserting that even under contemporary conditions of global capitalism there exist myriad spaces for emancipatory productive activities outside of the alienated forms of commodity production. The question that always remains, however, is to what degree such activities hold the potential for an alternative to the domination of the society of work, of the subjective discipline enforced by the spirit of capitalism. Common lines of flight – escapes into craft industries, entrepreneurial forms of refusal, dropping off the grid, and the like – often confront this tension from the standpoint of the individual worker, doing little to challenge the structures that impose this instrumental relationship to work.

It is this mode of resistance that David Frayne attempts to confront in his book, The Refusal of Work: The Theory and Practice of Resistance to Work. Frayne positions his study by considering a wealth of contributions to the theory and sociology of work from the Frankfurt School to the Italian Autonomists and beyond, to the work of contemporary labour critics the likes of Kathi Weeks and Andre Gorz. What is exposed in his reading of this body of literature are the various ways in which workers have attempted to find the cracks in the hegemony of what Frayne calls the “work dogma,” and his contribution in this book is an exploration of these fissures through a series of interviews with shirkers, soldierers, and otherwise untraditional working people. It is through interactions with these contemporary work resistors that the author probes the political efficacy of today’s interstitial approaches to work refusal, ultimately concluding that although these example offer some hope, there does not currently exist a cohesive anti-work political movement.

Of course, to adequately theorize work refusal one must first diagnose the problem with work. Central to Frayne’s critique of contemporary society is the colonization of leisure or non-work time with work-related activities. Similar to the social factory thesis, non-work time in Frayne’s view has become an annex for productive activity, the worker reinforcing her need for work through increased consumption and the never-ending pursuit of employability. She sacrifices unalienated time in pursuit of increased buying power and simultaneously self-polices her behaviour under the panoptic gaze of the spectral future employer. One needs only think of the young employee who selectively curates her social media feed to ensure that its content or tone does not raise red-flags during the real or expected period of surveillance during a hiring competition. However, this dynamic is not limited to periods of job seeking. “Unlike traditional exploitation, which is limited to clocked-in time and imposed externally,” Frayne explains, “through the coercive discipline of bosses and technological control, the discipline demanded by employability is continuous and requires a constant self-policing” (p. 77-8). Frayne likens this phenomenon to a “decentred exploitation” that encourages the worker to internalize work discipline and voluntarily carry it with her into daily life. As such, work does not stop with the punch of a timecard or the powering-down of an office terminal, but, instead continues to function ideologically as a moral constant in daily life.

In probing modes of work resistance, Frayne interviewed 19 individuals with varying approaches to refusal from experiments with cooperative living to stepping back from high-pressure careers and on to intentional unemployment due to health and wellness concerns. For many of Frayne’s participants, refusal was not so much a political act as it was a deliberate pursuit of a more fulfilling, less stressful existence. Although many of Frayne’s respondents reported a “breakpoint” or moment of critical consciousness leading to a desire to resist, the rather disjointed character of this sample does lead one to question what conclusions should be drawn from their individual experiences in resisting traditional employment. Ultimately, the author’s research revealed a lack of connection between the personal practice of work refusal and a post-work political program, characterized by a cynical escapism rather than a coordinated demand for social change. The danger of such an approach is that it does little to challenge systems of power, functioning in much the same way as the ‘commodified dissent’ of the proverbial Che Guevera t-shirt, existing as “an act of resistance that provides an illusion of empowerment, whilst ultimately leaving the world unchanged” (214).

Bleak as this might sound, Frayne’s book reveals the moral justifications as well as the imaginative strategies of individual work resistors, and, by extension, takes a small step toward the development of a post-work political program. Additionally, in calling into question the disciplining and depoliticizing effects of work-life-balance discourse, Frayne begins the work of imagining what steps would have to be taken to truly free de-alienated productive activity. For Frayne, the first step in doing this comes in the form of a collective demand of a reduction of working time. Of course, we should add that such a demand would only fulfill its purpose if it co-existed with a truly anti-capitalist demand. Although this is not addressed directly by Frayne, we should recognize that a shorter working day and an even distribution of productive work cannot function alongside a regime of capitalist legitimation that depends on a standing reserve army of the unemployed. This said, Frayne recognizes that this new “politics of time” should be seen as a gradual program to free the consciousness of workers. In reasserting the separation between working and nonworking time, the reasoning goes, this program would free workers to form communities, engage in political debate, and generally produce what they will. Frayne’s list of potential demands – the shortening of the working day, a move toward a universal basic income – will likely remind many readers of the project of Nick Srnicek and Alex Williams’ (2015) Inventing the Future.

By way of closing, some attention should be paid to the potential deficiencies of Frayne’s conclusions. Frayne’s interview sample of 19 resistors with diverse motivations and methods stands out as rather narrow when viewed alongside his conclusions. This is particularly true of his claim that “there appears to exist no cultural movement that currently has the potential to develop a politics of time” (227). The trouble here is not necessarily the conclusion but the road to getting there. For all the time spent interviewing individual resistors, more attention to autonomous movements actively creating alternatives to the world of work are necessary before dismissal (take, for example, anti-capitalist cooperatives, autonomous factory occupations, and the formal organization of dispersed workforces like freelancers). Frayne’s nearly sole focus on individual work resistors obscures the terrain of contemporary struggles, reducing the act of refusal or resistance to an individual decision mediated by individual interests rather than by any kind of class solidarity. Moreover, in approaching the problem from this individual angle, Frayne mischaracterizes the politics of work by extending the ethos of these individuals to contemporary movements as a whole. Given his sample and approach, his claims that “it appears that there exists no social movement with the capacity to knock work from its pedestal at the centre of society” (p. 209) fall flat against the disparity between the individualistic acts of refusal that he is confronting and the collective strategies that he fails to address. Although I would agree that this individualistic politics of refusal is limited by its critical horizon and temporary nature, to grapple adequately with the politics of work refusal one must delve into the prefigurative movements that currently exist, something that Frayne, unfortunately does not do. This should not be read as dismissal of Frayne’s conclusions or the empirical examples that he was able to mobilize in a critique of the current trend of refusal politics. However, it should be read as a caution that the claims of this book are best situated against the backdrop of the post-crisis period of working class organizing and that to address only the “folk politics” (Srnicek and Williams 2015) of refusal without recognizing simultaneous acts of collectivity and struggles for commonality is to foreclose the potential alternatives that these movements prefigure.