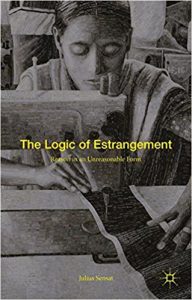 Julius Sensat
The Logic of Estrangement: Reason in an Unreasonable Form

In the 1960s and 1970s, Julius Sensat participated in the international youth radicalization, but he was from the start also quite critical of its theoretical deficiencies. In 1974, he hit the academic spotlight in Germany, when he published (with Marc Linder), a four-volume Marxist critique of the standard neoclassical economics textbook by Paul A. Samuelson. In that era, the concepts of ‘human alienation and reification’ were a prominent theme in youth culture; many Marxist, humanist and existentialist texts were published on the topic.

The logic of estrangement returns to this theme, half a century later. It comprises six original essays, drafted or written at various times, and with different concerns in mind. They were reworked into an integrated narrative, and complemented with an introductory chapter outlining the progression of arguments. Broadly, it is an intervention in contemporary Critical Theory.

The introductory chapter starts with an intriguing quotation from the young Marx: ‘Reason has always existed, just not always in reasonable form’ (p. 1). Sensat claims that a similar theme occurs in Kant, Hegel and other German idealist philosophers, as well as in Lukács, the Frankfurt School and in John Rawls’s writings. His argument is that (i) an ‘essentialist’ view of estrangement as ‘separation from a human essence’ is a religious, spiritual or metaphysical conception, which should be rejected in favour of a modern, ‘scientific’ account which can be empirically verified; (ii) ‘estrangement or alienation’ (they are considered as equivalent terms) is a social condition in which ‘reason is realized in an unreasonable form’, which fails to reach reason’s intention, and systematically produces unintended effects, (iii) the resulting human predicament is that people’s own powers are turned against themselves, so that they block or distort the realization of their own freedom, (iv) critical philosophy can point ways out of this conundrum, by showing how people create and reproduce their own estranged predicament, (v) estrangement can be abolished only through a transformation into ‘a new kind of social unity’ (p. 4), and (vi) the abolition of estrangement is equivalent to the attainment of full human freedom.

A more complete treatment would ‘trace the history of the idea of estrangement back to ancient times’ (p.4), but Sensat limits himself to some of the main ideas in circulation since the 18th century. He distinguishes between ‘social estrangement’, in which people unwittingly produce and reproduce an estranged social world, and ‘existential estrangement’, in which individuals live their own lives in an inauthentic or alien way (a theme of existentialism). His focus is exclusively on the former, and not on the latter.

Chapter 2 portrays Immanuel Kant as an ‘incipient philosopher of estrangement’ (p. 12). Kant offers a rationalist justification for the moral life, via a system of principles for reasoning, judgement and action. If these principles are accepted, internalized and applied, as Kant envisages, we cannot fail to approximate the good life and the fullest freedom. Yet, human beings have free will, and can make their own choices. If they choose evil, they become alienated from their own real nature, from their fellow human beings, and from God. What then can ensure, that people choose the good, with the appropriate moral reasoning? How can individual free wills be reconciled with what is good for society as a whole? For Hegel, this can ultimately only be achieved by the state and obeying just laws. Hegel criticizes Kant’s concept of moral deliberation as flawed and estranged, and is much more ambitious: he elaborates a grandiose, optimistic idea of Reason as an all-encompassing Logos of history, which realizes itself through the activity of individuals, and which tends to evolve eventually toward the realization of a free and morally good society, however complex or convoluted that process might be.

In chapter 3, Hegel is portrayed as the ‘quintessential philosopher of estrangement’ (p. 42), for whom estrangement is the antithesis of freedom. ‘Since reality is thoroughly intelligible, reason is at work within it, and hence it can be brought into reasonable form; but until it is, it is reason in an unreasonable form’ (ibid.). The task of philosophy and the sciences is to help bring reality into a reasonable form, thus overcoming estrangement and realizing freedom. Moral behaviour can attain objectivity and realize itself, by transforming itself into a ‘system of ethical life’, the pillars of which are the family, civil society and the state (p. 60). Hegel devotes many of his texts to explaining how these institutions could form a coherent, integrated and rational whole, based on market trade, contractual obligations and private property, regulated by just laws.

That leads Sensat directly to Marx’s critique, which regards Hegel’s scheme an idealist illusion, which constantly inverts the relationship between social phenomena and the concepts of those phenomena, so that social phenomena are seen to arise out of their concept, rather than the other way around. It is not just that the force of abstract moral reasoning is incapable of realizing the regulation of moral behaviour, but that through the very exercise of their rights in civil society, people unwittingly turn themselves into ‘playthings of alien powers’ (p. 72). The more people become dependent on markets, the more markets become independent of them. They turn into an abstract social force which escapes from their control, and dominates most of what they do. Thus, for Marx, Hegel’s ‘system of ethical life’ is itself a ‘system of estrangement’, and estrangement persists, however lofty the ethical proposals might be.

Why estrangement persists, is the subject of chapters 4 and 5. Here Sensat concisely explains Marx’s analysis of capitalist production and its main economic laws. Its basis is the exploitation, alienation and subordination of workers’ labour by the owners of the means of production. The more capital that workers produce, the more they become subordinated to the requirements of the accumulation of capital. This narrative and its implications are well-known, but what Sensat emphasizes here is a ‘double inversion’: the idealist or ‘doctrinal’ inversion of the real causal chains in economic life is, for Marx, the ideological reflex of a real inversion in social relations, in which commodities, money and capital (‘things’) begin to dominate the lives of all citizens, with many alienating and reifying effects. Kant’s and Hegel’s envisaged social unity and harmony cannot be realized in bourgeois society, because structural conflicts between the social classes and alienated labour rule it out. Tucked into this discussion is Sensat’s proposed solution of the famous transformation problem raised by Ladislaus von Bortkiewicz, with the aid of vector algebra (a mathematical appendix is included).

So far so good, but now the question arises of the mechanisms by which the verkehrte Welt is produced. Marx, Sensat argues in chapter 6, left it unclear how ‘the process of reification or real inversion gains and maintains its hold on the agents caught up in it‘ (p. 131), although Marx did believe that there are ‘scientifically and respectable answers’ to this problem (ibid.). Sensat’s own answer projects a concept of rationality as ‘deliberative control’ (p. 132), a distinction between independent and collective agency as ‘socially specific ways of realizing this conception’, and a notion of extrinsic information deriving from ‘treatments of extrinsic uncertainty in general equilibrium theory’, as well as ‘efforts to integrate game theory and decision theory’ (p. 131). The conclusion of his model is, that estrangement could be abolished if individuals could ‘regard themselves as acting collectively, as participating in the realization and maintenance of their free social world’ (p. 155).

In the concluding chapter 7, Sensat turns to John Rawls’s theory of justice, which holds out the promise of actualizing a ‘well-ordered society’ (p. 157) in which the interests of the individual and society are reconciled. Rawls, like Hegel, investigates what would realistically be required qua moral and institutional principles for a just society, and claims that such a society could be either a type of capitalism or a type of socialism. However, Sensat argues that Rawls’s case fails, inasmuch his system of justice is incompatible with the social effects of commercial commodity production; it cannot eliminate estrangement, and that gets in the way of justice too. Nevertheless, Rawls’s ideas might well be ‘a basis for democratic social unity ‘ that is ‘relatively free of estrangement’ (p. 186-187).

Ten obvious criticisms could be made of Sensat’s book.

(1) He assumes knowledge of the significant literature on alienation, estrangement and anomie (there are ‘many theorists’ – p. 3), but he does not explicitly engage with (or cite) most of it.

(2) He does not analyze the forms, varieties, gradations and modalities of estrangement in any depth, even although they could have different causes and consequences.

(3) While aiming for a ‘scientific’ account of estrangement (p. 9), he disregards a hundred years of experiments to overcome estrangement with new social and economic relations.

(4) It is not self-evident that the antithesis of estrangement is ‘freedom’ (however defined). One can be free (and/or morally sound) and be estranged.

(7) He does not explicate convincingly the origin of value (the central concept in ethics and economics), as well as the connections of moral value and economic value. In particular, product-values are not simply a ‘social projection’ (p. 129), since it takes real work and resources to make the products, as a physical necessity. If people do not value their products, they don’t survive.

(8) Marx’s argument about estrangement is not simply about exploitation and labour alienation, but about the interactions between voluntary (self-willed) and involuntary (unwilled) cooperation and competition in bourgeois society.

(9) Sensat’s model of rationality as ‘deliberative control’ omits the effect of purely irrational factors, and begs the question of why this concept of rationality is the most viable one, given that there are different interpretations of what rationality (and irrationality) actually is.

(10)Since he disregards the potentials of non-estranged relations that already exist in society, he lacks any specific idea of how the ‘transformation’ to a non-estranged society could come about.

Thus, while specialist readers will be impressed by Sensat’s breadth of vision in a sharp piece of philosophical reasoning, they may also feel somewhat frustrated and dissatisfied. Concisely traversing the summits of Enlightenment philosophy, Sensat often becomes too sketchy, and often does not pursue arguments in sufficient detail, considering objections to his case. There is much to be learnt from this provocative book. It also calls for a substantive, longer response.