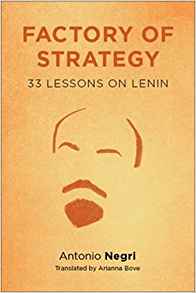 Factory of Strategy: Thirty-Three Lessons on Lenin is the English translation of Antonio Negri’s La fabbrica della strategia. 33 lezioni su Lenin from 1976. Some forty years ago, Negri set out to answer the question: ‘[d]oes Lenin still mean anything to us’? (4) He responded by providing an original reinterpretation of the essence of Leninism, followed by the argument that in spite of the horrors that followed from the Soviet experiment and despite the drastic changes in the world political-economy between 1917 and 1976, Leninism indeed still had much to teach the communist movement. Negri’s innovation, along with that of several other Italian Marxists of the mid-20th century, would be to show the viability of a Leninism interpreted in light of the Marxist ‘theory of the subject’ of the day (xviii). In the Preface to the English translation from 2014, Negri insists that these lessons have not lost their urgency in the present political climate (xvi). The movements led by ‘the militants of Occupy, … the Indignados of Spain, Greece, and Europe, and … the young people … in the “Arab Spring,”’ (to whom Negri dedicates this translation) have been suppressed, but they ‘have opened a new cycle of anticapitalist struggles for the emancipation of labor, social equality, and common freedom’ (xi, xv). The success of such movements in the future, Negri argues, requires a theoretical apparatus through which they can be studied and universalized; that apparatus, he maintains, is Leninism.

Factory of Strategy is divided into five parts: 1) ‘Lenin and Our Generation’, 2) ‘Lenin and the Soviets in the Russian Revolution and Some Remarks on Sovietism’, 3) ‘Interregnum on the Dialectic: The Notebooks of 1914–1916’, 4) ‘The Economic Foundations of the Withering-Away of the State: Introduction to the Reading of The State and Revolution’ and 5) ‘Appendix on “Left-Wing” Communism’.

Of what, then, does Negri’s re-interpretation of Leninism consist? His definition of Leninism can best be summed up as follows: ‘Leninism does not exist’ (6). By this, he means that Leninism has often been mistaken for being a kind of ‘formalism’, or ‘a list of precepts’ or ‘key to the solution to any problem’ (96), when what Marx and Engels said of their own thought can equally be said of Lenin’s: ‘“[o]ur theory is not a dogma, but a guide to action”’ (92; Lenin 1970, 68). Negri supports this thesis, by showing that one of the, what is often considered to be, most salient features of Leninism – i.e., the organization of the working class by professional revolutionaries – was only ever a necessary condition, not a sufficient condition, for fostering revolutionary working-class movements (97). He draws the reader’s attention to Lenin’s One Step Forward, Two Steps Back, in which Lenin does not treat organization by the revolutionary party as foundational, but rather argues that ‘questions of organisation … are … less fundamental than questions of tactics, let alone of programme’ (33; Lenin 1965, 404). The necessary condition of the Leninist guide to action is, thus, not the group of professional revolutionaries, but, what György Lukács calls, the ‘actuality of the revolution’; the preparation at every moment for the eventual seizure of power by the working class, from which the building of a communist society can begin (7, 70; Lukács 1924, 1).

The Leninist strategy for carrying out this aim is dialectics, which Negri states, Lenin transforms into a ‘weapon of the revolutionary subject’ (180). Leninist dialectics in its mature form can be found in the ‘Conspectus on Hegel’s Science of Logic’ from the Philosophical Notebooks. What separates it from its Hegelian and Marxian counterparts is how it addresses the nature of the Absolute subject. Of course, Lenin, like Marx, argues that Hegel mistakenly attributes the highest standpoint of any moment in history to Spirit, when it, in fact, belongs to the working-class subject. For Lenin, again as for Marx, this means that history does not develop through conflicts between theses, but through conflicts between classes (163). Lenin goes beyond Marx, however, by maintaining that the tension between continuity, or ‘essence and of connection’, and discontinuity, or of ‘movement and production’ in dialectics is not only reconciled through the re-imagination of the identity of the Absolute (173, 177). The sublimation of these two moments can only be realized in the continuity of a discontinuous subject; that is, through the praxis of a revolutionary subject. Thus, Leninist strategy is characterized by the analysis and interpretation of ‘the real continuity of a subject that puts forward subversive practices as the essence of its continuity,’ and from this analysis and interpretation, the determination of strategic shifts, the spontaneity of which are meant to confuse and disorient opponents, fostering more favorable conditions for carrying out the eventual revolution (6, 7, 29–30, 91).

Beyond the ‘actuality of the revolution’ and dialectics, Negri argues that Leninism remains relevant in positing the ‘economic withering-away of the state’ as a necessary condition for bringing about a communist society (xii–xiii). In The State and Revolution, Lenin recovers the Marxist definition of the state as ‘the product and the manifestation of the irreconcilability of class antagonisms,’ using it to argue that a classless society can only be brought about through the ‘withering-away’ of the state apparatus (203; Lenin 1964, 7). Withering-away, for Lenin, is not a spontaneous process, but the result of the seizure of and conscious effort to destroy the state by the proletariat. In this respect, Lenin also recovers Marx’s argument for the ‘economic’ basis of the withering-away of the state; that is, the notion that the state will not cease to exist through the procurement of an equal wage for all (Lasalle’s position), but through the elimination of the wage altogether (243). Negri criticizes Lenin, however, for ‘insist[ing] on the simplicity and easiness of the shift’ (he cites passages such as the following: ‘the expression “the state withers away” is very well-chosen, for it indicates both the gradual and the spontaneous nature of the process’) (237; ibid., 106). The truly Leninist position on the economic withering-away of the state, he argues, would be the ‘intensification of the struggle between classes’ after the seizure of power (237). Such intensification has been enacted in two ways: the Stalinist (characterized by ‘state dictatorship’) and the Maoist (characterized by ‘the liberation of the mass power against the state’) (261).

Nevertheless, Negri maintains that ‘we are a planet away from Lenin’s issues’ (11). Today, ‘capital covers the whole of society [meaning] there are no longer any forms of production or cooperation that are external to capitalist domination’ (43). The nature of the working-class has changed, the terms of private/public ownership of the means of production have changed, the relation between intellectual and physical labor have changed, etc.; in other words, many of the shifts that that dictated Leninist strategy have already taken place. Capitalism, nevertheless, persists for Negri, as the wage system remains intact (11, 42, 258). For this reason, the essential elements of Leninism indicated above remain relevant; they need only be carried out with new intermediate strategies in mind: 1) the phase between capitalism and communism is no longer necessary (257), 2) the seizure of the means of production must be accompanied by dismantling machines that are not conducive to the culture of a communist society (260, 271) and 3) once seizing state power, class struggle must be intensified (236–7) and 4) this intensification must be carried out not through state dictatorship (the Stalinist solution), but through the liberation of mass power against the state (the Maoist solution) (260–1).

I recommend Factory of Strategy to scholars of Lenin, of Marx, and of Negri as well as to leftist activists, though with some reservation. In this book, Negri does provide an excellent reinterpretation of the essence of Leninism. It is as novel as it is expedient, playing as an ambitious attempt to find, within Leninism, a common ground with the so-called communist ‘left-wing’ (given the only intermittent necessity of the revolutionary party). Alongside this reinterpretation (lessons 1–4, 9), his account of Leninist dialectics (lessons 16–18) and his account of the economic withering-away of the state (lessons 24–26) are, without question, indispensable studies and they have not at all dated. However, time and again throughout the text, Negri falls into a kind of post hoc ergo propter hoc fallacy; measuring the successes and failures of communist movements against the degree to which they were obedient to Leninism. This position is considerably undercut by Negri’s rather selective use of historical examples; it is never clear to what extent Lenin’s own missteps, intra-Bolshevik disputes, the Cheka, the Red Terror, War Communism, the National Economic Policy (N.E.P.) (issues on which Negri is almost entirely silent) are extensions of Leninism or of its perversion. This, along with some distracting organizational issues (i.e., Negri references a prior, discussion of Materialism and Empirio-Criticism that appears to be absent in the text) stand in the way of the text being a major manifesto or major historical treatise (173).

The question of whether Leninism is indeed the theoretical apparatus of the revolution of the future lies beyond the scope of this review. But as we near the 100th anniversary of the October Revolution of 1917, one cannot help but feel an uncanny sense of déjà vu (i.e., the alliance of capital and the state, the egregious wealth inequality, etc.). In reviving the study of the instrument that, for better and for worse, posed the greatest threat to the capitalist system to date, Negri provides us with, perhaps, one more valuable lesson: that the antinomies of Leninism remain those of the radical left today and that if we are not to repeat the tragedies of the 20th century, only in a first step back is there a way forward.