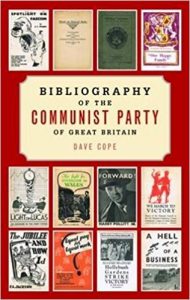 Dave Cope
Bibliography of the Communist Party of Great Britain

Chris Waugh is a Doctoral Researcher at the Centre for Interdisciplinary Gender Studies, School of …

Towards the end of his life, Michel Foucault posited a theory of counter-history. The idea of counter history conflicts with official history: counter history is the history of defeats, but within those defeats there is the possibility to bring resistances and subversions to the fore (Foucault 2003, 65-87). These “subjugated knowledges” (Foucault 1979) become an epistemic insurrection against official history, and a way to resist hegemonic power/knowledge discourses.

For scholars of leftism, and left activists, this counter-history is that of the party, the movement, the cooperative. More often than not, this history is subaltern, and passed onto us by old Comrades in half formed memories of past struggles, a history documented through our own engagements with activism. Political histories of political parties, particularly those of the far left, tend to focus on the often miniscule electoral successes of these parties, and say little else on the subject. Anyone who has been involved in the left will accept instantly that this is a keyhole view of a much broader picture. In this sense, Dave Cope’s extremely thorough text stands out from being simply a list of references. Bibliography of the Communist Party of Great Britain offers considerable resources for historians and researchers of the left, but also, importantly, illustrates and explores the party as culture and milieu, as much as political force.

Cope’s introductory essay situates the Communist Party of Great Britain (CPGB) as “a strange creature,” (7) which abandoned Stalinism early, and towards the end of its days advocated for a form of libertarian socialism. Yet what set the Communist Party apart from other groups on the left (with the exception, perhaps, of the International Socialist/Socialist Workers Party) was its attraction to some of the country’s finest intellectuals, artists and writers, as well as a broad grassroots activist base from all social settings. In this sense, Cope argues, the Communist Party of Great Britain can be considered as a cultural hub of sorts, the political home, either briefly or permanently, of such intellectual figures as Doris Lessing, Eric Hobsbawm, Raymond Williams, and Sylvia Pankhurst.

Further to this, the extremely in depth bibliography illustrates Cope’s claim that within the CPGB “the belief in the written word was boundless.” Divided by format and, indeed in many cases, by branch, the reader finds scrupulous records of texts produced by the party, ranging from education pamphlets to localised propaganda and a thorough list of CPGB newspaper articles, reviews, organisational and theoretical journals. Such texts provide insight – by their very existence – into perhaps unacknowledged aspects of the CPGB’s milieu. For example, the CPGB devoted time and considerable writing to women’s politics and gay and lesbian politics, as noted by significant numbers of entries on these topics in this volume. This is worthy of note as the publication of such materials came at a time when orthodox Communist Parties were, broadly, hostile towards the women’s and LGBT movements (the PCF, French Communist Party, for example, maintained until well into the 1970s that feminism and gay rights were part of the “rubbish of capitalism.”) Indeed, the cultural focus of the CPGB’s publications is evident from the number of entries relating to literature and music. Such breadth of cultural criticism, and political analysis of cultural phenomena, was apparently unrivaled in the political left, including within the Independent Labour Party (ILP).

Beyond the attraction of the CPGB to major figures in English culture, this book also highlights the work of lesser known “worker-writers.” The CPGB ran poetry magazines, writers groups, and served as inspiration for folk and avant-garde musicians. A merit of this volume is the positioning of the works and publications of literary greats together with those of lesser known authors.

This review has focussed thus far on the exploration of the CPGB as a cultural, as well as political, arena. This is not without reason. A criticism of social movement studies as a discipline – advanced in particular by those of us in the field who consider ourselves to be activist-scholars – is that existing scholarship has failed to grasp the distinct milieu within movements. Academic research has said much on the subject of mobilising strategies, framing techniques and the like, but has been comparatively silent on the way in which participation in a movement comes with its own literature, poetry, music, conceptions of love and comradeship and so on. As noted previously, this is perhaps the result of the lack of published resources on movement culture and history. In this sense, The Bibliography of the Communist Party of Great Britain is a welcome intervention, presenting an exhaustive glimpse into that hidden culture.

This, of course, brings us to the question of the relative merit of this volume as a research tool. Cope’s work is incredibly thorough and scrupulous, furthered by the listing of work not only by the CPGB, but also of work about the party. There are some amusing finds in this latter section, Modern readers might find themselves amused to discovered the publication and circulation of a 1950s fifty-one page pamphlet on the “Menace of Communism” authored by the Girl Guides Association – a snapshot, perhaps, of the often forgotten existential fear of Communist influences. It is, additionally, commendable that Cope clearly foregrounds his commitment to expanding and updating the bibliography, and issuing annual printed copies. Given its distinctiveness, and depth, I can highly recommend the Bibliography of the Communist Party of Great Britain to left historians and social movement scholars, and hope that its publication will lead to further explorations of left history and culture.