Marx & Philosophy Review of BooksReviews‘Reason after Its Eclipse: On Late Critical Theory’ reviewed by Kevin Gray 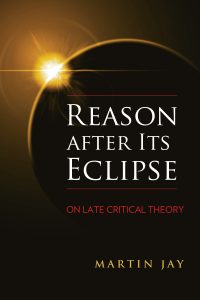 Martin Jay
Reason after Its Eclipse: On Late Critical Theory

Kevin W. Gray is Assistant Professor of Philosophy at the American University of Sharjah (kgray@aus. …

Martin Jay’s most recent discussion of the intellectual history of the Frankfurt School concerns itself with a recurring question: what is the nature of reason and how does it relate to Critical Theory’s critique of late capitalist society? Jay begins the book with an anecdote of an early conversation that Jay had, as a graduate student, with Friedrich Pollock – an important figure in the history of the first generation of the Frankfurt School (ix). He asked Pollock: if the dominance of instrumental reason is to be viewed as a pathological development in modern society, what is to be put in its place? An exasperated Pollock replied that Max Horkheimer had devoted a full book to attempting to answer this question, his 1947 book Eclipse of Reason. In that work, Horkheimer argued that the separation of reason from its underlying metaphysical assumptions ultimately served to reduce reason to an impoverished instrumental tool useful only for manipulating the world.

Ultimately, Jay finds Horkheimer’s response unsatisfying (he never gives us a clear explanation why, however; the most the reader can deduce is that he accepts much of Habermas’s critique of the work of the first generation of the Frankfurt School). To that end, he attempts to reconstruct the engagement of the Frankfurt School with the idea of reason and rationality as it has developed in Western philosophy. Although he rejects Horkheimer’s answer, his book not only draws it name, but also its organisation, from Horkheimer’s book. Just as Horkheimer begins his account of the transmutation of reason with the work of Plato, so too does Jay. Jay argues that, contrary to contemporary histories, philosophy has historically had great difficult separating mythos from logos (3). To that end, he devotes the first half of his book to investigating the repressed critical potential of reason in the history of philosophy, beginning with the Pre-Socratics and ending with the Hegelian critique of Kantianism. Jay argues in favour of Martin Heidegger’s contention that the history of philosophy is the historical reduction of logos to reason. This argument, as he shows, gained great traction in Critical Theory. For all their criticism of Heidegger’s metaphysical obscurantism and his detestable politics, members of the Frankfurt School (and not just Herbert Marcuse) were happy to accept his diagnosis of the tragic reduction of reason to technical or instrumental rationality (13).

In developing his theory of the relationship between critique and reason, Jay argues that it is in Horkheimer and Adorno’s engagement with the Kantian philosophical critique of the rationalists and the empiricists that we find the first traces of the Frankfurt School understanding of critique. Kant’s attempt to salvage reason from Hume’s savaging of rationality would inspire the more immediate Hegelian ancestors of the Frankfurt School to attempt to salvage reason as a progressive force. Even if they would ultimately find such theorising unconvincing, many would turn to the work of Friedrich Hegel to restore reason to its rightful place as chief organiser of systematic philosophy (60). But the work of Hegel, as Jay argues in the closing pages of the first section of the book, would prove insufficient for a critique of the material conditions of society, as Hegel’s leftist critics would soon show.

The first half of the book is substantially weaker than the second, and against the views of other reviewers, I would argue that the rather picaresque history of philosophy it presents is far too brief for the terrain that it covers. The second half of the book, however, compensates for the weakness of the first, presenting a concise (roughly 70 page) description of the development of the Frankfurt School’s philosophical project. In the fifth chapter, Jay presents the early critique of reason in the work of (what has come to be known as) the first generation of the Frankfurt School. Although in his earliest writing, Horkheimer, who plays a substantial role in Jay’s account, had embraced the emancipatory function of reason against what he saw as the irrationality of fascism (97), by the time he wrote Eclipse of Reason, he had come to identify the development of modernity as concomitant with the emergence of instrumental reason and the end of emancipatory reason itself. Meanwhile Marcuse continued to argue for a Hegelian conception of reason against what Marx had identified as the defective, instrumental concept of reason embedded in commodity fetishism, the domination of exchange value, and reification (98).

What substitutes do the first generation of the Frankfurt School offer? Horkheimer suggests, against the subjectivist and functionalist accounts of reason, that reason might function, in good materialist fashion, objectively, by which he means “a force not only in the individual mind but also in the objective world – in relations among human beings and between social classes, in social institutions, and in nature and its manifestations” (100-101). Theodor Adorno suggested that art can retrieve what has been lost by the rationalisation of reason and the confinement of sensory experience to external. Marcuse would find it in eros, which Horkheimer would identify, unsatisfactorily, with objective reason (101).

Subsequent members of the Frankfurt school, most notably Jürgen Habermas, rejected these solutions. Habermas, for instance, remarked that Horkheimer’s praise of the dark pessimism of bourgeois writers continued to irritate him long after he had read Horkheimer’s writing on the subject (105). Habermas “felt compelled to seek a radically new foundation …. for noninstrumental rationality, in the hope of salvaging the critical energies of the Enlightenment tradition” (114). Against the first generation of the Frankfurt school, as Jay shows, Habermas argued that instrumental reason is merely one type of a broader rationality in modern society. “Reducing all science and technology to its positivist caricature,” as Habermas will accuse his teachers of doing, ignores the legitimation potential contained in the differentiation of values spheres identified by Weber (121).

Habermas’s early work, which anticipates Marcuse’s argument in One Dimensional Man (developed two years later), focuses on the evolution of the contemporary public sphere Like Marcuse, Habermas argues that the public sphere became refeudalised during the 19th and 20th centuries. Against Marcuse, however, in his early work and in his subsequent writing, he argues that the public sphere provides, at least in its ideal form, the first glimpses of potential bases for the communicative legitimation of the actions of government (117). Habermas’s development of this communicative potential, Jay argues, moves the subjective centred-account of reason, so heavily criticised by all members of the Frankfurt School, to the intersubjective account of reasons, resting on the validity of consensus achieved through the communicative competence latent in late capitalist society (124-5).

In the final chapter, arguably the strongest in the book, Jay traces the work of Habermas’s critics, and shows how Habermas himself responds to their criticisms of his theory of communicative reason. Loosely speaking, Habermas’ critics fall into two ends of a spectrum with Habermas occupying the middle. On one end of the spectrum, there are those who decry any attempt to mount a defence of rationality as a dangerously misguided attempt at universalism. On the other end of the spectrum are those who are unapologetic defenders of the Enlightenment project, for whom immanent critique and the power of quasi-transcendental interests will never be enough (145). Jay traces how debates around the nature of reasons and the conditions which render them acceptable have evolved in and surrounding Habermas’ writing. To take one example: on one reading of Habermas’ early work, any reason which could achieve consensus would count as true for the purposes of communicative action (157). However, in his later work, Habermas abandons the anti-realism of this position (often associated with thinkers like Rorty), arguing that it was incompatible with Frankfurt School concerns about the nature of systematically distorted communication (156). In this respect, one of Jay’s chief accomplishments is to frame the way in which Habermas’ theory of communicative action has evolved in dialogue with his critics. In the final chapter, Jay does an admirable job fleshing out debates around the nature of communication and rationality in contemporary critical theory.

As Jay’s book is substantially an intellectual history, it would be wrong to judge it on the originality of its philosophical argument. Instead, the test is how well the author is able to reconstruct the history of a specific debate in German philosophy. And while I have expressed reservations about the earlier chapters – most notably its cursory history of pre-Kantian philosophy – what Jay has done, admirably, in the final three chapters, is provide a subtle and nuanced introduction to debates surrounding the evolution and nature of reason in contemporary Critical Theory. Those sections are worth reading for students seeking an introduction to the work of the Frankfurt School, and for established scholars interested in a concise history of its research program.