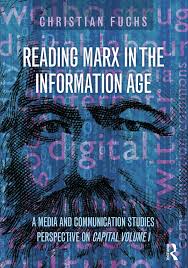 Fuchs, in writing his ambitious book Reading Marx In the Information Age, takes on two primary tasks. The first is an explanation of Marxist thought that focusses on Capital, though Fuchs’ book is conscious of other writings by both Marx himself and by others in the Marxist tradition. This, in and of itself, would be a worthwhile goal for a book aimed at the education of undergraduates. To this end, Fuchs’ explanations are clear and thoughtful, without the sometimes-heavy jargon of Marx himself. In many ways, the book contains a condensation and clarification of Marxist thinking which reads like an erudite lecture, clarifying lists and tables included. There is, additionally, a second goal to the book. As the title indicates, Fuchs finds that Marx – due largely to the fact that he did not live to see the contemporary period – does not adequately address the ways in which information technology affects, and is affected by, the relations of production. Addressing this gap in the Marxist literature would be more than an adequate task for lengthy treatment. Fuchs makes the case that, indeed, a Marxist framework can help us understand our relationship with technology slightly better. As is characteristic of his writing style, the author accomplishes this with clarity and precision of language without unnecessarily burdening the reader with jargon.

The volume is divided into eight substantive chapters, which cover the main bases of Marxist thinking: exchange, capital, wage labour, surplus value, and wage labour. Each of the chapters covers a more specific subtopic. Overall, the structure of the work is to be commended. The chapters themselves are short and digestible. While there are two primary goals of the work, the book itself is not divided between them. Rather than, for instance, splitting the book into two volumes, the first as a companion to Capital and the second as Fuchs’ more novel take on applying Marxist thinking to the contemporary moment, each chapter contains elements of both. There is little to criticise in the explanatory and definitional sections of the book: Fuchs’ writing is clear, concise, and accessible to both neophyte scholars and those more familiar with Marxism who may look to the book as a teaching resource or handy refresher of the basics. With that said, the work is not a simple transcription of thorough lecture notes and does make its own contributions to the field, which is an interesting second pillar to the work. Each chapter starts with a section dedicated mostly to Classical Marxist definitions. This is done with clarity and style and, thus, the book is an unqualified success in this regard. For those looking for more than a mere summary of Capital, itself a blessing which would save scholars the days of melancholy induced by digging around in the original work, Fuchs has more to offer.

The novel element of Reading Marx in the Information Age is, as the title would indicate, the elements concerning the contemporary moment in its technological saturation. The latter parts of each subsection grapple with this project. For instance, the first chapter, having explained the commodity in terms of exchange and use value, begins to introduce the reader to the particular problems of information and intellectual property, specifically their lack of apparent use value in the culture industry as well as their relative cheapness of reproduction when compared to physical goods. The work cites a wide-ranging literature, which can be found in the extensive bibliography, which will be of major use to those interested in more reading or embarking on a major research project. With that said, it would have been tempting for Fuchs to simply summarise Marxist thinkers who consider information and technology: it is, however, likely that this would have overwhelmed readers who were expecting an updated summary of Capital. Fuchs avoids this particular Scylla; the sections concerning information technology in particular maintain the jargon which has been previously explained in the work without falling into the Charybdis of oversimplification. In simple terms, the work gives those familiar with Marxism a clear resource and a serious review of the relevant literature on information technologies without talking over the heads of those who need more guidance through the classical Marxist canon.

Several features of the book make it especially useful, even beyond the substantive text. As a matter of course, reader’s guides recommend specific editions of the texts through which they guide the reader: this enables the author to make specific page references without cumbersome and overly verbose steering to sections that may appear in different order in the varying translations. In this case, the Penguin edition of Capital is recommended, which was a sensible decision as it is inexpensive and widely available; cost must be a consideration when recommending companion books, given that, practically speaking, the author is asking the reader to acquire two books. Each chapter also has a section following the substantive text which contains two primary elements. The first is a list of terms introduced in the chapter to remind the reader and to give a handy reference point. Second, and more appealing to instructors than to students, is a list of discussion questions. Most of these questions would be more than appropriate for essay topics in undergraduate courses and, thus, could serve as a source of inspiration for instructors seeking to hone down a reasonable essay topic that is both reflective of reading and requires some thinking on the part of the students. In a similar vein, a student preparing for an exam on Marxism would find the questions to be great practice. While these features are not, in and of themselves, particularly novel, they do make the book a richer experience than mere text and serve, ultimately, to give readers, whether students or instructors, the opportunity to do a little more with the work.

While the entire book is well thought, clearly written, and not overly-laden with intrusive jargon, there are a few sections that deserve special praise. The description of wage labour and its alienating qualities, which forms part of chapter six, is exceptionally clear, which is a major boon to students of Marxist thought. Following in this vein, chapter fourteen contains a relatively novel development, the distribution of digital labour, which shows as an example the kind of work Fuchs claims he is developing: an update of classical Marxist political economic theory which applies to the contemporary moment. There are several such moments in the book, but the two I mention here are especially praiseworthy.

Overall, Reading Marx in the Information Age does largely as it claims: it is a thoughtful and well executed guide to thinking in Capital, Marx’s original work, as well as an introduction to Marxist scholarship more broadly. Additionally, the lessons in the Marxist canon are accompanied by insightful commentary on how versions of the original ideas may be applied fruitfully to the contemporary moment. With that said, the book has but one flaw I find worth mentioning, and it is a quibble: it lacks engagement with the poststructuralist thinkers such as Deleuze that could add to the discourse on the role of technology. Considering the broader scholarship, Fuchs’ book would be a sensible addition to several libraries. The first would be to the syllabus of an undergraduate course on modern political theory as a supplemental reading: the book would provide students with additional explanations and definitions beyond and more readily available than those offered in a typical lecture format. Second, a graduate course on modern or contemporary political thought would greatly benefit from the addition of this book; the discussions on labour in the digital age ache for more discussion and thinking on the part of the upcoming generation of scholars. Finally, scholars interested in the intersection of Marxist thinking and the digital world would find Fuchs’ discussions and bibliography to be a significant boon. The book is wholly well done and an excellent addition to the contemporary scholarship which seeks to make clear the relevance of Marx to the world in which we live, think, and act.