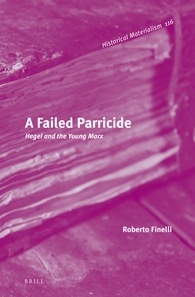 Roberto Finelli
A Failed Parricide: Hegel and the Young Marx

A Failed Parricide by Finelli is an ambitious text, which, as suggested by the subtitle, tries to reconstruct the relationship between the young Marx and Hegel. The book was first published in Italy in 2004. It has recently been released in English translation.

Through a refined analysis of Marx’s early writings, Finelli states that Marx did not overcome the Hegelian theoretical framework until around 1848 (a turning point for Europe), and that even after this date his opposition to Hegel was superficial. Marx would not return to Hegelian philosophy until later, when a set of biographical contingencies forced him into ‘a period of profound meditation and study’ (251). This time around, Marx was equipped with much greater theoretical knowledge, and was able to complete the “parricide” of Hegel with his final draft of the Capital.

Finelli approaches this troubled Marx-Hegel relationship with the conviction that it is necessary to abandon two complementary and extremely partial visions: 1) Marx’s dependence on Hegel as something without end and 2) Marx’s representation of himself as the greatest critic of idealism, responsible for its final defeat. By way of psychoanalysis, the author shows that Marx fell into serious misconceptions by believing he had resolved the decisive fallacy of Hegel’s philosophy: namely, the reduction of the real to the Idea. The thesis of the book is that Marx summarily dismissed Hegel’s philosophy, rather than devising a rational mediation capable of correcting the Hegelian approach, and that Marx, from a theoretical point of view, thus remained substantially behind Hegel. The glaring contradictions in the philosophy of the young Marx, in fact, can be read as an attempt to get rid of the Hegel’s lumbering system as soon as possible. Employing a psychoanalytic vocabulary, Finelli says that Marx waged a real ‘repression’ against Hegel, that is, a compulsive and forced denial of his theoretical father. The author adds that only in his maturity was Marx able to fully enter “mourning”, and to separate himself from Hegel.

Finelli reconstructs the philosophical evolution of the young Marx as a kind of personal journey, very much like the Phenomenology of Spirit, starting from the letters that he wrote to his father. This path is summarized as follows:

1) Marx, as a student, initially uncritically immersed himself in the Hegelian perspective.

2) Young Marx’s approaches the most radical circles in Berlin, where the philosophy of Hegel is perceived as alien and hostile. Being in a specular opposition, however, Marx does not address the problem of a real overcoming of Hegel.

3) Marx returns to Hegelian philosophy in his later writings. It is here that the overcoming of Hegel occurs. Marx conceives of a broader and more concrete Universal: the world of political economy. Marx thus exceeds Hegel, while at the same time as he represents the highest peak of the Hegelian philosophical program, namely that of the mediation between subject and object through Thought.

A Failed Parricide focuses on the second point of this reconstruction, beginning with an analysis of Marx’s Dissertation at the University of Jena. Here, Finelli argues, the philosophies of Democritus and Epicurus represent a sort of pretext for Marx speaking of his philosophical present: it is a ‘method that Marx adopted for the rest of his Life’ (15). From Marx’s point of view, greek atomism was a post-systematical philosophy that spread after the great era of Plato and Aristotle, in the same way that other philosophies (different from the Hegelian one) began to spread in Germany in the mid-1800s (20). Just as Epicurus’ clinamen introduced the freedom of human action, the Young Hegelians tried to force philosophy into a “practical” dimension, namely that of praxis. Marx came into contact with these Young Hegelians after moving to Berlin. They were motivated by the need to overcome Hegelian philosophy, which they saw as the greatest obstacle to the birth of a freer society.

Hegel’s thought, according to Finelli, suffered from an unfair criticism in this period. On the one hand, it is true that Hegel’s role as rector in Berlin made him the most representative philosopher of the Prussian State. On the other hand, Hegel was still the most dedicated thinker when it came to understanding the complexity of his time, something he did in the most comprehensive and articulate manner. In this general cultural climate and, above all, with Feuerbach’s influence, the young Marx waged a theoretical battle against his old master. According to Finelli, this is not a battle he would ever really win.

To the strictly dualistic vision of Hegel, Marx counterposes a human vision that Finelli does not hesitate to define as simplistic, and, ultimately, inferior to the theoretical level reached by Hegel’s philosophy. Marx opposed Hegel through a regression to “deceptive materialism” (136) that was inspired by a deeply idealistic principle. The secret idealism of Marx, according to Finelli, is based upon the identification of the absolute subject with the ‘collective and anti-individualistic principle of the ‘human species’’ (menschliche Gattung) (113). This concept is, ultimately, poor in historical and theoretical depth; hence, the young Marx’s conception of subjectivity is reduced to the abstract and immediate equality of mankind, while Hegel’s greatest lesson was precisely his vision of subjectivity as the process of becoming oneself through the relationship with otherness (werden zu sich).

It is clear that Marx learned Feuerbach’s “great lesson”, namely the logic of the subject-predicate inversion, as it is through this interpretive scheme that Marx reduces Hegelian philosophy to a ‘mere speculative theology [which] anticipates and presupposes the Idea over reality’ (206). Along with this theoretical acquisition, Marx remained entangled in the framework of Feuerbach’s well-disguised idealism centered around the ‘celebration of the poetic and promethean prevailing of humanity over nature’ (76).

This leads to a much less sophisticated anthropology than that of Hegel, and thus to a rather mechanistic and naive philosophy of history based on belief in the infinite, bettering progress of mankind. As Finelli writes, ‘Marx’s early anthropology, it seems to me, has a symbiotic-fusional, organicistic and spiritualist nature, despite its claim of materialism and concreteness’ (XI). It was only after moving to France that Marx managed to overcome Hegel and move from a radical democratic thought to communism (issues that are addressed by Finelli in a second book, currently available only in Italian).

Finelli concludes by tracing the mature philosophical journey of Marx in the writings On the Jewish Question and the Critique of Hegel’s Philosophy of Right, both published in the German-French Annals. He sees Marx’s thought as coming to a full development during the drafting of the Capital. The central issues to this process were, according to Finelli, ‘The paradigm of human praxis as nothing other than labor’ (75) and the mature development of the ‘formal determination category’, which he identifies as the real keystone of Marx’s whole philosophy.

One could wonder how this widely debated and analyzed period of philosophical history remains relevant to the current day. The answer can be found in Finelli’s Preface, where he shows how old debates can be read while maintaining an eye on the present.The book begins with a seemingly out of context question: ‘How does hegemony fail? How was the force of consent that the values and the culture of the Italian Left had conquered since 1968 and throughout the 1970s extinguished, by a capillary diffusion, radically changing the common sense of the country?’ (vii). This question could be confusing to the English reader, especially as Finelli continues to reflect on the Italian Communist Party and its progressive decline for some pages.

The Italian Communist Party was one of the strongest communist parties in Europe. It was defeated, according to Finelli, because it was never able to sufficiently understand the protests of ’68. In other words, the Italian Communist Party (PCI) failed to absorb ‘those parts of European culture which, at least since Kierkegaard and Nietzsche, through to Sartre’s existentialism and the Frankfurt School, had claimed the values of the uniqueness of each single individuality, of the profound interiority of each self and the liberation of body and desire’ (vii). Therefore, the PCI, ‘which was based almost absolutely and univocally on the values of egalitarianism and communitarianism’ (ix), failed to understand the issues of sexual liberation, emancipation of women and, more generally, that of anti-authoritarianism. This fact led to the progressive decline of the party and of communist hegemony, both in Italy and in many other European countries. Instead of recognizing this “new communist humanism” represented by the movement of ’68 as something legitimate, the PCI simply rejected it. The party theoretically based itself in a poor anthropology, and this is an idea Finelli explores in his conceptualization of the young Marx. He writes, ‘Marxism’s founding anthropology had a very idealistic and reductive vision of the human being, and its limitations affected the entire theoretical and practical history of communist tradition’ (xiii).

However, one possible weak point in Finelli’s argument arises when he says that ‘the history of those years […] ended in failure’ (viii), while seeming to disregard how this “waste” actually came from both sides. While it is true that the Italian Communist Party—and the other Communist parties in Europe—were not open enough to the new circumstances of ’68, it is also true that the youth protest movements did not want to make any compromise with the world of their “fathers”. With this in mind, one could say that the spirit of ’68 faltered because it completely rejected the world of parties and unions. As Finelli writes, ‘we know, as Hegel taught, that turning into the opposite of oneself is the most explicit expression of the stubbornness of a subject who, in order to reaffirm their inalterable identity as a subject of power, passes on from one form to another, never letting the real other penetrate into itself’ (x).

From a more general point of view, Finelli thinks it is necessary to reflect on Marxism’s ‘major and fundamental anthropological and juridico-political weaknesses’ (xiv) in order to understand the tragic aporias of communism in the twentieth century. One possible criticism of this edition is the absence of an editor’s note, which could have helped the reader to contextualize this reflection as developed by Finelli. As is, English readers lack even the minimum coordinates for understanding the debate around the Italian Communist Party and the movements of ‘68. Finelli’s argument here is impressive, but it risks being lost on non-Italian readers.

That being said, A Failed Parricide is an essential book for those who study Marx’s thought as a whole. It is also valuable for anyone who want to explore this moment of crucial change in the history of philosophy, a moment that continues to exercise its charm on today’s readers.