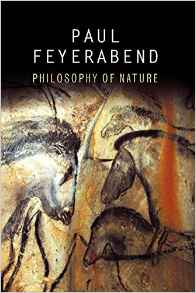 Paul Feyerabend writing about the “philosophy of nature” as his code-word for worldviews and myth, is a puzzle. In his early career he was a hard-core philosopher of science. In his mid-career, though still noted as a hard-core philosopher of science, he rocked the boat with his arguments against methodology and for the incommensurability of different scientific theoretical systems. Even if you did not know this about Feyerabend you could find out in the appendix where the editors include Feyerabend’s 1977 request for a sabbatical year that integrates his work in the philosophy of science with a project to explore and write about myth and the origins of philosophy and science in myth. The last document of a few pages in the appendix is a report dated 3/18/85 on Feyerabend’s 1980 sabbatical. However, Feyerabend had already completed the manuscript for the book on the “philosophy of nature” or worldviews and myth, for which he requested funding and a sabbatical year. In the early 1970s during the same time period that he had written the iconoclastic Against Method (1975), Feyerabend had also written his manuscript on myth. It is interesting that the manuscript for the book on myth was only recently rediscovered by Eric Oberheim and Torbjorn Gunderson in August 2004 (vide x). For some reason, Feyerabend buried it even though it was commissioned (by Vieweg, Braunschweig) as part of a 5-6 volume study. (229) Why does it deserve exhumation? Are there other than purely scholarly, historical reasons for publishing the manuscript? Does the book have any interest to current questions in philosophy about science and myth? Does the book have any interest to current questions about the role of science in society?

Even if the book only sheds more light on Feyerabend’s intellectual development, it still can be of interest to those caught in the currents of the immediate present. From my point of view, I am reading the book as a current study of alternative worldviews that attempts to demonstrate historically Feyerabend’s methodological principle of proliferation explained in the editors’ Introduction (xvii). The principle of proliferation is the serious form of Feyerabend’s ironically intended anti-methodological principle of anything goes. Indeed, Feyerabend spells out the “Considerations [that] … made me proclaim, in a joking way, a no-method methodology with the principle `anything goes’ as its only methodological rule: if you want a rule that works, come what may, then this rule will have to be as empty and ridiculous as the rule `anything goes’. A researcher must make up his methodology as he goes along just as he must build his instruments and his theories as he goes along.” (225) So, Feyerabend is not anti-methodology per se, but similar to his former teacher and nemesis, Karl Popper, he advocates treating methodologies as instruments for cognitive development rather than as fixed rules – neither fixed in scientific society nor fixed in nature. Scientific methods or principles, including Feyerabend’s principle of proliferation, are social instruments for research and subject to change depending upon the nature, direction, and outcome of the research. I emphasize Feyerabend’s principle of treating methodologies as tools for research because I think it is part of the background for this exploration of how philosophy and science evolve from myth. However, Feyerabend cannot resist the role of provocateur: “In the past anthropology emphasized … myth functions as a social glue, but it has no cognitive content. In the course of my research I started suspecting that myths have cognitive content as well. Moreover, considering that the mythmakers created culture and advanced it to a surprising extent, that the rise of science led to some canvas-cleaning which more than once has thrown out the bad as well as the good I suspected that there might be cases where science and myth are in conflict, but the myth is right, and science is not.” (223) The very next sentence sums up the real importance of myth for Feyerabend where he is not only winking at his readers as a provocateur but more importantly reminding his readers as a serious pluralist philosopher that myth presents alternative worldviews: “myths are fully-fledged alternatives to science with a content and a method of presentation of their own.” (223) Feyerabend’s main innovation when it comes to the study of myth, as so offhandedly stated in his sabbatical request, is that myth is not merely a subject for cultural history – intellectual history, cultural anthropology – but that myth is a subject for the study of an intellectually worthy alternative to science.

The task of the first two chapters of the book is to critique established approaches to myth as under-valuing the cognitive content of myth and the superior practical, nature-aligned, intelligence of the earliest mythmakers and their myths. Feyerabend discusses Stonehenge as an example of the superior practical and social intelligence of our earliest mythmakers. Stonehenge “functions as heavenly clock, forecast station, and religious arena all in one; we should never underestimate the propagandistic skills of the guardians of knowledge, who are always somewhat influenced by religion. Their success serves to strengthen both faith (knowledge) and the power of priests.” (20).

The next two chapters study the cognitive aspect of myths as worldviews – as ways for talking, thinking, and perceiving reality. Those chapters also study the practical aspect of our early myths or worldviews – as ways for guiding the telling of stories, the making of art, and the making of instruments and crafts that in themselves are ways for understanding and controlling reality. For Feyerabend, to all intents and purposes, “to be = to be part of a worldview”. In the terminology of another philosopher very different from Feyerabend in style and in philosophical methodology, Nelson Goodman, worldviews are also ways of making worlds. (Ways of Worldmaking, Nelson Goodman, 1978)

In the remaining three chapters, Feyerabend’s task is to describe the shift from our early worldviews where myths integrate us with nature, to modern worldviews of increasing cognitive abstraction and increasing cognitive/perceptual separation from nature. Feyerabend almost chastises the current quantum mechanical worldview as the most distancing form of our thought where we have created a chasm between ourselves and nature. This is the main point of Feyerabend’s book. The point of post-mythical thought ever widening the chasm between humanity and nature, makes the discussion of the book important for the current state of science, society and politics. I will return to Feyerabend’s worry about the still current state of our world(view) after I describe more of how Feyerabend explains the shift away from the integrated worldview of our ancient myths, to the modern worldviews of philosophy and science.

According to Feyerabend, though many of the ancient Greek pre-Socratic philosophers began the way to the dissolution of the Greek myths consolidated by Homer and Hesiod (chapter 5.1, 5.2), it was Parmenides (chapter 5.3) who created the new continental divide in thought between mythological thinking, on the one side, and philosophical and scientific thinking on the other. According to Feyerabend, the history of philosophy, science, and mathematics are footnotes to Parmenides and his disciple Zeno who discovered the paradoxes concerning continuity versus discreteness, infinity versus finiteness, motion versus rest, momentum versus position. In short, our worldview after Parmenides shifted from humanity integrated with nature, to humanity alienated not only from our own intellectual products but also from nature as we experience it. Nature and reality as we experience it became denigrated as mere appearance according to post-Parmendian philosophy and science.

Though Aristotle according to Feyerabend attempted to close the chasm between abstract thought and practical activity in nature (chapter 6.1), his philosophical system was dissolved by Descartes (6.2), and completely replaced by Galileo and Bacon (6.3). There was no looking back when Newton arrived on the scene with his antagonist, Leibniz (6.5). Later post-Newtonian science with Einstein and his antagonist, Bohr (6.6) pushed the realms of science and mathematics into a parallel universe incomprehensible from the perspective of ordinary lived-experience and practical activity. Post-Newtonian science would even have been incomprehensible to Hegel (6.4) with a dialectic that supposedly comprehends all conceptual dualities where ultimately all will be resolved into a super-conceptual unity – an impossibility according to Feyerabend – where concepts must constantly move to avoid rigidity as well as to adapt to new discoveries and circumstances, including social and political circumstances. In brief, the intellectual asteroid that infinitely opened the chasm between philosophical, scientific and mathematical thought on the one side, and our lived-experience and practical reality in the natural world on the other side, according to Feyerabend, began with Descartes and culminated with Bohr. Feyerabend concisely outlines the intellectual asteroid that blew apart all familiarity with nature and sense of at-homeness with nature: “first, the mathematical approach to nature; second the absence of a foundation; and third, the constant dynamics of concepts” (169)

However, Feyerabend does not want to leave us in total despair that we are forever alienated from nature as a consequence of the development of the anti-mythological worldviews stemming from Parmenides. There is “a return of mythological forms of thought, which seemed to have abandoned human thought forever with Parmenides.” (203-4). In the concluding seventh chapter, Feyerabend expands on what he hopes is the return of myth and “a new philosophy of nature … to create a process that fuses humans and nature into a higher … unit.” (207) The “new unit” will no longer involve “raping our surrounding nature”.(207) Feyerabend’s wishful remarks lead me to wonder: Will that “higher unit” be sufficient to cease the “rape of nature”? Or, will we need finally to put our technologies under democratic control? (See Joseph Agassi, Technology: Philosophical and Social Aspects, 2005)

One might detect an atavistic desire in Feyerabend to return to a supposed golden age of the past where humans with their mythological viewpoints were more integrated with nature. One might also detect in Feyerabend a blind-spot to previous forms of atavism in Nietzsche and Wagner, for instance, regarding romantic attitudes to nature and ancient mythology where the end result was Nazism and Fascism. Feyerabend’s Nietzschean approach not only to myth but to current thinking is evident in his early patterns of thought before developing a fully romantic view of myth. In a 1963 letter to Jack J.C. Smart reprinted in the Appendix he writes, “we may become builders both of new kinds of human beings … and builders of new kinds of commonsense” (219). Such hubris whether in the gods or in humans, as the ancient Greeks knew, is the source of tragedy, mayhem, and murder. The hope to re-enchant nature by reviving ancient mythologies, could be at best escapism from present realities and conditions, but at worst it could be an invitation to propagate racist and supremacist mythologies. Myth-making, contra Feyerabend, is socially, politically, and even intellectually dangerous.