Marx & Philosophy Review of BooksReviews‘Thinking Like a Mall: Environmental Philosophy after the End of Nature’ reviewed by Tarquin Holmes 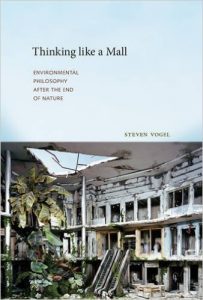 Steven Vogel
Thinking Like a Mall: Environmental Philosophy after the End of Nature

A concept of ‘nature’ is commonly regarded as foundational to environmental philosophy and politics, yet ‘nature’ is an at best nebulous concept that escapes clear definition (‘perhaps the most complex word in the language’ in Raymond William’s oft-quoted assessment). Philosophers have traditionally obviated this ambiguity through advocating either reductionism or pluralism. In Thinking Like a Mall (hence referred to as TLAM) Steven Vogel opts instead for eliminativism, or ‘postnaturalism’. In his view the traditional concept of nature, besides ambiguity, also contains intractable contradictions, most importantly the conflict, identified originally by John Stuart Mill, between nature as totality and nature as non-human. Neither notion, Vogel opines, offers meaningful ground for an environmental ethic – nature as totality cannot be harmed by human activity, whereas nature as non-human cannot be interacted with without being destroyed. The naïve idea that the latter nature can be preserved through being left be, which motivated the ‘wilderness ideal’ of 20th century American conservation, cannot furthermore be sustained, for the pervasiveness of human influence renders all Earthly environments at least somewhat ‘humanised’. This is no recent phenomenon – humans have radically transformed their environment since attaining control of fire. Given these difficulties, Vogel contends, the nature concept proves an obstacle to a practical environmental philosophy and is thus best dispensed with in favour of focus on the built environment as constructed by humans through socially organised labour.

Though disavowing ‘political Marxism’, i.e. Marxist-Leninism and its offshoots (n. 20, p. 245), Vogel’s postnaturalism is very much within the Western Marxist tradition, particularly György Lukács’ early constructivism, as exemplified in the assertion that ‘nature is a social category’. Whilst the Lukácsian roots of Vogel’s environmental arguments are more visible in his earlier book, Against Nature, he does clarify in TLAM that ‘Much of my argument… can be seen as an application of (some of) Lukács’s ideas to environmental philosophy’ (n. 19, p. 245). TLAM’s re-centring of critique on non-Marxian environmental philosophy, as opposed to critical theory’s conceptual difficulties with ‘nature’, is therefore more a change of focus and development of a larger argument rather than a sharp break between the two works.

Before exploring what it might mean to ‘think like a mall’, I will first summarise what Vogel means by ‘environmental philosophy after the end of nature’. The End of Nature, Bill McKibben’s 1989 ecological jeremiad, warned that the global penetration of climate change and other forces of anthropogenic environmental change entailed nature’s final loss of autonomy from human influence. Nature in a certain sense had come to an end, and its surviving remnants could only be saved through wholesale human retreat from dominating and exploiting nature. Vogel accepts McKibben’s premise that if nature is defined as independent from human influence then it may be said to have ended but turns McKibben’s argument on its head, pointing out that, given the ubiquity of human environmental transformation, it is impossible to trace back to a ‘pure’ humanity and nature independent of mutual influence. Assuming otherwise entails embracing a Cartesian dualism whereby human beings are somehow set apart from nature. The wilderness ideal endorsed by McKibben is thus grounded in a denial of humanity’s place in the world; we are merely meddling minds temporarily trespassing in nature’s otherness. Vogel sees this ontological dualism as related to the epistemological dualism found in the empiricist tradition, which similarly stresses passivism as necessary for the proper of attainment of knowledge. Both dualisms therefore deny the necessarily active character of human (and other organismic) worldly being and knowing, and treat as anathema the material transformations that are necessary preconditions for knowledge and conduct.

Vogel espouses focusing on material practices of construction (i.e. praxis) in order to understand human social and environmental interactions. Unlike classic social constructivism, which has a dualist tendency of treating culture and society as an abstract mesh overlaying an independently existing nature, Vogel’s radical constructivism stresses the embeddedness of conceptual construction in material processes of social building. It is not so much that the world need be changed instead of merely interpreted but rather that it is changed through the very process of interpretation. Drawing on Marx, Vogel argues that this collective power to reshape and reconceive our environment is hidden from us by our environmental estrangement, an alienation produced not through departure from nature but instead through its reification as external moral standard. Under capitalism, this fetishisation of nature is moreover exacerbated by the exploitative and atomising conditions of production, which isolate and disempower individuals. The product of their labours, the built environment, then becomes something set against them, a foreign power beyond their control. It is only when we become conscious of nature as our creation that this façade is shattered.

This notion of nature as human production still strikes most environmental philosophers as Promethean hubris. But this, Vogel maintains, is to misunderstand building as a material process. He here targets the intentionalist account of artifice, i.e. the belief human activity differs from other worldly activity because it is deliberative and therefore conscious human interventions are ‘unnatural’. This account grounds, for instance, the environmental ethicist Eric Katz’s claim that ecological restoration projects can never authentically re-create natural landscapes because the processes involved are intentionally driven. Against this further manifestation of dualism, Vogel maintains that not only are human intentions materially embedded within their environs but that they moreover never fully anticipate action’s outcomes – there is always a gap between intention and consequence. Artefacts are not merely manifested intentions but rather always have a life of their own. In building, one thus always works with forces beyond one’s own control and comprehension. These forces should not be confused, Vogel cautions, as manifesting an independent nature, for nature-as-resistance again is a nature beyond human interaction. The resistance of material in building must instead be understood dialectically as part of the building process itself. This interpretation of artefacts as ‘wild’ underlies Vogel’s argument in the book’s title chapter. The title refers to Aldo Leopold’s ‘Thinking Like a Mountain’, a foundational essay in postwar American environmentalism which suggests non-living entities be given moral consideration as integral parts of the landscape. Vogel maintains that Leopold’s arguments, if accepted, should be extended to built artefacts, even eyesores like city malls. Our inclination to treat mountains differently from malls not only reflects the cultural pervasiveness of the wilderness idyll but also our profound neglect of the built environment, the environs within which we principally dwell and which it is our collective responsibility to manage. Therefore, whilst Vogel does not actually argue for the rights of malls, he does believe we need to be more consciously concerned with our building practices and with the question of the environment ought we to have.

How we make positive environmental choices preoccupies the last two chapters of TLAM. As the built environment is produced through collective social practices, Vogel maintains that solutions to environmental crises require collective social action. But which directives should orient this action and what participants are to be involved in decision-making and acting? Here, Vogel’s Habermasian influences become clear – environmental policy is to be determined through democratic deliberation, and because nature is silent it can only be a patient, not a participant, within this process. He hence rejects Bruno Latour’s position that a politics of nature requires a ‘Parliament of Things’, for things ‘cannot ‘parley’, and hence cannot serve in any parliament’(p. 197). Vogel is furthermore sceptical of Latour’s notion that ‘spokespersons’ can stand-in as representatives for nature, as this position would be open to abuse by ventriloquists masking their own interests as those of nature. The upshot of these conclusions is that ‘environmental questions are political questions’ and cannot be resolved through reference to external standards outside the political sphere.

Vogel’s unabashed anthropocentrism will, he acknowledges, be viewed as risking relativism. But, he maintains, this is to misunderstand the nature of sociality. It is true that blindly following individual interest without accounting for its collective effect risks a ‘tragedy of the commons’, as in Garrett Hardin’s model of competing herdsmen grazing increasing numbers of cattle on common land. But what is key in Hardin’s model is that the herdsmen do not communicate with each other and therefore fail to collectively manage their resources. Under the conditions of the market, we too are isolated and feel impelled to seek individual advantage lest we lose out. But if we can communicate, we can determine common goals and values, including environment valuations. These shared values, once recognised, impose ethical restrictions on our environmental conduct, lest we impinge on others’ values.

Vogel’s postnaturalist deliberative democracy, like its Habermasian model, can be accused of being both deflationary and idealistic – deflationary because it reduces environmental ethics to political consensus-building; idealistic in believing that a mere increase in social conscientiousness will produce workable solutions (unlike, say, the ineffective compromises with corporate and other short-term interests typical of liberal democracies). Disappointment with consensus-based parliamentary discourse has led Vogel’s rightist rival, Latour, to suggest the use of top-down coercive force to impose environmental policy. But such crude strategies risk breeding an equally intolerant anti-environmentalist reaction. Perhaps then we should see Vogel’s closing suggestions as indicative not of naïveté but rather of a constrained reformism that treats deliberative democracy not as a panacea but rather as the best working way forward. Vogel’s emphasis is after on practice – consensus-building is difficult but with patience and with the promotion of ecological consciousness, socially approved working solutions can be arrived at. The question is whether, in a world in accelerating environmental crisis, there is time enough for piecemeal social reform, or whether more drastic measures are needed.