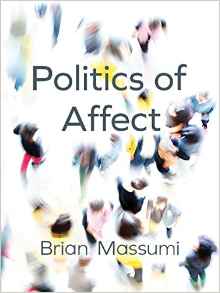 Brian Massumi
The Politics of Affect

Charles Devellennes is a lecturer in political and social thought at the University of Kent. He …

The politics of affect is a subject of study that desperately needs more attention, both in terms of its interconnections in our political lives, and in terms of how we think the political philosophically in relation to affects. Brian Massumi’s Politics of Affect, unfortunately, does neither. There is precious little about politics in this work, or about political thought. While the former may be excusable from such a prominent theorist as Massumi, the latter is not. What the book does, however, is provide a discussion of affects in Spinozist terms, as the power ‘to affect and be affected.’ (ix)

Yet the rather contained definition provided in the introduciton quickly evaporates into multiple directions. Affect is to be ‘open to the world’ (ix), the ‘cutting edge of change’ (ix), present ‘through events’ (ix), ‘positively productive of individualities in relation’ (x), synonymous with ‘hope’ (3), attached to ‘movements of the body’ (4), a ‘virtual co-presence of potentials’ (5), ‘like our human gravitational field’ (17), intensified and diversified by capitalism (20), it is to be a channel to justify sending troops overseas (31), is not a thing, but an event (47), ‘inseperable from the concept of shock’ (53), linked to aesthetic politics (66), applies most properly to populations (95), is not essentially liberatory or progressive (101), and finally is a ‘way to account for experience in its in-forming’ (148). In short, affect, apart from not being a thing, can be observed and experienced in all sorts of relations, from the personal to the social, the micro- to macro-political, the ontic to the (quasi)metaphysic. This wide-ranging use of the term further adds to the confusion about what affects are/are not. There is precious little that would not fit Massumi’s definition, apart perhaps from ‘structuralist’ readings of the term critiqued in chapter three.

The definition of affect is thus broadened beyond repair throughout the work, only to be rewoven together again through a complex use of Deleuze and Guattari as a means to discuss the importance of events in understanding the world. This in itself is neither surprising nor problematic, but Massumi does not engage with others, including Spinozists and Deleuzians, who have widely discussed these themes in the past years, including Bennett’s Vibrant Matter and Connolly’s The Fragility of Things. A more thorough engagement with other works of the affective turn could have helped Massumi further identify political challenges from his own affective ontology, and helped the reader understand the micropolitcal implications mentioned in the text. Nor is the notion of event particularly useful here, as events are used to apply to the trivial and the consequential, personal encounters or political movements. Two examples help illustrate the work’s shortcomings in this respect.

In the first instance, micropolitics is defined as a politics of microperception. This is illustrated by the Obama campaign’s ‘re-cueing of fear towards hope’ (58). This is odd in a number of respects. First, because the book is written towards the end of Obama’s second term, when the largely rhetoric nature of the message of ‘hope’ has become clear to even his strongest sympathisers. Second, because Massumi otherwise rejects faith as a viable political tool (101), only to rephrase it in terms of a ‘belief in the world’ (111). The movement between hope, supposedly of a progressive kind as the one exhibited in the Obama campaign of 2008, and faith, supposedly of a regressive kind, is never explored nor justified in terms of affects. What could have been a productive political discussion on the limits of hope is turned into a rather banal statement about the superiority of progressive politics in their institutionalised form.

Micropolitics can also occur at a more local level. Massumi, together with Erin Manning, participates in the SenseLab in Montreal. Described as an in-between milieu of art and academic institutions, they investigate affective dimensions in participants’ work. One such experiment is described as the ‘furring’ of participants. People were asked to choose a piece of cloth that appealed to them, and were then divided into groups using the fabric to ‘make the space for their interaction’ (75). The groups were then forbidden to report, but Massumi assures us that the creation of what Guattari would have called a ‘subject-group’ led to collaborations that continued after the event. Without wishing to belittle such an event for the participants involved, and the experience of being affected by the fabric of their choice, it is unclear what its articulation tells the reader about the politics of affect. The vagueness of the discussion in the end hinders the illustration of the kinds of practices that take place within this space, which nevertheless sounds prolific and original in its experimentations.

There is one aspect of the book that is beyond reproach: its conclusion, or as Massumi titles the chapter: ‘In lieu of a conclusion’. There, affect is described from a variety of different angles. Each section has a dialectic feel to it, where the dynamism of opposite uses and abuses of affect interact with one another to produce a constructive picture of the concept. For example, the dynamic between ‘good’ and ‘bad’ affects is exposed in the section entitled ‘Affect is good’ (209). There, we read that affects are ethically neutral, with an equal potential to be fascistic or progressive. While the section fails to provide guidance on how to orientate affects towards the latter rather than the former, it nevertheless problematises in the clearest way the possibility of thinking deeply about political affects. It is merely a shame that the work did not expand on this set of relations, as they are certainly worthy of attention and consideration.