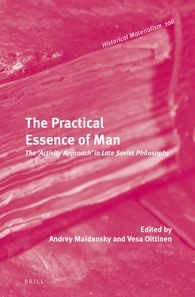 Ivan Uemlianin is a computer programmer living in north Wales. His Phd (1995) was on Vygotsky and …

The book’s purpose is to introduce philosophical activity theory to a new audience, and to present the approach not just as a historical event, but as a “live” area of study, of continued interest and contemporary relevance. The book succeeds in reaching this goal. Little background of the Soviet context is assumed, though explanations and introductions to, for instance, Diamat and Plekhanov, are unobtrusive. Taken together, the essays describe the emergence of philosophical activity theory and its relation to activity theory in psychology, the space of debate opened up by this new approach, and the arc of development of activity theory over the last decades of the Soviet Union. Fruitful connections are made to contemporary concerns, both as possibilities, and as challenges.

The book’s first three essays, by David Bakhurst, Vesa Oittinen, and Andrey Maidansky, respectively, examine the notion of “activity” itself. Bahkurst’s essay Activity and the Search for True Materialism introduces the concept of activity by describing the work of Evald Ilyenkov. For Ilyenkov, activity is a logical category, rather than an empirically observed phenomenon as it might be as studied by a psychologist or anthropologist. It is a basic explanatory device, a unit of analysis, within which the relation between subject and object, thinking and being, can be understood. In ten theses, Bakhurst summarises Ilyenkov’s conception of the Ideal, and how that relates to human activity. For Ilyenkov, ideal phenomena are objectifications or embodiments of human activity.

Oittinen’s essay, “Praxis” as the Criterion of Truth? The Aporias of Soviet Marxism and the Activity Approach, places “activity” in historical context, namely within the development of Marxism, both before, and during the Soviet period, and against the concept of praxis or practice. Friedrich Engels’ 1886 booklet Ludwig Feuerbach included Marx’s Theses on Feuerbach, which Marx had written forty years earlier in 1845. Oittinen notes that ‘[d]espite the fact that Marx’s theses were first published in Engels’s booklet, … the young Marx and the old Engels stressed quite different sides in the idea of praxis’ (30). According to Oittinen, Engels’ position was that, ‘in the process of practice things become “things-for-us”, thereby confuting the Kantian thesis of the unattainability of “things-in-themselves”’. Marx, meanwhile, used practice as a “socio-philosophical concept”, and his theses show a new way of proposing the question of the objectivity of human knowledge, rather than providing an answer. Oittinen shows how Engels’ more assertive use of the term practice was taken up by Plekhanov and Lenin, and became the standard interpretation in the Soviet Union. In the 1960s “activity” (in Russian, deyatel’nost) was a new term in Soviet philosophy. Oittinen notes that there is little discussion in Soviet philosophical literature on how “activity” and “praxis” might be related to each other (13, 29). His implication is that the term “activity” was chosen as a way of avoiding the standard “Engelsian” Diamat interpretation of practice (58).

Andrei Maidansky’s essay Reality as Activity: The Concept of Praxis in Soviet Philosophy foregrounds the influence of Spinoza, both on Ilyenkov and on Marx. Maidansky recalls Marx’s description in the Critique of the Gotha Programme of human labour power as a force of nature. According to Maidansky, ‘[h]ere, the whole world, including human society with its history, can be seen as an action of nature itself’. Maidansky stresses the important innovations of Marxist materialism, namely that humanity and humanity’s creations are part of nature, and that humanity as a whole, rather than an abstracted individual human, is the subject.

A great feature of the book is the number of characters introduced, the discussion of the differences between their ideas, their debates, and their academic developments. The picture painted is one of a vibrant philosophical culture, using official jargon as appropriate, and as necessary. Some of the book’s essays focus on this historical aspect, e.g. The Category of Activity in Soviet Philosophy by Inna Titarenko, The Kiev Pilosophical School by Elena Mareeva, and The Evolution of Batishchev’s Views by Alexander Khamidov. Most of the essays have this concrete, historical aspect.

Three of the most prominent characters are Felix Mikhailov, Genrikh Batishchev and Vadim Mezhuev. Felix Mikhailov (1930-2006) publishedThe Riddle of the Self in 1964, an early and “conspicuous landmark” in the development of activity theory (55). Ilyenkov and Mikhailov became acquainted shortly after The Riddle of the Self was published (56). Genrikh Batishchev (1932-1990) was a student of Ilyenkov’s. Batishchev’s 1963 book The Contradiction as a Category of Dialectical Logic considered subcategories of contradiction as forms of human activity. In Batishchev’s approach, both subject and object were “within” the activity, and were both affected by it. Batishchev’s fore-grounding of the subject’s undergoing change within activity differed from the focus of activity theory and Soviet philosophy in general on object-oriented activity and praxis. Vadim Mezhuev (1933-) was a late arrival into the milieu. His 1977 book Culture and History was a kind of “phenomenology of labour” (43) with Marx’s concept of labour replacing Hegel’s Geist as the substance and subject of world-history.

By the 1970s, the activity approach was losing popularity. Ironically given its earlier outsider status, just by having survived, it became associated with the regime. In the late 70s and into the 80s, Soviet philosophers such as Batishchev, and the Kiev school, were moving away from Marxism altogether.

There are two main areas of contemporary relevance. The first is the extent to which activity theory responds to Kant’s arguments on the objectivity of human knowledge. For Kant, ‘all knowledge is constituted as a synthesis of sensual content and intellectual form’. As the intellectual forms are a priori, ‘[w]e do not have sensual experience of them as they are in themselves, outside the subject–object relation’ (Oittinen, 39). Much is made throughout the volume of the Cartesian source of this Kantian conclusion, and that, as Marxism takes inspiration from Spinoza’s monist materialism, the subject and object are always conceived of as acting within an encompassing whole. So Batishchev (and Shchedrovitsky and others) wrote of activity itself as the system, within which subject and object would operate, both being transformed by the experience.

However, if Ideal phenomena are merely representations of human activity, they do not necessarily reflect anything of the external world at all. This problem is attacked by several essays. Bakhurst maps out some directions in which an adeqate “Ilyenkovian” response to the Kantian limitation might proceed. For Bakhurst it is relevant that ‘the fundamental forms of thought are culturally, rather than psychologically, a priori’ (24). The forms are given to each human individual, but the forms themselves can change over time. The “sensual experience” that influences these forms is the activity of humanity as a whole. Resting the intellectual forms on the activity of the social organisation allows activity theory to ‘avoid the psychologism that is typical for traditional humanism’ (Erik Yudin, quoted in Titarenko’s essay, p. 61).

Lektorsky (The Activity Approach in Soviet Philosophy and Contemporary Cognitive Studies) finds similarities between the activity approach and the “embodied cognition” approach in contemporary cognitive science (e.g. Clark 1997, Rowlands 2013). This draws on more resources for navigating the subject-object interface, and it provides a second area of contemporary relevance for activity theory. This avenue is also explored in Määttänen’s essayThe Concept of the Scheme in the Activity-Theories of Ilyenkov and Piaget. Ilyenkov’s position, according to Määttänen, was that ‘the object of thought is the ability to act. Or, in other words, thinking is anticipation of action. The world is experienced as possibilities of action’ (160, 61). These “possibilities of action” are identified with J. J. Gibson’s “affordances”.

The book as a whole is an inspiring and exciting read. However, it does have some weaknesses and missed opportunities. As a collection of independent essays, it does not have the force and focus that an authored monograph might have: it is a survey of a field, rather than an intervention in a debate.

An example of this lack of focus (of the book as a whole, not of individual essays), is the way contributors to the debate around activity theory are handled. As well as relatively well-known names like Vygotsky and Ilyenkov, over a dozen characters enter the fray. Most of these have little or none of their work published in English. Each author introduces and profiles the personalities relevant to their own essay. The reader certainly gets the impression of an open debate and a vibrant milieu, but little impression of chronological relationships between the characters, including even which of them are still active (at least one of the important “historical” figures is still active, namely Vadim Mezhuev).

Although the book is published at an institutional price point of €99 ($128), Haymarket Books publish an affordable paperback. My review copy was a pdf so I can’t comment on production quality (printing, binding, etc.).

I would recommend the book to interested individuals, and to psychology and philosophy departments with interest in areas like: Vygotsky and activity theory in psychology; externalist philosophies of mind; dialogues between continental/Marxist philosophies and Western/Analytic philosophies.