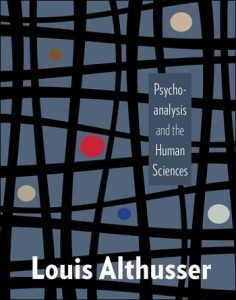 Louis Althusser’s Psychoanalysis and the Human Sciences contains the texts of two lectures from his 1963-4 seminar series on Lacan and psychoanalysis. These lectures demonstrate Althusser’s interest in certain theoretical questions well before the seminar that led to the momentous publication of Reading Capital in 1965. Along with a paper published in the same year in 1963, ‘Philosophy and the Human Sciences’, and in the next, ‘Freud and Lacan’, these lectures mark one of Althusser’s first explicit theoretical engagements with Lacan. In the first lecture, ‘The Place of Psychoanalysis in the Human Sciences’, Althusser declares his aim clearly in his opening remarks: “Through an interpretation of Lacan, we shall seek to determine the place of psychoanalysis in the human sciences today” (1). Althusser’s explication of this problem begins “by recounting the story of [his] own encounter with this problem” (2), which he later calls “the autobiographical and intellectual side of the exposition of the problem” (19). He devotes a few pages to explicating what he sees as psychoanalysis’ vexed reception since Freud. This, he argues, is because of the contradiction “between what Freud designates by his concepts and the theoretical status of concepts that are obviously borrowed” (5), or later, “between Freud concepts and the concrete content of what he calls psychoanalysis” (6). The historical moment limits Freud’s concepts, for the longest time, in various forms of ‘ego psychology’. As psychoanalysis is “a technique situated in practice itself” (7), in therapy, we must necessarily pass through “the concrete experience” of psychoanalytic therapy. But thus far, “nothing we’re told about therapy ever succeeds in reaching the point where a theory of therapy could be transformed into a theory of psychoanalysis itself” (10).

Studying the concrete effects of ‘psychoanalysis’, its historical schools and theories, Althusser is able to delineate two tendencies: ‘psychoanalysis’, “which is really concrete psychology without psychology knowing it” (16), and classical ego-psychology, which operates by “abstraction […] theory of the unconsciousness, the ‘id’ as a reality interior to consciousness, as something irreducible” (16). Althusser discusses what is, for him, a founding point of psychology, Georges Politzer’s text, which declared that “neither [psychology’s] concepts or its objects exist” (14). The weakness of the phenomenological traditions is that they fail to understand that “the essence of the subject is the unconscious.” At this point, he revisits his original question: “what is the current status of psychoanalysis in relation to the human sciences and particular in relation to psychology?” (19) Althusser’s division of ‘psychoanalysis’ and ‘psychology’ as two distinct tendencies anticipates his ‘lines of demarcation’ between the ‘scientific’ and the ‘ideological’ in later works like Lenin and Philosophy. This theoretical division addresses Althusser’s lifelong concern in interrogating the ‘philosophy of the consciousness’, popularized in France by thinkers like Sartre, Merleau-Ponty, and Ricoeur. He further analyzes the “domains” (31) where psychoanalysis meets with other human sciences such as biology, anthropology, and society, and describes these ‘ideological’ exploitations of psychoanalysis.

In the exchange between psychoanalysis and philosophy, he writes that “psychoanalysis is going to give philosophy the concrete, and philosophy is going to give psychoanalysis concepts” (32). The concrete therapeutic practice of psychoanalysis provides philosophy with the experience, while philosophy lends its concepts to give meaning to psychoanalysis. Two questions arise at this point, “what differentiates the domain of psychoanalysis from that of psychology”, and “between psychoanalysis and the philosophy of intersubjectivity?” (38-9) The various forms of psychology, existential psychology, ego psychology, for Althusser, do not describe “what’s happening in psychoanalytic reality itself” (39). Althusser ends this first lecture by stating that only Lacan so far has been able to deal with these issues. But while “Lacan is a historical phenomenon […] he’s enclosed behind a whole series of enigmas” (40). Lacan’s elusiveness and difficulty, as Althusser says, is not based “out of a decision made by the will, but on the basis of the theoretical certainty that what he says is founded”, implying their mutual identification against the ‘philosophies of the consciousness’ and, as Jean Cavaillies expressed decades earlier, toward a “philosophy of the concept.” Leaving an explicit engagement with Lacan for his next presentation, Althusser ends his first lecture by stating the necessity of “translating Lacan” (43).

In the second lecture, Althusser argues that Lacan’s intervention in psychoanalysis marked an ‘epistemological break’ that has “a capacity to upset the field against which it stands out” (48). Althusser emphasizes that it is necessary for this break to occur immanently, “within the field itself” (48), as “a total restructuring of the field” in order for new knowledge to arise (49). This move anticipates the notion of ‘epistemological break’ in Althusser’s restructuring of Marx in Reading Capital only a few years later. But what it more interesting here is Althusser’s critique of psychology for its adherence to transcendence and interiority while struggling to articulate how the larger thematic ‘structure’ of psychoanalysis after Lacan can avoid these same issues. In other words, a question implicitly posed here, perhaps even unintended by Althusser at that moment, is: how can the structures and discipline of psychoanalysis, with all its ‘ruptural’ interventions, think beyond structure and transcendence? He writes, in psychology, “the unconscious becomes an interior of consciousness” (71). Lacan’s method begins to disrupt this view of a clear divide between exteriority and interiority of structure. A symptomatic treatment of Althusser’s own lecture here would reveal a persistent engagement with the notion of ‘structure’, even though it is never clearly defined or directly reckoned with. As Althusser notes, Plato’s political hierarchy in the Republic is anchored in a central contradiction, namely that “between the structure of the human being and the function this structure is supposed to perform in society” (77). This observation notices the role of the function of a structure in its contradictions, in what it is intended to do, what it actually is doing, etc – various lines of demarcation that Althusser would explicitly explore further in the wake of Reading Capital.

The final section of the lecture deals with Descartes and Spinoza on error and the subject. In fact, curiously, Althusser’s modest espousal of Lacan’s psychoanalytic intervention in psychology at the end of the last lecture appears to be subsumed or explained by means of Spinoza’s critique of Descartes. In Spinoza, “psychological subjects” are merely “functions of this world of the imaginary” (imaginary, in a Spinozist sense). Here, Althusser finds the need to describe the category of ‘error’ in Descartes’ thought, stating that “Descartes’ problematic […] opposes truth to error” (81). Error, in Descartes, is “the negative other of truth […] the relation of error to truth is conceived as a dividing up, that is, as the result of a judgment, as a dividing up that establishes an exclusion” (81-2). This leads to all philosophies of the cogito or consciousness as centering on a “subject of imputation, of the moral subject” (84), “a contamination of the ethical categories by the moral and religious categories of the subject of imputation” (85) – a tendency that Spinoza criticizes in his Tractatus. Althusser further states, “a social structure […] necessarily produces this subject in order to be able to subsist” (85). This is the reality of Cartesian metaphysics, existentialism, and ego psychology – it is dependent upon a certain transcendence and subjectivity.

Althusser’s abrupt invocation of Spinoza toward the end of this last lecture expresses a variety of issues. Why is a lecture series devoted to Lacan and psychoanalysis curiously evasive of Lacan, especially after a proclamation that “translating Lacan is a very important cultural necessity” (43)? The Althusser of these ’62-3 lectures is already much more favorable toward Lacan than the late Althusser, but the necessary task of “translating Lacan” still seems to move us beyond psychoanalysis and back to Spinoza. Also, the lectures suggest that psychoanalysis is not to be a new structure of concepts contra the ideological project of psychology. Psychoanalysis, as an epistemological break, is “a phenomenon of rupture” that “upsets the field against which it stands out” (48). Note the terms in which Althusser describes psychoanalysis: it is a “total restructuring”, “a situation”, “the instauration”, and “redistribution” (49), in other words, a singularity rather than structure. Rather than being a solution, a teleological advancement from psychology, psychoanalysis functions like a catalyst, a revolutionary moment within a relevant field. As the shift to Spinoza demonstrates, Althusser’s careful distinction of psychoanalysis from psychology is contingent on the insurgent battle between concepts, rather than a doctrinal espousal of one discipline over the other. The peculiar treatment of the structure of psychoanalysis in these lectures may also be symptomatic of Althusser’s inability to fully critique all notions of transcendence and latent structures quite yet. Pierre Macherey’s critique of Althusser’s use of ‘structured wholes’ in Reading Capital a few years after these lectures testifies to Althusser’s uncertainty of how exactly to position himself away from the transcendent structures of phenomenology and even structuralism. The two lectures outline an early attempt to think beyond the varying philosophies of consciousness and the subject in the French intellectual scene of the day – phenomenology, psychology, existentialism, and most importantly for Althusser, Marxism. In this light, Althusser’s seemingly clear task to situate and “to determine the place of psychoanalysis in the human sciences today” (1) may belie a more tactical and symptomatic endeavor after all.