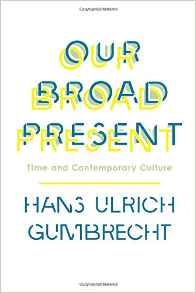 In Our Broad Present: Time and Contemporary Culture, Hans Ulrich Gumbrecht produces elegant and nuanced reflections on a variety of subjects such as the aesthetics of sport as a source of cultural re-enchantment, globalization, engaging the classics today, the diminishing availability of tactile experience, and the concomitant loss of presence. The chapters cohere loosely around the fundamental idea that we are living in a configuration of time and history that Gumbrecht calls the broad present.

Gumbrecht’s flexible and innovative approach to phenomenology and hermeneutics opens a field of problems that are directly relevant to 21st century Marxist theory and practice. The first is the relationship between the broad present and its antecedent, the modernist historical consciousness, of which Marxism is the most refined and developed form. The second issue is the connection between historical memory and social justice. The third issue is how to employ Marxist concepts, such as reification, class consciousness, and solidarity, in tandem with Gumbrecht’s analysis of the broad present.

First, the broad present: what is it? The broad present is a new chronotope, a concept that Gumbrecht uses to demarcate the social construction of time, history, and temporal experience. He is not referring specifically to the meaning or use of the term chronotope as developed by Mikhail Bakhtin. Gumbrecht’s idea is that this chronotope, the broad present, frames our everyday awareness of time, history, change, and agency, transforming the way we situate ourselves in time as we relate to past, present, and future.

The broad present is characterized by a future that we experience as closing in upon us at an increasing rate. What was once conceived of as an open horizon of possibilities for social and personal development now confronts us in the form of limits, constraints, and emergencies.

The past, on the other hand, continues to expand into the present in the form of a disembedded and decentralized sea of intersecting, overlapping, and contradictory narratives, facts, and events that can never be left behind or transcended.

Importantly, the broad present is not another stage in history. It is a reconfiguration of the experience and perception of temporality and history that allows for divergent historical narratives. By narrowing the scope of possibility that the future once betokened and releasing the past into the present, all previous modes of historical transformation, regardless of their content as narratives of progress, decline, or stagnation have been absorbed.

From this perspective, the modernist historical consciousness, reaching its zenith in Marxism, has not been superseded or refuted. It is available as one possible path in a multi-directional temporality that can accommodate reactionary nostalgia, golden age thinking, post-human utopias, ecological and technological dystopias, and histories of the future.

One of Marx’s brilliant achievements was to locate the ideals of enlightenment, autonomy, self-actualization, and societal transformation in a framework of historical materialism where the economic and technological forces that destroy traditional fetters and illusions simultaneously open a horizon of future possibilities for revolutionary praxis. One significant reason for the continued vitality and coherence of Marxist movements in the 20th century was the shared assumption that history has a direction with two possible outcomes, socialism or barbarism.

Now it seems that the chronotope of the broad present uproots the modern historical consciousness in all its forms, including Marxism, and presents it as one way of living in the present, rather than a way to remake society and shape the direction of history. The future, closed and closing in, is no longer an expanding dimension of freedom, human agency, and self-actualization.

This is not to suggest a doomsday prediction in Gumbrecht’s work, nor does the closed future necessarily preclude freedom and agency. However, it may not be agency conceived of in terms of the modernist historical consciousness, wherein the agent of history is situated on a series of pivotal points on a timeline. Looking backward, the agent reflects upon a past consisting of a series of tragic but edifying mistakes that are over and done with. From the vantage point of this tiny dot, the agent then surveys a vast open field of possibilities, the future. And she makes it happen.

Gumbrecht is quick to point out that some institutional processes, especially politics, rely upon and reproduce the modern historical consciousness. Even if it is an obsolete script, it allows politicians to address the public as reformers and problem solvers who will leave the mistakes of the past behind and usher in the future, or as leaders who will return us to the stability of an imagined golden age.

Yet, most dimensions of everyday life around the globe exhibit a practical, relational, orientation toward past, present, and future. Time is no longer experienced as separate moments on a timeline, but as a malleable web of temporality. Interactions and business transactions, communicating online, paying bills, and constructing an identity happen when and how we attend to them. A different sense of time emerges as a condition of the type of interaction we are involved in. These are some of the conditions encountered in the experience of the broad present.

I want to turn now to the relationship between historical remembrance and social justice under these conditions, assuming for the moment, they exist, since the experience of living in the broad present isn’t an empirically verifiable hypothesis at this point. For many people subjected to colonial and postcolonial domination, the future contains a haunted past that will not go away and has not been overcome. To help remedy this problem, truth and reconciliation commissions are formed to identify, clarify, and resolve the injustices committed in the past. Once redeemed, the past can be the basis for a vision of the future.

Yet, in the broad present a multitude of plausible historical explanations are available for different constituencies, whose adherence to these explanations solidifies over time into social realities that often have real physical consequences. This complexity is a bit different from information overload. Instead, it is the problem of overdetermination, stated generally as a condition where there is a surplus of causes for any given event. One can reformulate the events and the suffering of the past, reshuffling the perpetrators and victims, change the direction and meaning of history and time, locating some events in eternity, others in a historical destiny, and so forth.

Seen more optimistically, the broad present, with its ever-available past, places us all in a context of availability where the history of injustice presses in upon us, often insistently, such that it becomes part of the fabric of contemporary social life. It may be precisely because historical events have an ahistorical feel that they have become approachable, and, even when taken out of context, comprehensible in an Aristotelian sense where the poetic truth is more relevant, philosophically and otherwise, than the details of history. Appropriation and reformulation has never been so easy. History is retrieved, reformulated, analogized, and extended, often sympathetically, to other conditions of suffering and oppression.

How do Marxist concepts, such as reification, class consciousness, and solidarity apply in the broad present? Starting from the undeniable observation that many people live in a hyper mediated state, simultaneously plugged into any number of devices, communicating in ‘real time’ with one or more people while sending messages into the future via social media while watching a contemporary version of a classic film, consider the method of looking behind, or looking underneath, as it applies to commodity fetishism and reification. Unravelling the mystery of the commodity requires tracing its history and birth to the system that created it, revealing the system of exploitation and exposing this reality so that it may be transcended.

Difficult as this tracing exercise is, looking beneath the surface of the commodity, or of anything, becomes even more complicated in a broad present where history exists everywhere all at once. For example, when pressed, perhaps by a professor, to acknowledge the historicity of the commodities we purchase, we can shift the question by referring to a future that will solve the problems of capitalism. Given enough time, every assembly line worker who helps her robot helper attach door panels to luxury sedans will one day own such a sedan.

Conversely, a closed future, under the threat of imminent ecological catastrophe might be a better basis for raising consciousness and creating progressive solidarity, because it is much harder to ignore. Ecological threats directly impact or can easily be conceived of as impacting all of us directly. Large-scale ecological threats cannot be localized, deferred, or handed over to the future for a solution. The ecological future is closing in upon us as a catastrophe that is intensifying. It is pushing its problems upon us, instead of dispersing them and eventually solving them.

Awareness of the pressure and complexity coming from the future has contributed to a heightened spatial awareness. As we witness and experience the global compression of time and space, along with issues such as diminishing resources located in inaccessible or hostile territories, the future shuts down and the spatial ground announces itself. We begin to redraw the boundaries between the living and the dead, animals and humans, and neighbors and enemies.

In the shadow of the historical cataclysm, geographical and spatial modes of thinking and philosophizing have also re-emerged.

Perhaps it is part of a search for spheres and cocoons in which we can ground our existence and find some ontological security, gaining a foothold on ground that we cannot find in the broad present. This new spatial consciousness produces a different awareness of causality, something like the Buddhist concept of dependent origination. In the spatial mode, solidarity can be conceived of in terms of coexistence, interdependence, process, and impermanence, rather than destruction, creation, and triumphal ascent.