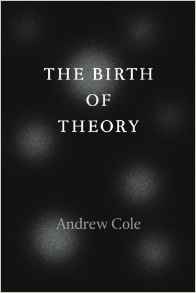 Andrew Cole
The Birth of Theory

To write a book called The Birth of Theory these days is to engage in a paradoxical project, as if one were tracing the sources of a river long dried up. In all quarters, it seems, theory has been proclaimed dead, whether by its lugubrious mourners (such as Terry Eagleton in After Theory) or by any number of celebrants delighted to dance on its grave (one thinks of Rita Felski’s The Limits of Critique and its almost cult-like following). Considering the many recent eulogies for theory, a study of theory’s origins seems rather untimely. However, perhaps in the spirit of Nietzsche’s “untimely meditations,” Andrew Cole’s complex, surprising, and evocative book is a welcome contribution to contemporary criticism. The Birth of Theory, in fact, makes a strong case not only for Cole’s fascinating argument concerning theory’s origins in Hegel’s return to medieval thought, but also for the persistent value of and necessity for critical theory in our own time.

The argument of The Birth of Theory is provocative. It attempts several key manoeuvers, and in the main, it succeeds in pulling them off. First, as a preliminary matter, it gives definition to “theory,” distinguishing it from philosophy and other genres. In so doing, it launches a powerful defense of Hegel as the main progenitor of theory, and it thus opposes the ostensible anti-Hegelianism of such leading poststructuralists as Althusser, Deleuze, and Derrida, who are often most closely associated with theoretical practice in the twentieth century. Then, Cole establishes the degree to which Hegel’s thought is indebted to a return to medieval philosophy, particularly that of Plotinus; Cole also makes a convincing case for grounding Hegel’s only apparently idealistic thought in the material facts of feudalism. Indeed, this Hegel is much more of a materialist, and Cole goes so far as to name him “presciently Marxist” (65). Cole goes on to argue that the dialectic properly understood, as originating in Hegel’s rethinking of a medieval paradigm (specifically, the dialectic of identity and difference), makes possible the Marxist interpretive project of ideology critique, while also highlighting the foundational importance of figural thinking for understanding, and imagining alternatives to, the world in which we live.

This ridiculously brief summary does not do justice to Cole’s multivalenced, detailed study of the birth of theory in the Hegelian dialectic and the continuing value of dialectical criticism. In defining “theory,” Cole follows Fredric Jameson in seeing theory as emerging from philosophy with the realization that “thought is linguistic or material and that concepts cannot exist independently of their linguistic expression” (qtd. xii). Cole notes that theory is “the move away from philosophy within philosophy itself” (xi), and Hegel represents the ur-theorist insofar as he (in the Introduction to The Phenomenology of Spirit) disallows for any transcendental subject, ego, or res cogitans that can adequately account for experience of the world, while also recognizing that conceptualizing is dependent upon both language and history. In The Birth of Theory, these three aspects of theory to be found in Hegel can be envisioned as points of departure for theoretical practices that later emerge in the wake of Marx, Nietzsche, and Freud.

Cole opens The Birth of Theory with a vivid figure for dialectical thought, the dual-visioned whale as imagined by Melville in Moby-Dick, with eyes on either side of its head that can see wholly separate and distinct images at once. From this literary figure, Cole dives into a painstaking discussion of Nietzsche’s The Birth of Tragedy, demonstrating how its “untimely dialectic” is in unexpected ways informed by the same sort of thinking as Hegel explores. Cole then looks more closely at the medieval dialectic that Hegel resurrects in order to concentrate upon the mysterious unity of identity and difference. In this, Hegel eschewed Kant’s critical philosophy, which had dismissed the philosophical discourse of the Middle Ages as so much “dogmatism,” and forged a new way of thinking, but one which was formed in connection to its residual medievalism along with its emergent modernism. Hegel here not only paves the way for Marx’s historical materialism, but for modern critical theory more generally, as Hegel’s theory discloses the presence of the residual and the emergent in the existing state of affairs.

The central section of The Birth of Theory deals with history, and in it Cole establishes the degree to which Hegel’s famous Master/Slave dialectic, or more accurately, Lord/Bondman dialectic, derived from the material circumstances of feudalism. Cole emphasizes the appropriateness of the “Lord/Bondsman” translation with respect both to Hegel’s language and to the social formation he imagines. Contrary to common belief, Cole argues, Hegel does not imagine the distinction in terms of Roman antiquity, in which a slave [Sklave] is conquered and enslaved, but rather in terms of the feudal order, in which a serf [Knecht] is subject to lordship [Herrenschaft]. Cole notes that Hegel explicitly distinguishes between slavery and this lordship-bondage relation. Moreover, Cole points out that the political and economic system of feudalism remained in place in the Germanic states throughout Hegel’s own lifetime, such that the medieval social order was, in many ways, still intact in the early nineteenth century. As such, the struggle for recognition—or, rather possession, since property was the crucial element of the struggle—dramatized in Hegel’s Herr/Knecht dialectic is not nearly as abstract as has been supposed, but is actually grounded in the present social formation, which retains aspects of the medieval world. Along these lines, Cole also argues that Hegel’s theory of the Christian eucharist ceremony, with its transubstantiation of subject and object, informs Marx’s famous meditation on the commodity fetish in Capital. Examining these theories in light of the historical circumstances, Cole finds Hegel to be already somewhat Marxist, while also showing how deeply influenced by Hegel Marx himself remained.

In the final section, Cole demonstrates the significance of this theory to literature, broadly conceived, as he connects political economy to critique, dialectical interpretation, and an ultimately utopian perspective in which alterity (difference) enfolded into identity makes possible new spaces for thought and practice. At this point, Cole brings in the work of such theorists as Bakhtin, Lukács, Jameson, and Deleuze to show how these concepts from the Hegelian dialectic, whether acknowledged or not, strengthen the ability of theoretical practice to make sense of the world. Of particular interest is the way that Cole brings to the fore the significance of the figure (Erich Auerbach, who is mentioned once, is a mostly absent presence here, in my view), which in tandem with the concept, enables theory to be far more effective. “Figures get concepts unstuck; they also summon them, and show us how concepts work” (160). Literature is thus the proper field in which theory unveils its power via interpretation, but a form of interpretation less interested in “finding” meaning than in constructing alternative ways of seeing the world. In this sense, theory is inevitably utopian (as Jameson might suggest), since, as Cole puts it, “a utopian point of view can warrant the thought of the past as a possibility given to the present but born of historical difference, the sheer fact that because things were different then they can be different now and later—very different. There are others ways, other worlds, for this world. And dialectical interpretation, as a utopian form, opens up the relay between past and present to helps us find these ways” (165). The Birth of Theory not only explores the origins of theory, but demonstrates how theory continues to operate as a critical and speculative force for interpreting our own situation in the world and its alternatives.

The Birth of Theory is a difficult book, owing to the complexity of its ideas and the scope of its subject, but the writing itself is quite lucid, even conversational at times. Cole’s prose is often scintillating, and his use of vivid imagery helps to make even the most densely dialectical concepts more easily understood. For example, in speaking of the relationship between literature and the dialectic in the history of critical theory, Cole imagines “a comedy of capers and hijinks,” in which “Literature personified has tried at all costs to get away from Dialectics in its most vulgar (i.e., reflectionist) guise—circling the table, head-faking first this way then that, before running up over the sofa and out the door” (107–108). Cole’s erudition is apparent, as witnessed in his frequently detailed and illuminating endnotes, which take up over 60 pages or about a quarter of the text. These notes not only cite relevant sources but often supplement the writing, fleshing out and extending the argument made in the main body of the text in order to establish new connections between concepts, history, and political theory. The Birth of Theory is a text that rewards rereading, and I expect that it will serve for many years as a major contribution to the study of Hegel, Marxism, medieval thought, and literary criticism and theory more generally.

In its fresh take on the dialectical thought and its crucial relationship to critical theory, The Birth of Theory is a marvel. Particularly in an era in which theory has been either mourned or celebrated as being passé, Cole’s study of the birth of theory is itself an example of a sort of “rebirth of theory” in the twenty-first century. The decline and fall of “theory” in literary studies in the 1990s was overdetermined, to be sure. For all of the crass careerism and ideology of the text associated with theory’s popularity in academe during its heyday, the real resistance to theory was, as Jameson and others have noted, a rejection of Marxism. At the end of the Cold War, Francis Fukuyama’s (not Hegel’s) “end of history,” critics felt comfortable moving on to anodyne “cultural studies,” leaving theory behind. Critical discourse suffered, unsurprisingly, from this lack of theoretical perspective, as various “approaches” became poor substitutes for thinking. And yet, when has the world been in greater need of critical theory than today? In The Birth of Theory, by exploring the conditions of its beginnings, Cole reminds us of the effectiveness of critical theory in the present and indicates directions theory make take in the future.