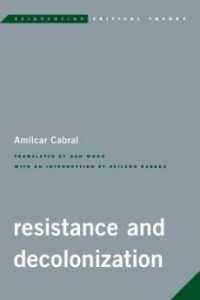 Reiland Rabaka, in her introduction to Resistance and Decolonialization, refers to Amílcar Lopes da Costa Cabral as an ‘organic intellectual activist’. Being an ‘organic intellectual activist’ entails grounding normative proposals in local realities and struggles. Cabral’s local reality was Portuguese colonialism and he fought against it as a founding member of the African Party for the Independence of Guinea and Cape Verde (PAIGC). PAIGC engaged in civil protest at first, but later utilized armed resistance in 1960s and during the Guinea-Bissau War of Independence that followed. Cabral was assassinated in 1973 before the independence of Guinea-Bissau and Cape Verde.

Much of Cabral’s work is in the form of speeches to his comrades, leading some to ignore or undermine his importance. Such disregard is a considerable oversight as Cabral offers significant contributions to Africana Critical Theory and is valuable to scholars interested in Marxism, Political Science, and Cultural Studies. Gratefully, Resistance and Decolonialization corrects this undervaluation. In Part One of the book, pieces by Reiland Rabaka (3-42) and Dan Wood (43-69) discuss common misinterpretations of Cabral and offer the reader helpful suggestions on how to approach Cabral’s work. The depth and space of their task unfortunately allows for less of Cabral’s own writing (featured in Part Two) where Wood offers the first English translations of Analysis of a Few Types of Resistance (75-156) and The Role of Culture in the Struggle for Independence (159-179).

One difficulty in the application of Cabralism noted by Rabaka is the tendency to treat his thinking as a singularity that fits neatly within departmental or theoretical molds. Often the mold Cabral has been inserted into is Marxism. The decision to label Cabral as such likely stems from the importance of Marxism in establishing the national liberation movement in Guniea-Bissau and Cape Verde (7). While Cabral certainly draws on Marxism, he also criticizes and expands it.

Cabral follows Fanon in believing that Marxism can be extended to the wretched of the earth, but Rabaka points out how his ultimate aim was for a wholly unique critical theory that was more in tune with the needs of distinct societies undergoing decolonialization. As opposed to class struggle, Cabral stresses the importance of national liberation struggles. In doing so, Cabral did not find Marx to be especially helpful as he argued Marx ‘exaggerated the primacy of class and, in almost every instance downplayed the salience of race, gender, sexuality, and other cultural and identity issues, areas, and/or arenas’ (27). Cabral’s point is well-taken as Marx’s writings have a deficiency in cultural and intersectional thinking.

How does Cabral believe Marx should aid in decolonialization then? There are two Marxist components in particular that influence Cabral: materialism and praxis. Cabral’s materialism is present in his commitment to uncovering the concrete conditions of the world and altering them to address human needs and suffering. Cabral was most concerned with the economic and social consequences of imperialism and colonialism and how each unfolds differently depending on particular historical conditions and socio-economic systems. In conjunction with materialism, Cabral engaged in praxis, which included not only engagement with people, but also an associated openness and responsiveness to change. Cabral’s praxis started from his engagement with his people in an agricultural census and continued throughout his career (7). Cabral did not stray from joining his people in farming or everyday armed struggle and – indeed, he noted the importance and honor in these tasks. His engagement with the people and awareness of everyday struggles in the resistance movement pushed Cabral to have a theoretical openness so his thoughts could account for changes and grow with new experiences and challenges.

Both materialism and praxis are well exemplified in the second piece translated by Wood, The Role of Culture in the Struggle for Independence, which written in 1972 for the United Nations Educational, Scientific and Cultural Organization. Therein Cabral argues that culture provides ‘a prelude to the pre-independence movement or the struggle for liberation from the foreign yoke’ (166). To Cabral, culture consists of history and it is through materialism that we can discern the social reality a culture is experiencing. That social reality is a combination of economic, political, social, and cultural factors. While Marx claims the economic factor is most relevant, Cabral maintains that ‘identity is the expression of culture’ so understanding the individual and the collective requires cultural context (169). The aim of colonialism and imperialism is to halt culture; that is to hinder or destroy the expression of the oppressed culture or to remake culture in the vision of the oppressor. Cabral argues these goals fail, however, as other than through death, there is an ‘indestructible character of the cultural resistance of the people – the popular masses- in the face of foreign domination’ (162). Cultural resistance thus preserves history, both of the oppressed and the oppressors who try to hide or mask what they have done.

Understanding culture as a material and dynamic entity speaks directly to cultural movements today, such as Black Lives Matter and Indigenous movements, wherein individuals make cultural and identity claims. Indeed, Cabral appears to have anticipated the importance of culture that results in individuals seeking to ‘return to one’s origins’ (166). He argues that such attempts are the product of colonialism, or more accurately the limit colonialism places on the native petite bourgeoisie whom are brought into the colonial system only to be viewed as inferior and frustrated by their imposed limitations. Although the native petite bourgeoisie engage with the oppressor, assimilation is never fully possible or even desirable from the oppressor’s point of view. The oppressor does not wish to have the oppressed as equals. Once realizing they will not be equals to their colonizer, the native petite bourgeoisie return to their culture as it is in their class interest to engage in class suicide and join their oppressed cultural group more fully. Only by doing so can the native petite bourgeoisie have the equality and liberty they desire. Cabral points out that these efforts at mobilizing change launch liberation movements.

After the liberation movement is initiated, Analysis of a Few Types of Resistance by Cabral in November 1969 provides a series of directives on how to carry out liberation. In what is known as the square of resistance, Cabral goes over four forms of resistance that correspond to a colonial oppression: political, armed, cultural, and economic resistance. Within these directives it is possible to ascertain both the grand ambitions of the national liberation movement, in conjunction with the concrete and quite banal difficulties they faced. While it would be easy to gloss over the concrete conditions of the movement, Cabral takes care to ensure that those listening are aware of the reality unfolding, from the messiness and dissent to the success and continuing goals.

Political resistance is concerned with the unification of the people and a clear delineation of what that people constitutes. An understanding of the people is essential for the national liberation movement for Cabral as the goal is to have the people direct their own lives and that requires a sense of peoplehood. Furthermore, it is this political consciousness that ‘guides the gun, and not the gun that guides his consciousness’ (79). Armed resistance is then only for moments when political resistance is not enough. Cabral believes it is culture that will promote individuals to serve and sacrifice themselves in armed resistance as he suggests links between culture, patriotism, and heroism. The cultured are those who want to transform their oppressive situation and will go to any lengths to do so. Cultures in-themselves are changed through struggle as well since Cabral seeks to only ‘converse what is in fact useful and constructive’ in the culture moving forward (118). He thus discredits those who ‘have pride in their uncombed hair’ as ‘for our dignity, in order to open new paths of life, the way in which we behave has great importance’ (127). Here Cabral shows how resistance must at once be focused on decolonialization and reconstruction. His thoughts on economic resistance similarly engage with the importance throughout decolonization of providing ‘satiated stomachs and good health’ (94), in addition to the larger reconstructive goal of diversifying the economy.

Regrettably, the cultural and economic resistance Cabral presents seems to veer towards undermining Guinea-Bissau’s and Cape Verde’s indigenous culture in favor of cosmopolitanism and capitalism. At one point, he argues that his party members should speak Portuguese as it has important words in mathematics, for instance, that are not present in their own language (134-5). However, speaking in the foreign tongue involves, at least in part, an acceptance of the colonized mindset. What of those words that likewise cannot be translated from Creole or Balanta to Portuguese? Are they to be done away with because they are no longer seen as useful to capitalizing society? Cabral speaks of individuals in a similarly troubling way as he suggests that ‘[w]hoever stops working because they already worked a lot yesterday isn’t worth anything, was never worth anything’ (109).

Despite these concerns, Cabral offers rich insight into the role and importance of culture in expanding Marxism to address modern national liberation and identity movements. Cabral is then useful to a broad range of philosophers and activists in critical race theory, politics of identity, transitional justice, and decolonialism. More generally, Resistance and Decolonialization is essential and successful in rendering African critical theory and its rich insights more visible.