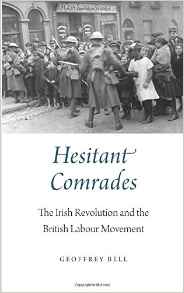 Tony Collins is professor of history at De Montfort University. His British Communism and …

‘The English working class will never accomplish anything before it has got rid of Ireland,’ wrote Marx to Engels in December 1869 in one of his most famous observations about the British occupation of Ireland. Geoffrey Bell’s fascinating and detailed history of the British labour movement’s attitude to the events in Ireland of 1919-21 not only explores almost the entire range of opinion from the Fabian Society to the Communist Party, but also demonstrates just how committed to not ‘getting rid of Ireland’ the Labour Party and the leadership of the trade unions were during a period of extraordinary crisis for the British ruling class.

The leadership of the British labour movement had traditionally stood alongside ‘its’ own ruling class when it came to Ireland. Despite significant Chartist support for Irish independence in the 1830s and 1840s, reformist leaders had little sympathy for the Irish. Hesitant Comrades is well-stocked with egregious examples of Labour’s pro-imperialist history on Ireland. The Independent Labour Party leader, John Bruce Glasier, was probably not alone in his belief that ‘there seems to be a flaw – a fatal lesion – in Irish character that unfits the people for rational and progressive life’. It wasn’t until 1913 that the Labour Party adopted a policy for Ireland; and then it merely followed in the wake of the Liberal Party and endorsed Home Rule, which ensured that Irish foreign policy, police, and customs and excise policy would remain under British control.

The 1916 Easter Rising was met with ringing condemnation from the Labour Party. George Lansbury’s Daily Herald declared that ‘no lover of peace can do anything but deplore the outbreak in Dublin’ while the ILP’s Labour Leader sought to ‘condemn as strongly as anyone those who were immediately responsible for the revolt’. Arthur Henderson, the Labour Party’s member of the war-time cabinet, reportedly cheered in the House of Commons when the first executions of captured Easter Rising prisoners were announced.

But in the aftermath of World War One and the Russian Revolution, the growing radicalisation of British workers posed a threat to the pro-imperialist stranglehold of the Labour and TUC leaders. As Bell details, during the decisive 1920-21 period several solidarity actions in support of the Irish struggle were taken by British trade unionists. In March 1920, the 200 delegates at the Rank and File Convention of militant trade unionists called for Irish independence and withdrawal of British troops. The following month around 2,000 dockers and 300 coal heavers at Liverpool docks went on strike in support of Irish prisoners incarcerated in Wormwood Scrubs.

Most significantly, in May members of the National Union of Railwaymen (NUR) at North Wall in Dublin refused to handle munitions for the British Army and were sacked. Outrage spread quickly among trade unionists and the calls for solidarity strikes became so loud that the TUC convened a special conference in July to discuss ‘the application of direct action to Ireland’. At the conference the NUR, led by its general secretary and right-wing Labour MP J.H. Thomas, called for an end to war in Ireland and for it to be granted ‘Dominion’ status within the British Empire. Opposing this, the Miners’ Federation called for the withdrawal of all British troops, for the ‘cessation of the production of munitions of war destined to be used against Ireland and Russia’, and for ‘a general “down tools” policy’ if the government refused. In a classic TUC fudge, both resolutions were passed, and, as Bell records, when Thomas was asked by a delegate when the unions would take the action they had voted for he replied ‘wait and see’. In fact, Ireland was never again debated at a TUC conference.

But the desire for action in support of Irish self-determination did not evaporate. In August 1920 the Labour Party and the TUC had formed a ‘Council of Action’ to ensure their leadership of the rising tide of militancy against British military support for Poland’s war against Soviet Russia. Around 350 local councils of action were set up to take action against the possibility of war and, as the threat of anti-Soviet war passed, many of them turned their attention to Ireland. Significantly, Bell has discovered that 78 of them called for the national Council of Action to demand British withdrawal from Ireland and to ‘down tools’ if the demand wasn’t met. Needless to say, the Labourite leadership of the Council of Action simply ignored the issue and quietly dismantled the network.

It was in response to this upsurge in support for Ireland and opposition to British imperialism that in June 1920 the Labour Party conference voted to support the ‘absolute and free self-determination of Ireland’. Although this appeared to be a radical shift away from the party’s traditional pro-imperialist stance – in 1918 ‘Labour and the New Social Order’, one of the founding documents of the newly reorganised party, had called for ‘Home Rule for All’ and a ‘Britannic Alliance’ of nations within the British Empire – it did nothing more than draw the sting from the calls of Labour Party members for action to force withdrawal from Ireland.

Indeed, the ink was barely dry on the resolution when Labour’s executive called a special conference for December 1920 to discuss Ireland, along with the worsening unemployment situation. With no debate, this conference reversed the demand for ‘free and absolute self-determination’ and called instead for an Irish constituent assembly to decide on the future of Ireland, with the proviso that the new constitution ‘should prevent Ireland from becoming a military or naval menace to Great Britain’. In other words, the Irish could control their destiny so long as the British agreed with them. It was a programme, remarked the New Statesman, ‘practically identical to the new Liberal policy’.

Despite these efforts to defeat trade unionists’ attempts to stand against British imperialism in Ireland, the issue would not go away. In January 1921 miners at Giffnock Pit, just south of Glasgow, staged a 24 hour strike against ‘British terrorism in Ireland’ and for ‘the withdrawal of all British forces’. One month later Black and Tans assassinated three railway workers in Mallow, County Cork. Two were members of the other railworkers’ union, ASLEF, and the union’s executive demanded an inquiry into the murders, threatening to strike if the government did not comply. ASLEF branches across Britain backed the executive’s call for action. However, once again, the leadership of the Labour Party intervened to head off potential action. Thomas and the NUR refused to support ASLEF, calling instead for parliament to discuss the matter, deliberately dividing the rail unions. Scrambling to outflank the militant ASLEF workers, the Labour Party executive and the TUC’s parliamentary committee (then its leading body) met on successive days to oppose strike action. Isolated and undermined, ASLEF dropped its threat and no inquiry ever took place.

As these examples demonstrate, sections of the British working class were prepared to take action in opposition to British imperialism in Ireland, but these impulses were diverted and sabotaged by the Labour Party and TUC leadership. Although Hesitant Comrades suggests that ‘both the LP and the TUC, while critical of the British government policy in Ireland in these years, were reluctant allies of the Republicans’, the actions of the Labour leaders as described in the book tell us more about their practical politics than the platitudes of their conference speeches and resolutions.

The book also discusses the organisations to the left of the Labour Party, who were to a large extent unable to break its gravitational pull. The British Socialist Party, effectively the forerunner of the Communist Party of Great Britain (CPGB), ‘understood’ the Easter Rising but thought it ‘foolish, and like every such rising … doomed’. At the same time, Sylvia Pankhurst’s leftward-moving Workers’ Suffrage Federation printed Patricia Lynch’s eye-witness reports of from Dublin but a few weeks later published an article from Sir Francis Vane, a British officer who had helped lead the crushing of the Rising who ‘regretted’ British atrocities. The Easter Rising was conspicuous by its absence from the Socialist Labour Party’s newspaper in 1916.

These attitudes were carried over when most of the British far left united to form the CPGB. Its founding conference in the summer of 1920 did not even discuss Ireland, despite the British escalation of the war in July 1920. To a large extent, the new party continued the passive handwringing of the British Socialist Party that bemoaned the failure of the workers to rise spontaneously in support of Irish self-determination. As Bell points out, it was only after the second congress of the Third International, where both Lenin and Radek had criticised the CPGB’s lack of activity on Ireland, that the party started to take the issue seriously.

Despite the depth of its research, Hesitant Comrades is not without its weaknesses. It unfortunately repeats the canard that Trotsky dismissed the Easter Rising as a putsch, a position that was actually held by Radek. Trotsky in contrast saluted ‘the heroic defenders of the Dublin barricades’ and in May 1916 characterised the Easter Rising as ‘the offspring of the movement in whose history the [Paris] Commune is indelibly inscribed’. The book is also somewhat dismissive of the efforts of British and Irish communists to chart a path from the struggle against British imperialism to the conquest of power by the working class.

However, the great wealth of detailed research and exhaustive use of labour movement archives means that Hesitant Comrades provides the most complete history so far of the British labour movement’s attitudes towards Ireland in the first quarter of the twentieth century. It is essential reading not only for the historian but all those seeking to understand to role that the Labour Party and the trade union leadership have played in maintaining Britain’s grip over Ireland.