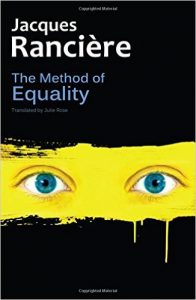 Jacques Rancière
The Method of Equality: Interviews with Laurent Jeanpierre and Dork Zabunyan

Among the challenges facing English-speaking readers of Rancière, especially those of us born in the era of Mulroney, Thatcher, and Reagan, is appreciating the political commitments of a work that so forcefully intervenes against a solidly organised and academically entrenched left. For those whose work is to build and understand the roots of a commitment too often derided and maligned by academic institutions that continue to speak in the register of Cold War posturing and liberal-democratic triumphalism, Rancière’s flippant and at times sweeping dismissal of ‘Marxism’ and its project of metapolitical demystification’ can be difficult to stomach. If one adds to this his ready reception by an Anglophone artworld that is comfortably tied to gentrification and to the displacing of working class communities, it is not hard to understand why many discount the work of this thinker, whose office in the Parisian suburb of Saint-Denis was for decades at the corner of Lénine and Stalingrad avenues. What Rose’s translation of this long-form interview offers English-speakers is a first look at how Rancière might himself understand his overall project, how he accounts for it in a setting removed from his reception in the English-speaking world, and how these might be used to push back on some of the common interpretations of his texts.

The foremost strength of The Method of Equality is its immersive quality. It works to submerge the reader into the world of commitments that, although mobilized over the whole of Rancière’s work, are not always clear in his essayistic writings. For first-time readers of Rancière, as much as for the well versed, Jeanpierre and Zabunyan’s interview clearly fleshes out the place and work of Rancière’s thought, its academic interventions and political commitments, and locates it in the particular scene from which it emerged.

In their brief foreword, the interviewers succinctly set out their aims in conducting the interview: (1) to take up the origin and function of concepts too often taken as shibboleths by his readers; and (2) to flesh out the unity of a project that is frequently and misleadingly split into distinct political and aesthetic moments (viii). The text itself is laid out as four cumulative interventions: the first seeks to gauge the larger aims of Rancière’s project in the problems he engages with in Proletarian Nights (Rancière 2012), problems which themselves emerge from his education; the second attempts to seize onto his theoretical style as something that spans his body of work; the third draws out the connections and distinctions between Rancière’s thought and that of his contemporaries (in particular: Alain Badiou, Michel Foucault, and Gilles Deleuze); finally, the fourth asks what are the possibilities for emancipatory struggles today (viii-ix). Beyond its formal structure, The Method of Equality engages with a number of themes that readers of The Marx & Philosophy Review of Books might find fruitful, notably: the problem of the relations of space, place, and history in Rancière’s thinking; the possibility of political organization in his autodidactic method; the historical quality to the tension he sets out between the logics opposed in politics; and the need he suggests for a new international in rallying concrete forms of resistance.

Long-time readers of Rancière will not be surprised to find that in the interview, he continues to adopt the register that has supported readings of him that present him foremost as a critic of an obfuscating demystification. Those philosophers and social scientists who denounce illusion continue to be cast as counting themselves on the side of lucidity (101). What is interesting, however, is the way Rancière ties this to an interest of his in the seizing up of the machine of systematic thought, arguing that it is essential, for him, that theory seize up so that the work it claims to do can be measured against something it cannot absorb (53). And while he counts Baudrillard as the foremost example of a thinking that avoids the resistance of its object by absorbing it, he also includes those who denounced the aimlessness of the general strikers in 1995 by invoking the thought of Marx and Arendt (151), along with those who liquidated the import of revolution, together with Marxism, in proffering that either had passed their sell by date (173). The sense that emerges from Rancière’s engagement with demystification in The Method of Equality is one that lends itself much more readily to a failure of demystification to live up to its political and emancipatory promise than any sense of it being a wrong in and of itself. In this way, while he criticises those who in invoking the economic sphere lay claim to a knowledge of final causes, he is quick to add that the merger of state and economic domination today makes the economic an inseparable component in any assertion of capacity (179-80).

This location of his interventions in a given place and history is also drawn out in his answers as to how he understands the relation of the problem of organizing to his autodidactic method. Asked if his ‘method of equality’ might simply reap at a collective level what it brushes over in individual or subjective moments, Rancière instead argues that the weakness of his thinking is the reverse, that following Foucault and Deleuze, ‘working on yourself is fundamental to any approach to equality’ (118). But overemphasising this, he notes, is something that worries him. More than anything, he maintains that the work of emancipation needs to understand the production of space. Throughout The Method of Equality, he talks about this in terms of the ‘burglary’ necessary to determine the common grounds of thinking. With Althusser, he claims, class struggle is always in theory, in struggling with the adversary’s words (34), and in illustrating a struggle that takes its force from elsewhere; with the method of equality, however, it is a matter of setting up the scene of an encounter where everything is always already at play (68). Contrary to any sense of what he deems ‘spontaneity v. organization clap trap’ (123), Rancière’s method is one of encountering an exceptionality that shatters any sense of someone’s account simply being the expression of what was previously hidden underneath, and revealed by an exterior force (110). An immersive approach to emancipatory politics, for him, is one that merely describes a reconfiguration of the given that is already at work, and which does so in a way that sets out that ‘the rest is up to you’ (90).

Weakening the sense of theory’s role in animating working class struggle, however, leaves much of the commitment implied in his ‘scenes’ to their place in a given history, a strategy that become more tenuous where he shifts to engaging with the problem of politics itself. As with his other works, in The Method of Equality, Rancière sets out his sense of politics in a tension between two logics working in a common space (52, 122). And while he does tie this account of politics to the experience of the 1995 general strikes (151), the conflict or contradiction between logics, for him, is ultimately one that only tacitly draws on history in animating its divisions. This produces something of a short-circuit when it comes to navigating the tolerance or intolerance that he admits is alternatively lived in immersive methods (144), as it leaves out any consideration of how tolerance and openness to emancipatory experience might be produced in a more demonstrative account of history. Reluctant to cast his own thinking about politics in terms of political philosophy, Rancière discounts the need for his thought to either build or draw on any sense of a philosophical tradition, excepting perhaps that of a historical-philosophical emancipation (50), a qualification that quickly returns to the quandary of the place or not of history in his thinking of politics.

Interestingly, when the interviewers take him out of the minutiae of his account of politics, as it appears in his work, and into an engagement with the possibilities for emancipatory struggles today, he offers that among the central challenges is countering the depoliticising effect of globalization. He accounts for this as an action taken by the dominant class in order to limit when people meet, and where it is that equality can meet inequality (113, 126). The situation, in his view, necessitates the creation of a new international (181). This new international would differ from actions such as those that took place at Genoa or Seattle which, by “attacking the organs of global governance wherever they periodically come together, and not where they produce their destructive effects”, remained essentially symbolic. Instead, it would do the work of first organizing local struggle (158). He argues that this would involve ‘a movement that, staring with effective social groups in a defined conjuncture of class struggle, is capable of constructing ways of universalizing situations. This relationship of the local to the capacity for universalization it enables is very important to me in defining the political’. He adds that ‘for me, it’s only by reconstituting social movements that can fight here and there in concrete forms of rallying against equally concrete enemies that we can hope to resurrect a true sense of the emancipation of humanity’ (159).

It is perhaps rather fitting, given Rancière’s fondness for paradox, that the view of his thought that emerges from a thematic reading of The Method of Equality is itself thoroughly steeped in paradox. And while the text emphasises Rancière’s commitments rather lucidly, along with the struggles internal to his thought, it does not ultimately leave the reader with anything like a lucid summations of the scene from which it emerges. Rather, The Method of Equality seems content to paint the scene in bold strokes, leaving it to the reader to establish whether the measure of the work is to be found in the marks of the painter’s certainty or in the subtlety of the spaces between them.