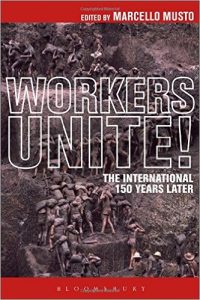 Notwithstanding their commemorative subtitles, the Marcello Musto edited Workers Unite! The International 150 Years Later is quite different from his Karl Marx’s Grundrisse: Foundations of the Critique of Political Economy 150 Years Later. Published in 2008, the latter is a collection of essays on the significance of Marx’s ‘Rough Draft’ by a series of contemporary scholars, including Arthur, Foster and Carver. In contrast, Workers Unite! is an anthology of excerpts from primary sources by various members of the International Working Men’s Association, including Marx, de Paepe and Bakunin. It provides an accessible sample of speeches, reports, addresses and propaganda issued by the General Council, Congresses, sections and delegates of the International. The selection of primary documents sheds light on the most significant debates within the IWMA, and Musto’s introduction attempts to situate these within the context of both the historical and theoretical development of the organization as a whole.

Part 1 contains excerpts from the Inaugural Address. Part 2 highlights resolutions adopted at the Geneva and Brussels Congresses ‒ the latter marking the demise of Proudhonism and turn toward ‘collectivism’ (see Document 3). As Musto elaborates, the mutualists held that ‘economic emancipation’ could be achieved by establishing a ‘People’s Bank’ which would lend credit at cost (19). Part 5 contains several excerpts from a mutualist report on credit, portions of which were written by the leader of the Proudhonist camp, Tolain (D25). He regarded such measures as sufficient to enable workers to build alternative structures of power outside of the apparatuses of the State. During the early years of the IWMA, the mutualists wielded their considerable weight in obstinately opposing ‘state intervention in any field’, the use of the ‘strike as a weapon’ and ‘socialization of the land’ (19-20).

The selections in Part 3 touch upon questions such as the length of the working-day and female labour. It also contains several documents on the effects of machinery upon the worker, including an interesting speech by Marx (D7), as well as reports by the anti-Bakuninist Eugene Steens (D8) and the mutualist convert to anarchism Pierre Fluse (D9). All three highlight the emancipatory potential of machinery, as well as its dehumanizing reality when concentrated in the hands of the capitalist. In a bourgeois economy, Marx argues, the introduction of machinery only serves to lengthen the working-day and depress wages, leaving the worker ‘physically deteriorated’; in a higher form of society, it would enable an increase in free-time for ‘mental culture’ (103). Freed from the confines of capitalism, Steens likewise suggests that machinery would ‘render life sweeter’ through a ‘constant diminishing of the hours of labour’, facilitating the ‘full emancipation of the worker’ (109).

Part 4 pertains to issues about the efficacy and significance of trade unions, with important pieces by Marx (D12), the anarchist Jean Louis Pindy (D17), as well as the syndicalist and communard Eugene Hins (D18). While cautioning against the reformism inherent in many unions, Marx characterizes these modes in the organized struggle against capital as ‘engender[ing] the material conditions and social forms necessary for an economical reconstruction of society’ (121). In a similar vein, we find Pindy referring to the IWMA as providing the outlines for the ‘commune of the future’, i.e., a ‘federation of free producers’ (133-4).

Another prominent name encountered for the first time in Part 4 is Cesar de Paepe, who, aside from Marx, arguably exerted the greatest influence over the theoretical development of the International (18). He appropriated mutualist ideas about credit (D23), but, as we learn subsequently in Parts 7 and 8, he also broke with them and the anarchists on the question of the State (D39, 45) and the collectivization of land (D33, 36). According to Musto, de Paepe, on account of this eclecticism, was initially able to play a ‘mediating role’ between Marx and the Proudhonists (42). Although he later joined the autonomist International, he opposed its abstentionism and advocated for a Lassallean Volksstaat (D41) against Bakunin (D78) and Guillaume (D40, 76). Also appearing in Part 7 is the Critique of Bakunin’s Politics, an excerpt from a text composed by Marx, Engels and Lafargue (D38). I suggest these documents be read alongside those in Part 13. This gives us a sample of reports and essays by Marx, Engels, Sorge, Guillaume and Bakunin which speak to this rift between the anarchists and communists over working-class parties, the State and the political emancipation of the proletariat.

Part 6 contains a short, but interesting, exchange between Marx and Bakunin on the abolition of the right of inheritance (D29-31). The will of the latter ultimately prevailed, making Marx’s report the ‘first report of the GC not approved at an IWMA Congress’ (162).

Parts 9 through 12 turn the reader’s attention toward the formation of an IWMA foreign policy. Parts 11 and 12 focus on the Irish and American questions, with the majority of the excerpts written by Marx. Part 9 contains selections from Marx’s The Civil War in France, and the documents in Part 10 give us an outline of the anti-war views entertained by key figures of the International. Although there is also a speech by the great turncoat of the Paris Commune, Tolain (D51), the most influential position was formulated by de Paepe (D49-50). As Musto notes, his views ‘became the classical position of the workers’ movement: that wars are inevitable in a capitalist system’ (18). Marx’s Addresses on the Franco-Prussian War are also highlighted in Part 10 of Workers Unite! (D54-55). After the Paris Commune, Marx’s ‘top priority’ in the IWMA was to ‘help the workers’ movement express an independent position, far from the nationalist rhetoric of the time’ (29). This is why, Musto suggests, he commended the leaders of the Social Democratic Workers Party (Liebknecht and Babel) for being the only two parliamentarians to vote against the war budget which funded the invasion of France (30).

At the end of Workers Unite!, I was left wondering just how well it satisfies one of its stated aims of being accessible to a non-academic audience. While Musto’s introduction provides a balanced historical synopsis, it does not provide an adequate account of the theoretical positions of the individuals behind the primary documents. Each of the excerpts contains a short biographical footnote on its author(s), but these, too, are often bereft of the relevant information required to allow non-scholarly readers to situate the debates between the various factions of the association within their appropriate theoretical context.

Notwithstanding this shortcoming, the value of the sourcebook is considerable for those interested in the philosophical development and historical practice of the IWMA. Of the 80 primary documents, 33 have never been published in English before (xvi). Both Musto’s otherwise erudite introduction, and his selection of excerpts, give us a glimpse into the life of the first International which ultimately challenges orthodox interpretations of the role which Marx played in shaping its outlook.

His introduction dispels the myth that the organization was as numerous, well-financed or influential as both its proponents and opponents claimed at the time (6-9). It also questions the still all-too commonplace assumption that the IWMA was ideologically cohesive, and that it was dominated by Marx either organizationally or theoretically (3-4, 6). Rather, Musto repeatedly emphasizes that it was a diffuse body, both philosophically and structurally (13, 19, 21). It was composed of British trade unionists, Owenites and reformers, Belgian syndicalists, French mutualists, Italians influenced by Mazzini and later Garibaldi, as well as Spanish and French anarchists led by Bakunin. Throughout all the phases of its development, the Marxist camp was arguably always in a minority. That he was able to ‘secure peaceful coexistence of all these currents’, and around a ‘programme so distant from the approaches with which each has started out’, was ‘Marx’s great accomplishment’ (4).

As such, Musto underscores that wherever consensus was forged on the social, political and economic questions of the day, it was, at times, due to Marx out-manoeuvering or convincing his opponents. More often, they came to acknowledge his foresight by the pure persuasion of events. Musto contends that such was the case with the decline of the mutualism. It was the ‘workers themselves’ who, ‘more forcefully than any theoretical discussion’, were ‘sidelining Proudhonian doctrines’. The ‘proliferation of strikes’ and self-organization of the workers ‘convinced the mutualists of the error of their conceptions’, especially on the ‘need to socialize the land and industry’ (20-21). From the Brussels to the Basel Congresses, he argues that these movements virtually ‘eradicated Proudhonism’ (23). Hence, on issues such as credit and land ownership, Marx eventually won the day. Quoting the words of Eccarius, Musto argues that, in these instances, Marx was just ‘the right man in the right place’ (5).

At other times, however, Musto stresses Marx’s strategic missteps, especially during the intrigues with the autonomist factions of the International. The ‘victory’ over abstentionism at the London Conference ‘proved to be ephemeral’ because Marx was unaware of the ‘grave repercussions’ he had set into motion (38). Thereafter, whenever consensus was formed among competing factions, it was often in direct opposition to him. Yet, according to Musto, even Marx’s organizational failures, like his successes, only hastened the force of events. Marx’s ‘miscalculation’, beginning with his support for Vailliant’s Blanquist Resolution IX in London, only ‘accelerated the crisis of the organization’ (41).

As a whole, Musto’s even-handed introduction, and his selection of primary documents, leaves us with an impression very different from the orthodox conception of the ideological make-up of the IWMA and the part Marx played in shaping it. Workers Unite! illustrates that Marx was not a rigid dogmatist whose ostensibly authoritarian personality stubbornly refused to bend on doctrinal principles. As Musto puts it, the ‘orthodox Soviet view of Marx’s role in the International’ would have us believe he ‘mechanically applied’ a political philosophy worked-out within the ‘confines of his study’ (6). On the contrary, Marx’s organizational experiences in the association ‒ especially with issues around national liberation, and the Paris Commune ‒ enriched his vision of socialism. But Musto is also right that those experiences did confirm something essential to some of his earliest political writings: if only the workers of the world would unite, they might cast off their chains.