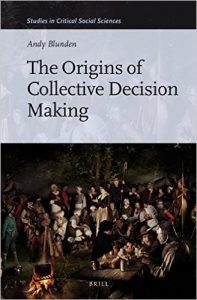 In this engaging and accessibly-written study, Andy Blunden seeks to uncover the history of how people have arrived at decisions on a shared course of action to achieve common goals. Along the way, he provides interesting and sometimes surprising case studies of collectivity in various social and institutional formations, drawn from three continents and a range of cultural practices.

Declaring his interest from the start, Blunden gives us glimpses into his personal history as an activist whose participation in different collective decision making processes in the labour movement and various Left organisations and alliances over the years has left him variously inspired, frustrated or simply bemused. Appropriately, his project is not only to inquire into the origins of collective decision, but also to draw lessons for future Left campaigning practice and especially to heal, or at least bridge, rifts based on prejudice or misconception that allow preferences as to method to become barriers to pursuing common cause.

Blunden situates his inquiry within the assumption that the social is basic – that “the individual is a product not a premise of social history and development”. That assumption usefully enables him to sidestep specious questions of how collective decision-making is possible, or justified, and to address directly the commonalities and differences among actual instances of collective decision-making. The framework he sets up for the reader, derived from his investigations, distinguishes collective decision making, in which the parties genuinely have, or assume, a shared goal or interest, from collaboration, where parties with different projects agree to join forces as a pragmatic means of each achieving their own goals. Instances of decision-making through negotiation, solidarity considerations or prudentially accepting a command are therefore excluded from the scope of this work. Although the author does not labour the point, this categorisation gives the reader some food for thought when Blunden briefly considers decision making in twenty-first century left activism towards the end of the book.

Setting aside collaboration leaves Blunden with a fourfold classification of collective decision-making: Majority, under which decisions are debated and voted upon; Consensus, under which a decision requires agreement from all parties; Counsel, where a decision-maker engages in genuine consultation with representatives or interested parties; and Sortition, the delegation of decision making to some non-personal process such as drawing lots. Here Blunden shows his cards somewhat: he discards the process of sortition as despair of a rational outcome such that “the decision is outsourced to God or luck”. Given that selection by lot is used to identify candidates for jury service, and that the current crisis in liberal democracies has sparked renewed interest in the possibility of selecting legislators by lot, this feels like something of a missed opportunity.

That said, it seems reasonable for Blunden to select the most historically prevalent forms of collective decision making and to focus his study on these. Consequently, and helpfully for the reader, the greater part of the book is taken up with two sections examining the heritage of, respectively, Majority and Consensus decision-making protocols. If some of the case studies threaten to put some strain on the boundaries of Blunden’s chosen paradigms, this does not make the book any less interesting or thought-provoking. The case studies themselves are genuinely intriguing, from mediaeval guilds and the emergence of trade unions in Britain to a sketch of twentieth century social movements and the internal dynamics of the Occupy protests.

Majority is traced through some well-trodden paths – the formation of guilds as a voluntaristic social infrastructure replacing the weakened obligations and crumbling institutions of feudal society; the structures of the Methodist church; the Chartists; and trade unions in both their particularist, exclusive and universal, politicised guises. Along the way, however, Blunden also makes interesting diversions into the Oxford and Cambridge university communities, early Communist organisation and even the Hanseatic League mercantile alliance. This broad picture of the origins and evolution of the Majority protocol allows him to bring out the connections between majority decision-making and equality: that the very concept assumes the equality of those taking part in the decision, and that moves to politicise the principle of Majority and extend it beyond closed groups have met with resistance from entrenched minority power groups. Here, it seems that Blunden may be eliding tensions between the practice of Majority and the ideology of majoritarianism, but the point is nonetheless well made.

The section of the book dealing with Consensus similarly draws on both familiar examples and less well-documented instances of the practice. Returning to consideration of the English Civil War, Blunden gives us an overview of the self-organisation of radical communities both within the New Model Army and beyond, situating the first formalisation of Consensus in recommendations for the conduct of Quaker meetings in seventeenth century England and showing continuity with Quaker communities in modern Pennsylvania. But Blunden also shows the richness and diversity of Consensus’s heritage and practice: from African social formations, through town meetings in early New England and Black churches under slavery, to the social movements of the late twentieth century. He also makes a brief diversion to consider some specific examples of decision-making within anarchist groupings, seemingly in order to defuse any suggestion that anarchist movements can lay claim to be the originators of modern Consensus.

It is clear throughout the book that Blunden’s taxonomy must acknowledge hybrid uses of its decision types. Majority practices sometimes pre-process questions through Consensus processes, whether these explicit and acknowledged or simply a manifestation of shared culture and assumptions. Similarly, Blunden does not scruple to point out instances where what is taken to be a Consensus process in fact embraces elements of Majority decision-making. And hovering in the background is the question of whether both Majority and Consensus processes effectively collapse into Counsel in the presence of particularly influential group members or cabals. It is apparent that the coexistence and relative importance of differing practices is often a reflection of power relations within the relevant decision group, but Blunden does not explore this in any detail; nor does he press the interesting question of whether the credibility of either Majority or Consensus in a particular context can survive the surfacing and acknowledgement of de facto material or cultural inequalities among group members.

Any book that seeks to cover so much ground is inevitably bound to give more space to some of its examples than others, so it is perhaps over-scrupulous to complain that the less familiar case studies feel rather lightly sketched; nonetheless, an endnote signposting the interested reader to further sources for these interesting examples would have been welcome. And the final part of the book, looking very briefly at the emergence and status of new movements and “alliance politics”, is really little more than an epilogue. It is unclear how Blunden views these phenomena – whether as mere voices of protest, as he appears to suggest of Occupy, or whether as the germ of a whole new politics. Whichever, in the wake of the Brexit vote and the Trump presidential victory, and in the context of allegedly ‘post-truth politics’, this is a valuable and serious look at what it means to reach genuinely collective decisions – albeit one that, at the current price tag, is more likely to receive attention in the academy than at the front line of activism that is its subject.