Marx & Philosophy Review of BooksReviews‘Jacques Lacan, Past and Present: A Dialogue’ reviewed by Sinan Richards 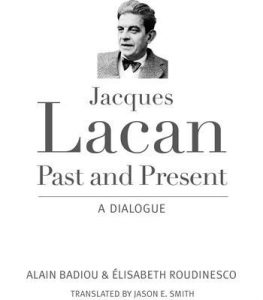 Alain Badiou and Élisabeth Roudinesco
Jacques Lacan, Past and Present: A Dialogue

Sinan Richards is a DPhil Candidate at Wadham College, Oxford. He works on contemporary French …

To put it in a slightly cavalier way, the neuroses are ultimately a matter for clinical psychology. Everyone knows these little stories of failures in love, disturbing obsessions, latent impotencies, these stories that are so terribly identical and boring. I have always admired the fact that psychoanalysts could spend their lives, day in, day out, listening to these symptomatic confessions. It is in fact a form of heroism (12-3).

Alain Badiou is indeed cavalier and honest in this short book, which is a dialogue between him and the French historian of psychoanalysis Elisabeth Roudinesco. Both intellectuals offer many intriguing insights into Jacques Lacan’s personality and thought. However, with a few exceptions, this book is not much more than an introductory romp into the intellectual environs and theoretical reception of Lacan’s psychoanalysis. Nevertheless, it does offer a few interesting titbits, even for well versed readers. The book’s main thrust is a defence of Lacan and psychoanalysis, even from its own self-domestication, as Roudinesco puts it (65). Badiou raises the stakes further by intimating that the very survival of psychoanalysis is in question:

[T]he contemporary charges against psychoanalysis seem to me [..] still more grave than those levelled at Marxism. Marxism presupposes and implies a fight! What is happening today with psychoanalysis is much more dangerous – we must be on high alert. Because wanting to eradicate Freud or Lacan is to go after the very concept of the modern subject. And if that is abolished, the door is open to reactionary ideologies of the worst sort (67).

At a relatively early point in the dialogue, Badiou seizes on the description of Lacan as the ‘Lenin of psychoanalysis’ (20), arguing that Lacan builds on Freud in the same way that Lenin built on Marx. Badiou says:

Lacan compared himself to Lenin while comparing Freud to Marx. With these more or less metaphorical associations, he wanted to emphasise that Freud was still situated in the medical logic of the cure, and Marx in the posture of a promise. Now, Lenin no longer promises communism: he decides, he acts, he organises’ (20).

Badiou shows that in many ways Lacan’s works is not ipso facto political, but rather that it emerges from grounds that are in-themselves extremely political. Lacan decides, acts and organises, but what the Lacanian cure offers is not comparable to the medical logic of the Freudian cure. Of course, this comes as no surprise to those well versed in Lacan’s thought. However, the political context of the Lacanian cure is essential for Badiou’s characterisation of Lacan: ‘the Lacanian cure, even though it is totally apolitical in its own specific exercise, proposes for thought a political matrix all the same’ (20). Badiou’s Lacan is a Leninist in so far as he manipulates the political context to achieve not what Freud had desired in the cure, but rather a cure that uncovers the ‘profound sense […] which aims at […] an opening up of the subject in relation to an original state of powerlessness’ (20). Badiou’s reading of Lacan, though perhaps faithful to Lacan’s own view of himself, runs contrary to contemporary debates which attempt to place Lacan directly in line with Marx – rendering Lacan as not ‘totally apolitical’ as Badiou would have it. For example, Samo Tomšič argues in Psychoanalysis, Capitalism, and the Critique of Political Economy that ‘Lacan’s use of formalization stands in direct continuity with Marx’s dialectical method’ (Tomšič, 156).

It is in relation to subjectivity that Badiou recounts his sympathetic reception of Lacan’s work on his own thinking at the start of his career. Badiou explains how, in the early sixties, he was at ‘a particular conjuncture,’ and that although he was a committed Sartrean, he was inculcated (‘with the help of Althusser’) into breaking with phenomenology (7). Badiou’s desire was to maintain the concept of the subject in his philosophy, unlike ‘the “hard” structuralists like Foucault or the Heideggerians such as Derrida, who consider the category of the subject to be the mere avatar of a defunct metaphysics’ (9). For Badiou, Lacan wants to preserve the subject, and ‘renew it from the ground up’ (9). Of course the Lacanian subject is no longer recognisable, as Badiou explains: ‘[it] is certainly subjugated to the signifying chain; it is divided, unbeknownst to itself, split, exposed to a radical alterity’ (9). But it is this early gesture, that of preserving the subject, that Badiou claims drew him towards Lacan; ‘Lacan allowed me to align myself with the theoretical antihumanism of the period while remaining faithful to my Sartrean youth and to the notion of the subject’ (9).

Flitting back and forth throughout Lacan’s career, both authors suggest that the Lacanian cure is something that Lacan offers and then slowly begins to take away, which they both stress is unprecedented in the history of French thought. Roudinesco argues, and Badiou agrees, that ‘it was fascinating to see this man undoing his own thought in public’ (51). Lacan’s final gesture, the dissolution was, for Roudinesco, a ‘gesture [that] is unheard of, deeply sub­versive, like final provocation, final blow levelled at his supposed theoretical omnipotence’ (51). For Badiou, the enigma that Lacan presents in his later seminars could ‘be represented with the characteristics of Oedipus at Colonus.’ He continues: ‘a situation where a man undoes by himself the knot of his own existence and imposes on whoever listens to him this terminal, final unravelling’ (53). There is a clear sense from both Badiou and Roudinesco that the theatricality in Lacan’s seminars, his obvious attempts to formulate his theory in incremental yearly steps, was something that he intended to continue until his death. Roudinesco agrees: ‘at the end of his life, Lacan transformed into Oedipus at Colonus even physically, in his walk and his gestures. He was engaged in a gigantic process of dissolution.’ Badiou says that ‘this posture is, to be sure, in certain ways obscure, spectral. But it reveals and condenses the tragedy itself of the subject’ (53). Lacan’s project is very fruitful for philosophy, Badiou argues: ‘we will never finish interrogating this man and his thought. What was it about really, at bottom? Psychoanalysis? Obviously. Philosophy? Yes, in a certain sense’ (54). The idea that Lacan volunteered the undoing of his own thought is relatively commonplace. Slavoj Žižek’s Less than Nothing explains that Lacan had formulated a certain deadlock in his very late seminars. The Borromean knot demonstrates Lacan’s inability to fully close the circle of his arguments: ‘here Lacan, at the very end of his teaching, reached a deadlock to which, in an authentically tragic mode, he openly confessed’ an admission of total defeat (Žižek, 798-9). In the unpublished seminar Le Séminaire, Livres XXVI: La topologie et le temps, Lacan says: ‘It is evident that I was wrong, but I simply let myself slide into it. This is disturbing, it is even more than annoying. It is even more annoying that it is not justified. This is how things look to me today, and this is what I confess to you. All right!’ (Lacan in Žižek, 799).

What we learn from Badiou and Roudinesco is no elaboration of how or why this tragic moment occurs in Lacan’s teaching, neither in technical nor in more general terms. We get entertaining slogans which invite questions and spark ones’ curiosity. Badiou says:

I imagine the late Lacan as someone who continues to point his finger at an unsayable real. Except that, in the end, we can no longer know what this gesture indicates and truly implies. It is left to us as an enigma, like death itself’ (55).

The elucidation of Lacan’s thought is achieved, with great accuracy, by both authors elsewhere. Here, however, we are simply left to enjoy the ruminations of the two towering figures of the French contemporary intellectual scene. Badiou explains his affinity with Maoism – ‘today, we can only say that Mao was part of a great revolutionary history, just like Robespierre, Saint- Just, Blanqui, Trotsky, Lenin, and many others’ – but he disagrees with Roudinesco’s view that Lacan’s thought has a propensity to proliferate revolutionary history:

[I]t stems in fact from the Lacanian concept of the subject, to which it is completely coherent if not necessary to give, via philosophy, a subversive political dimension. The passage from a Lacan who says, “do not give up on your desire,” to a Mao who says, “you are right to rebel,” was for us perfectly clear (25).

However, in this book, we never move beyond the statements or slogans – which was perhaps the ‘heroic’ aim of the project from the very start.