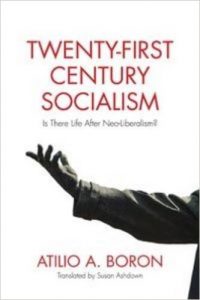 Atilio Borón
Twenty-First Century Socialism: Is There Life after Neoliberalism?

Rudy Leal McCormack is a Masters Student at Florida International University in Miami, Florida. His …

Atilio Borón is an Argentinian professor of political theory at the University of Buenos Aires. Twenty-First Century Socialism: Is There Life After Neoliberalism? was published in Spanish in Buenos Aires at the end of 2008. Afterwards, Susan Ashdown translated the version under review into English. The intent behind this critical analysis is no secret. Borón has a personal story of the Washington consensus, for the reason that Argentina his native country felt the full force of neoliberalism’s influence. Latin American Countries (LAC), as Borón contends, have become the exploited subjects of capitalism for the benefit of a few powerful nations.

In the first paragraph of the introduction, Borón succinctly defines the main idea: that capitalism is not a universally applicable model nor is it an eternal answer for prosperity and growth in LACs. Borón’s useful invoking of the ideas of Immanuel Wallerstein, in addition to Marx and Engels, conveys that the global construction of capitalism as a world economy has a center (the United States, Western Europe, etc.) that sets the rules for the exploitation of the periphery and develops itself by appropriating surplus value from the periphery (Latin America, Caribbean, Africa, etc.). As a result, Borón prescribes a twenty-first century socialist solution, an alternative possibility where nations, especially LACs, can develop through democratic means.

Borón’s book is divided into three main chapters. The initial chapter tackles the constructed narrative of capitalist development by the neoliberal ideological long victory in the ‘battle of ideas.’ This simply means the ideological global grip of capitalism as a hegemonic model over alternative systems. The second chapter traces the history of capitalism in LACs and Borón identifies a roadmap in finding a different direction within capitalism from the Washington consensus. The final chapter supports Borón’s ultimate purpose of the book, a refined definition of the socialist horizon.

In the first chapter, Borón deconstructs in detail the myth sold to the rest of the world. This myth robs LACs of a bright capitalist future that never comes to fruition. Borón calls them the ‘eternal countries of the future’ (25). Put simply, the capitalist myth is a story inculcated within LACs designed to keep them in a perpetual state of economic and political dependency by advanced capitalist interests. In fact, this metaphorical treadmill of illusory economic growth plays into the mythology of capitalism by the core countries. This ongoing myth has demonstrated how effective neoliberalism’s ideological grip has been in LACs and through globalization.

Further, Borón suggests, in a world of transnationalized markets that include pressures of globalization, it is fictional to believe LACs can depend on their own national capital development. For example, between 1870 and 1930 Argentina lost its ‘national bourgeoisie’ (29) made up of agrarian landholders. The national bourgeoisie, various and stratified proved to be weak in waging a struggle against imperialism and transnational businesses. The foreign takeover of LACs such as Argentina, Brazil, and Mexico share a pattern of underdevelopment identified by Borón, which aggravates the mythology of capitalism for LACs.

This first and crucial chapter shapes the overwhelming challenges for LACs in a neoliberal world order. For example, Borón describes the international apparatuses that give such an advantage to the core nations in the international realm made up of ‘free’ trade agreements, the Washington consensus, the World Bank, and the International Monetary Fund. Essentially, these same tools act as proxies for the United States Department of the Treasury, which maintain the imperial world order and its grasp on LACs. The result, as Borón labors to demonstrate is that capitalism is unsustainable due to its destructive social forces.

The second chapter directs our attention towards capitalism’s historical development. In a show of dramatic urgency Borón considers capitalism – rightly – to be ‘a slow social holocaust’(40), ‘a sacrifice brought about by the unprecedented intensification of the predatory characteristic of a particular mode of production which conceives of men and women and nature as mere commodities to be bought and sold in the marketplace for a profit’ (ibid). However, the ‘Golden Age’ (41) for capitalism, the period from 1948 to 1973, became a model of unprecedented economic prosperity for many core countries that set a precedent for a long time. The ‘Keynesian welfare state’ as economists called it gave rise to the best capitalism could offer. However, financial institutions with the help of deregulation by top state administrators in the United States perverted that model and capitalism fell back on its hard-core primal instinct: ‘the maximization of profit at whatever price.’ (43). Neoliberalism, this perverse transformation, became the model that is leading society and the environment toward an accelerated path to destruction.

Moreover, the latter part of the second chapter concentrates on visionary alternatives of a life after neoliberalism. Thus, Borón outlines policy initiatives LACs governments can adopt to abandon the Washington consensus. There are in total eight fundamental proposals Borón references, and these are by no means complete. Rather, the initiatives are an attempt to solve selected issues to mitigate the crisis of neoliberalism in LACs.

In Borón’s assessment, the reconstruction of the State is imperative for any form of change to take place. This means, the reconstruction of the state should be rebuilt on non-capitalist premises recognizing, and fostering the interest and organization of the popular social classes. For the same reason, effectively regulating markets in the form of the Tobin tax: ‘a tax of just 0.5% on transaction effected on international monetary exchanges – through which, according to conservative estimates, some $2 trillion circulates daily’ (60) is a practical response to the shortcomings of neoliberalism. A different example is fighting poverty instead of blaming the poor. This entails elaborating and implementing an incomes policy with universal characteristics that reinvigorates living standards for a large sector of Latin American society. Filled with pragmatic solutions and effective guidelines the roadmap demonstrates a blueprint of a post-neoliberal society.

In the third chapter, Borón proceeds with a general discussion of the types of socialism suitable for LACs. The framework Borón uses is the socialist ‘tripartite perspective’ that concentrates on three characteristics: core values, a program for the project, and finally the subjects of a post-neoliberal world. The most crucial component of a new socialist project entails principles and values that define a renewed socialist society. This signals the creation of a new man and woman, a new culture characterized by the abolition of all matters of oppression and exploitation, the dominance of solidarity, the end of separation between rulers and the ruled, and the reconciliation of humans with nature. How will this be accomplished? Simply put, we learn and build from past socialist mistakes. That is, through the predominance of use value over exchange value, a creation of a new non-predatory relationship with nature (what does it look like?), the democratization of all spheres of social life, and the principle of ‘multiculturalism’ (i.e., the reciprocal enrichment of all cultures through a permanent dialogue) (81).

Next, the program involves a socialist project that is open to alternative approaches to achieving socialism, and is dependent on the concrete historical condition of each LAC. Borón states, ‘there stand no single template or one ideal model’ (92).The old model of total state takeover of the economy was a necessity imposed by extreme historical circumstances, that does not mean it should be the only form of a socialist project. Ultimately, socialism is always a work in progress adapting to the historical factors of our present time.

Lastly, the static term of strict class distinction is not the objective for the subjects of this project. Instead, a comprehensive picture of unified social forces oppressed and exploited by capitalism becomes the goal. The construction of a subject requires recognition, recognizing that a plurality of various subjects exists (i.e., gender, race, ethnicity, social class, etc.) is an important and initial step for a renewed socialism. These new social and political actors are not illusions, they are an expression of new contradictions generated by the complex nature of capitalist society.

As a word of caution, LACs are the focus of Borón’s twenty-first century socialism. Socialism is inherently an international struggle for human emancipation; therefore, all countries and subjects should participate in a global struggle for a renewed socialism. Much of Borón’s roadmap concentrates on particulars specific to LACs. Socialism exhibits ubiquitous values as a project, which means, including those countries that benefit the most from the neoliberal model. Marx understood socialism must also appear in the most technologically advanced countries, such as the United States and Britain in order to speed up the transition to a post-capitalist world. In addition, we also recognize that transnational financial institutions have unhinged themselves from state rule and now serve a transnational capitalist class. It seems like a partial bandage in Borón’s case in only concentrating on LACs when the bigger menace of a globalized capitalist system remains concentrated in the hands of a stateless privileged few.

Ultimately, Borón determines that present-day Marxism has to prove that alternatives to neoliberal capitalism exist, and that these alternatives can be useful as ‘guides to action’. Borón wittingly uses a prison break analogy demonstrating that in order to escape capitalism one must imagine a strategy and exit point for escape. Borón adamantly doubles down that in LACs there is no other sustainable response, a revised socialism for the twenty-first century is the answer. The alternative – more capitalism – will doom human existence. Borón is hopeful that a socialist project worthy of its name will come around, sooner rather than later. However, reality can create a cynic out of the most hopeful of us all. Nevertheless, hope is what we must hold on to because the alternative is disaster under the current destructive neoliberal model.