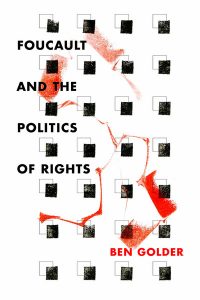 Ben Golder
Foucault and the Politics of Rights

Jack Blaiklock is studying for an MA in Continental Philosophy at Warwick University. …

To what extent can and should rights be deployed to accomplish political goals? Can rights play a role in a critique of existing power relations? Or will they tend to reinforce those relations? Must appeals to rights be understood as based on some stable ground such as our shared humanity? Or is it possible to understand rights differently? These are some of the questions addressed in Ben Golder’s lucidly written and persuasively argued book. Golder’s main purpose in Foucault and the Politics of Rights is to vindicate Foucault’s use of rights in his later works. He contests interpretations that see Foucault’s appeals to rights as a recantation of his earlier critiques of subjectivity in favour of a liberal individualism grounded in an essentialist notion of the subject. Against this disjunctive reading of Foucault, Golder emphasises the continuity between Foucault’s critiques of sovereignty and the subject in the years leading up to the mid 1970s and his appeals to rights from the late 1970s on.

The attempt to read Foucault in this way faces several apparent difficulties (of which Golder is aware). In the first place, appeals to rights are often taken to require grounding in some stable fact about subjectivity, for example, an essentialist notion of our shared humanity. Foucault’s critique of subjectivity in his earlier works is based on the idea that subjectivity has no stable essence. In uncovering the contingent history of the modern subject, and in demonstrating the discontinuity and instability of this history, Foucault takes himself to show that subjectivity is not something static and pre-existing, but rather the result of a particular fabrication (44). Such an understanding of subjectivity offers no obvious ground for appeals to rights. Any attempt to square Foucault’s early critique of subjectivity with his later appeals to rights must thus explain how such appeals are possible, if they are not so grounded. In the second place, in his early work, Foucault suggests that confronting sovereign power in terms of rights serves to legitimate and reinforce the opposing rights claimed by the sovereign (93). Using rights to delimit an area in which sovereign power cannot operate legitimately, implicitly recognises the legitimacy of the use of sovereign power outside of these limits. Appeals to rights look like they may result in temporary gain at the price of ultimately entrenching sovereign power. Golder attempts to navigate these difficulties by reading Foucault as constructing a “critical counter-conduct” of rights, using rights tactically and strategically against liberal consensus conceptions of power and subject.

Golder begins with a discussion of Foucault’s understanding of critique. Golder argues that the aim of Foucault’s genealogical method is not to force a repudiation or demonstrate the falsity of the object of critique, “but rather [to] destabilize that object and lay it open to the possibility of being otherwise” (50). The concept of rights, for example, is not definitively rejected, but shown to be historically contingent and so mutable. In this context, it becomes possible to read the later appeals to rights as critical counter-conducts, a term Golder borrows from Foucault’s analysis of Christian pastoral power in his 1978 Collège de France lectures. Golder’s point is that once a notion has been recognised as open to change it becomes possible to attempt to effect such a change, to lead the discourse of rights in new directions and employ it for new ends. Foucault’s turn to rights is not then a recursion to a notion previously rejected. It is consistent with his earlier critique.

Nor does the appeal to rights represent a revision of Foucault’s analyses of subjectivity. Golder shows that when Foucault appeals to rights, these rights are not grounded in an essentialist notion of humanity. To claim a right is, for Foucault, to make a shared attempt to create a different way of living, a different way of being. Far from being necessary to ground claims to rights, essentialist notions of humanity thus turn out to be “fatal” for such claims (81), because they deny the possibility of change in the nature of humanity that such claims require. In this context, Golder turns to Foucault’s rights claims in his writings on the Iranian revolt and his address to the United Nations in Geneva. Golder argues that these interventions should be understood as grounded in nothing other than the very practice of claiming (79) and so in the collective attempt to make the claimed rights obtain.

Golder is clear that Foucault’s turn to rights is not uncritical. Foucault remains aware of the ambivalence of rights: “rights are simultaneously vehicles for political claiming and sites of regulatory control” (92). This is for two main reasons. Firstly, as already mentioned, the very act of claiming rights against sovereign power can serve to reinforce that power by implicitly recognising its rights. Secondly, although rights claims may be one means of creating new forms of subjectivity and new identities, they also risk entrenching the identities they help create: “For all their utility as juridical guarantees of a particular way of life, rights actually function to produce, delimit, and circumscribe that very way of life” (105). If there are rights that accrue in virtue of being a subject of a certain sort (a woman, a homosexual, a human) then to claim such a right we will need to be recognised as a subject of that particular sort, living that particular way of life.

Foucault’s awareness of the ambivalence of rights leads him to use rights in a way that Golder characterises as strategic. Foucault tries “to deploy rights not just in a localized, occasional, and tactical way, but rather as connected to a broader and concerted strategic engagement with modes of power and punishment” (146). Golder demonstrates this by showing that Foucault’s use of rights is selective: he forgoes opportunities to make appeals to rights where doing so would conflict with strategic goals. Golder contrasts Foucault’s discussion of suicide, in which he appeals to a right to die, with what Golder sees as a conscious refusal on Foucault’s part to appeal to an analogous right to life when arguing against the death penalty. Whereas in the first case death might offer a means of resistance to biopolitical power, in the second case an appeal to a right to life would be likely to “play into the hands of biopolitics and thereby endors[e] the state’s claim to manage and protect life” (144).

Golder’s interpretation of Foucault’s use of rights as strategic is compelling. But if appeals to rights are tools to be used for certain ends, then we should ask how effective their use has been. It seems to me that for now our answer must be “not very”. In the decades following Foucault’s death, discussions of rights do not seem to have moved in a direction conducive to Foucault’s approach. Appeals to rights have been used by hegemonic states to help justify a series of more or less egregious interventions around the globe, from Kosovo to Iraq. Appeal to a right to die is much more likely to be found in the context of government legislation of Dignitas-style clinics than in connection with a Foucauldian aesthetics of existence. All of which suggests that liberal interpretations of rights are more entrenched than ever. Moreover, to the extent that Foucault’s appeals to rights have enabled him to be interpreted as a late convert to liberalism, the risks of appropriation seem to have been underestimated. Golder would probably respond (to this last point at least) that possibilities of interpretation are never foreclosed and that his book forms part of an attempt to vindicate Foucault against such appropriations. As such, Foucault and the Politics of Rights is salutary. But the question of the strategic value of the rights approach remains. And it is at this moment far from clear that the potential benefits of such an approach outweigh its risks.

For this reason, it would have been helpful had Golder offered a more substantial explanation of what motivates Foucault’s turn to rights. Although Golder offers exemplary explanations of how Foucault’s appeals to rights should be understood, he says relatively little about why Foucault starts making these appeals just when he does. In so far as Golder does offer an explanation, it is based on Samuel Moyn’s account of the emergence of our modern conception of human rights in the 1970s. Golder thus sees Foucault as simply making use of newly available conceptual materials. I find this explanation unsatisfying. Various conceptions of rights are available to Foucault from the time of his earliest writings. Indeed, in so far as such conceptions of rights are, on Moyn’s account, still gestating during this period, we might think that they are more open to the process of critical counter-conduct. And yet Foucault does not appeal to rights at this point. Why not? Are the risks too great? And what changes to make Foucault think the appeal viable? If Foucault’s turn to rights can be understood as more than simple opportunism, then we might come to a better understanding not only of Foucault’s use of rights, but also of what is at stake in appeals to rights more generally.

Foucault and the Politics of Rights is an important book addressing important topics. Golder provides clear interpretations of central Foucauldian concerns and timely refutations of prominent misinterpretations of Foucault on rights. More importantly, Golder compellingly argues for the continuing relevance of Foucault’s approach to rights, aside from any historical interest. For all of this, Foucault and the Politics of Rights is to be highly recommended.