Marx & Philosophy Review of BooksReviews‘Confrontation: A Conversation with Aude Lancelin’, ‘What Is to Be Done? A Dialogue on Communism, Capitalism, and the Future of Democracy’ reviewed by Mauro Di Lullo 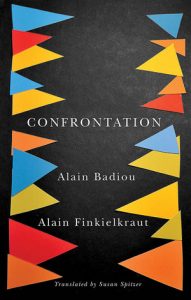 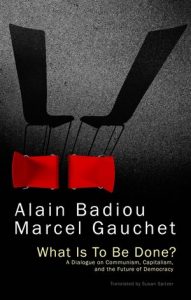 Alain Badiou
What Is to Be Done? A Dialogue on Communism, Capitalism, and the Future of Democracy

Almost thirty years after the ‘end of communism’, and the ‘end of history’, What is to be done? A Dialogue on Communism, Capitalism, and the Future of Democracy and Confrontation are two books that help us understand what is to be done to recover the ‘communist hypothesis’ and create an alternative political and social framework to a triumphant neoliberal ideology.

In What is to be done? A Dialogue on Communism, Capitalism, and the Future of Democracy, a previously unpublished dialogue between Alain Badiou, a key figure of Marxism and philosophy, and a leading advocate of the ‘communist hypothesis’, and Marcel Gauchet, a major advocate of neoliberalism, challenge one another. They discuss history, politics and philosophy, and strongly question one another’s ideas of, on the one side, recovering the ‘communist hypothesis’, and on the other, the possible reform of a compromised neoliberal ideological model.

The book is composed of a Foreword, eight chapters, and a Conclusion. The Foreword, The future of an alternative, by Martin Duru and Martin Legros, begins with a long quote from Vladimir Lenin’s essay What is to be done?.

So, what is to be done in these times of triumphant neoliberalism? Can parliamentary democracy be reformed, or is the only alternative to globalization and an aggressive capitalism represented by the ‘communist hypothesis’, as Badiou affirms in his oeuvre? The foreword sets the conversation between the Marxist Badiou and the reformist Gauchet. Yet, it also tells us how, notwithstanding the political and philosophical differences, Badiou and Gauchet agree on the need to ‘restore politics as the only sphere in which a collective universal can emerge’ (xvi).

In Chapter 1, The encounter with communism, the two thinkers discuss their personal experience with historical communism. They also remember their early intellectual influences: Sartre, Althusser and Lacan for Badiou, and Castoriadis and Lefort for Gauchet. The chapter also offers a discussion on the intellectual’s role in public life: how should intellectuals remain engaged in public life? Here the discussion begins with Sartre and continues in the second chapter on Marx and Lenin. Chapter 2, From Marx to Lenin, offers an insightful discussion of Marxism, Leninism and the 1917 Bolshevik Revolution.

Badiou explains the political, social and ethical difference between the ‘communist hypothesis’ and the Soviet Regime. Communism, according to him, was not represented by the Stalinist model. In his criticism of any effort to recreate the ‘communist hypothesis’ Gauchet refuses to understand Badiou’s unconditioned rejection of the Soviet experience. Gauchet’s inadequate analysis returns in Chapter 3, Totalitarianism, where he, immediately and without sufficient political and historical analysis, relates fascism and Nazism with communism (25).

In the same chapter Badiou continues his discussion trying to explain why we cannot discuss the Soviet experience and the other East European regimes as communist. The Maoist Cultural Revolution is also discussed here, and while Gauchet affirms it was a mere repetition of Stalinist politics, Badiou clarifies the authentic meaning of the Cultural Revolution beyond any partial reading of those events.

While Badiou affirms that democracies are unable to regain control from capitalism, Gauchet remains highly optimistic on neoliberalism’s future and its capacity to exercise control on capitalism

The profound disagreement between Badiou and Gauchet continues in Chapter 5, What is the meaning of the crisis?. In this chapter it is the historical analysis of the beginning of globalization and its disturbing consequences for modern regimes which creates the greatest intellectual debate between the two thinkers. Their disagreement returns in Chapter 6, The end of imperial logic, or the continuation. Badiou shows the readers the existing link between European States and the Global Empire. Gauchet reiterates his passionate defence of neoliberal regimes without adding new elements to the discussion. Chapter 7, The deconstruction of capitalism, still shows us the apparent distance between Badiou and Gauchet. The Marxist Badiou and liberal democrat Gauchet cannot agree on the reasons causing the current crisis of capitalism and on ‘what is to be done’. However, it will be in the Chapter 8, Why we’re not finished with politics and in the Conclusive Remarks, In search of a lost deal, where both thinkers will find a common ground of discussion and agreement: despite the profound political and philosophical differences, Badiou and Gauchet agree on the need to ‘restore politics as the only sphere in which a collective universal can emerge’ (xvi).

The book offers an important discussion between two leading French intellectuals on “what is to be done”, and how democracies can be secure from capitalism and its disturbing consequences. Whether communist hypothesis or liberal democracies, only politics can save us.

The urgency to recover the ‘communist hypothesis’ as the only possible alternative framework to a triumphant neoliberalism, returns in Confrontation. This book creates a new horizon on politics and communism at the beginning of the twenty- first century. It also discusses the Shoah, Judaism, Israel and Jewish Universalism beyond any narrow understanding of the Middle East conflict and its disturbing consequences.

The inspiring and challenging perspectives of its four chapters are historical, political, comparative, and theoretical, as it already appears in the Foreword by Aude Lancelin, where the main themes of this confrontation are explained to the readers.

‘Why bother debating, then?’ (ix) is asked in the foreword. The whole book is a fascinating historical and political debate between two leading French thinkers, Alain Badiou and Alain Finkielkraut, looking at historical and political developments of Western societies from the 1989 Revolutions in Eastern Europe to the beginning of the twenty-first century. Readers can better understand the importance of the ‘communist hypothesis’ as the only political and theoretical alternative framework to a triumphant neoliberal ideology.

Twenty- seven years have now passed since the fall of the East European Regimes and the triumph of neoliberalism and capitalism, yet, the ‘communist hypothesis’ still appears not understood by scholars and commentators. Badiou explains to the readers its political and ethical relevance, and its difference from any kind of eastern European ‘communist’ regime of the Cold War era. Finkielkraut is Badiou’s interlocutor.

In 2009, two years after Sarkozy’s election as French president, journalist Aude Lancelin organized a confrontation between the two thinkers. They met again in 2010, to discuss political, historical and philosophical issues. Those two confrontations, revised and edited, make up the core of this book, perfectly translated by Susan Spitzer.

‘Neither of these men [… are] known for [their] love of consensus and the middle ground, let alone for [a[ tendency to compromise”(viii), Lancelin writes in the Foreword. ‘A tense, electric, and occasionally even violent atmosphere came across on the page. This was clearly no ordinary debate but rather a confrontation, almost in the physical sense implied by the word’ (vii).

Yet, the book is also a great opportunity for both philosophers to reject the stereotypes associated with their names and their works; Badiou, in particular, has been given the role of violent radical Maoist, despite his works on Mathematics, St Paul, Jewish Universalism and other philosophical and ethical issues. Confrontation is divided into chapter entitled National Identity and Nations, Judaism, Israel, and Universalism, May ’68 and Communism (Past and Future). Both thinkers continuously argue against the other. At one point of the confrontation, Badiou shouts “Give me a break!” (80) when Finkielkraut affirms that radical Islamism is a real global threat for western democratic societies.

In the first chapter, the two authors discuss national identity and nations. This is a chapter where Badiou’s communism is discussed as the possible answer to resurgent nationalistic and xenophobic politics. While Finkelkraut is defending French national identity as represented by ‘the Coronation Rite of Reims…the Republic one and indivisible, our kingdom of France….’ (7), Badiou is discussing France’s universal and internationalist values and he is opening a stimulating conversation leading us to the second chapter of the book on Jewish identity, Israel and Universalism. Here again Badiou is able to overcome all the false accusations against his writings of Anti-Semitism and unconditioned support for radical Islamist movements. The readers are given an opportunity to understand the meaning of Jewish universalism, and the profound admiration that Badiou shows for the Jewish people, their history and the tragic sufferings of the Shoah. The third chapter is on May 1968, its significance for France and more broadly for the very concept of democracy. While Finkielkraut strongly defends the ‘achievements’ of liberal democracies, Badiou discusses a new model of society beyond the inequalities created by the Western neoliberal ideological model. Badiou’s hypothesis is a political and social model, namely the ‘communist hypothesis’. The final chapter of this work continues the conversation between the two philosophers on the ‘communist hypothesis’, and its political and ethical relevance to the politics of the twenty first century. Badiou explains his ‘communist hypothesis’ as completely different from any kind of totalitarian regime of the past and future.

This is an important book on communism and politics, and, it shows us the ideas of two inspiring and avant-garde philosophers always retaining wisdom even in the midst of their political and philosophical confrontation.