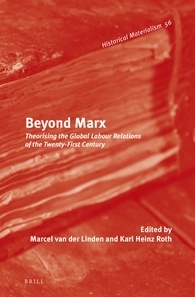 There is longstanding, and continuing, contention about the relationship of Marx’s thought and writings to what subsequently became ‘Marxism’. For some, problems in the transition from Marx to ‘Marxism’ began with Engels’ editing and interpretation of Marx’s unpublished work following the latter’s death. The provocation presented by this collection is aimed directly at Marx himself, and especially the Marx of Capital. In their introductory essay the editors suggest that ‘Marx neglected studying the working class in favour of studying capital’ (9), and go on to criticise Capital for its ‘objectivism’ (11), methodological nationalism (13-4), and Eurocentrism (14-5). An additional emphasis of their critique of Capital is more empirical and historical: that the ‘doubly-free wage-workers’ posited in Marx’s theorisation have ‘always’ been ‘a significant minority within the proletariat’ (13). `Marx’s work is only of limited use – and perhaps of no use at all – to efforts to give conceptual expression to the overwhelming complexity of global labour relations, because of the determinist narrowness of its conceptual approach.’ (17)

To pursue this argument and explore its consequences, the editors have assembled 18 mostly original essays by several generations of ‘intellectuals situated on the heterodox margins of Marxism’ (17). The contributors are drawn from France, Italy and Germany, as well as the anglophone world. One of the virtues of the book is to make available English translations of essays from those other languages (and traditions), albeit in occasionally clumsy fashion.

The contributions are of very different types across a wide range of topics. They include essays on eighteenth-century sailors and ‘war-workers’, presented as ‘history from below’ in the spirit of E.P. Thompson; on different labour regimes and categories of their workers, across the histories of capitalism up to and including the ‘cognitive’ and ‘self-employed’ labour of today, illuminating differences but also emphasising continuities, not least for some authors the centrality to capitalism of continuing ‘primitive accumulation’ and its attendant violence; on reproductive labour; on philosophical debates about the individual and freedom; on how and why Marx got wrong the theorisation of labour power as a commodity unique to, and definitive of, capitalism; on how money in capitalism works and its importance to labour power and the constitution of the working class(es); on experiences and lessons of workplace-based activism in Italy and Germany as a necessary element of developing the analysis of class politics ‘from below’; and an essay by Subir Sinha on formulations and interpretations of the working class in communist politics in India, which is an exception in this collection as both a specific case study of links between theory and political practice and a contribution on the South of the capitalist world.

The editors group the essays in two (untitled) parts, the first of which they term ‘historical perspectives’ (19), and the second of presumably ‘theoretical’ contributions. This is hardly a watertight distinction, and its tensions point towards some wider issues. For example, the first part includes Maria Mies’s restatement of the ‘subsistence-perspective’ she pioneered from the 1970s (with Veronika Bennholdt-Thomsen and Claudia von Werlhof) with reference to capital’s specific modes of exploitation of women (patriarchy), colonies (the South) and nature, and Silvia Federici on ‘elder-care work’ in contemporary capitalism and how and why it illuminates ‘the limits of Marxism’, as well as Sinha.

The second part includes an essay by Aldrich Meyer on the defeatism of the ostensibly ‘automatic’ theory of capitalist collapse in Capital, which undermines any emancipatory intent, and which is placed – in the only substantive argument about the historiography of Marx’s work – in the conjuncture of the defeats of 1848-9 and after (a proposition first suggested by Karl Korsch), the culmination of prior struggles against proletarianisation. Otherwise, one can note that there is little in these essays on the periodisation of capitalism, but a strong emphasis on the emergence of capitalism before industrialisation, to suggest key continuities between labour regimes, forms of dispossession/proletarianisation, and resistance to them in early modern Europe and in today’s globalising world.

Fortunately a concluding chapter by the editors – ‘Results and Prospects’ – aims to draw together the different strands of their authors’ contributions, and could well be read first. In it they recognise that the essays are largely negative in their discussions of the problems of Capital, and that they diverge in whether they propose revisions and modifications of the arguments of Capital or regard its wholesale rejection as a condition of moving forward. At the same time, they advance their substantive argument on several fronts, including through a delineation of five ‘socio-economic junctions’ of exploitation in capitalism: ‘appropriation of the personality [as in slavery, HB], the labour-capacity [of ‘free’ wage labour, HB], the means of labour and subsistence, the products [of labour, HB] and the reproductive sphere of other people’ (478-9).

In the editors’ view, all the essays, in one way and another, support the ‘empirical fact’ of ‘the dynamics of capitalist development as an ongoing process of adjustment to the independent counter-dynamic of the multiverse of workers’ (446), ‘multiverse’ referring to the many different categories (and experiences) of those who make up the working class(es) of capitalism.

Moreover, ‘workers and capital are principally equal-ranking’ (447) in the determination of processes of capitalist development. Is this ‘empirical fact’ or an a priori stance? Indeed, the current global crisis of capital is marked by ‘a rather far-reaching passivity of the lower classes’, ‘a few significant exceptions aside’ (485). They hope that this passivity might change as austerity bites ever deeper, but is the ground of such hope more reminiscent of the political prognoses of much ‘orthodox’ Marxism rather than recognising the many and complex determinations (and contingencies) that shape popular politics of contention and resistance (see Chalcraft 2016)?

In a collection of such different voices and preoccupations, it may not be useful to focus on what has been left out unless it can help clarify issues in the new political economy of labour that the editors aspire to. Their ambition is great: they consider that their volume is a major step forward in redressing a century of the costs imposed by ‘orthodox’ Marxism (485), which may cause some surprise. A first reason is that the (incomplete) intellectual project of Capital was conceived, above all, as a necessarily highly abstract theoretical exploration of the inner (‘hidden’) relations and dynamics of the capitalist mode of production. Despite its historical illustrations, it was not intended as a concrete account of capital’s history to date, nor as a sufficient ‘tool-kit’ in itself for investigating the different times and places of the development, workings and contradictions of capitalism, for which many (other) determinations are needed.

Second, surely recognition of this began with, and exercised, the next (second) generation of ‘classic’ Marxists. One exemplar is Rosa Luxemburg, whose argument for the necessity of continuing ‘primitive accumulation’ to the reproduction of capital on a world scale is strongly endorsed by several of the contributors to this book, and apparently the editors too (215-6, 298-9, 458, 467). On the other hand, there is barely any mention of Lenin, only one reference to his writing and none to his Development of Capitalism in Russia, the most extensive analysis of a concrete instance of capitalist development in the ‘classic’ canon. In that study, Lenin (1899) warned against ‘too stereotyped an understanding of the theoretical proposition that capitalism requires the free, landless worker’, thereby anticipating a key point of departure of this collection, and much materialist debate continuing today, for example, around ‘free’ and ‘unfree’ labour in capitalism (e.g. Banaji 2003). Indeed, a third kind of lacuna is the lack of any reference to Marxist scholars today who use Capital as an indispensable, but not exclusive, source of inspiration in their major contributions on the history of capitalism as global system ab initio. Two examples of very different kinds are Jairus Banaji (2010) who deploys the ‘laws of motion’ of capitalism as a key organising concept, also distinguishing modes of production and modes of exploitation in his construction of ‘theory as history’, and Jason W. Moore’s ambitious project to construct the history of capitalism as ‘world-ecology’ through a reformulated ‘new’ law of value (Moore 2015).

Lenin himself had also gone ‘beyond Marx’, whose view of the development of agrarian capitalism deployed an ‘enclosure’ ‘model’, while Lenin established the centrality of the class differentiation of peasant farmers when commodity relations are internalised in their circuits of reproduction. That remains an indispensable analytic of agrarian political economy to this day (even if Lenin had exaggerated the extent of differentiation in late nineteenth-century Russia), and with implications beyond agrarian studies. An (undifferentiated) ‘peasantry’ is invoked by several of the contributors (and by the editors) as a major class of producers, outside the proletariat of ‘free’ wage labour, that is exploited by capital throughout its history (211-2, 216-8, 290-5, 448, 451, 467). More attention is given to the work of Alexandr Chayanov (1888–1937), the great theorist of agrarian populism, than to Lenin at the cost of even acknowledging the differentiation of peasant classes in capitalism (290-2, 294, 301). This enables the celebration, following Chayanov, of peasant ‘subsistence’ economy as a building block of any socialist imaginary (231-6), and the emphasis on ‘enclosure’ as a mechanism of capitalist exploitation (appropriation of the means of labour and subsistence, above), central to the discourses of today’s anti-globalisation movements without consideration of class formation ‘from below’ in the countryside.

More generally, in what ways, and to what degree, do the problematic features of Capital argued – a mistaken conception of the commodity labour-power, from which follow narrow and ‘deterministic’ notions of ‘exploitation’ and the working class in capitalism; an automatic collapse theory of capitalism that disarms revolutionary thought and practice; a fetishism of social progress as the development of the productive forces, and so on – explain the contradictions, vicissitudes and shortcomings, of Marxist intellectual work and socialist and communist politics since the time of Marx? Is, say, Stalinism as theory and practice principally explicable by the legacy of Capital (which would be an idealist stance)? If not, then what else is needed?

In short, this collection contains much of provocation and value but may not take us as far along the royal road as its editors wish (484). And surely there is much else in the archive of Marxism, both historically and today, that can be drawn on to provide further means of advance.

[There is another review of this book here]