Marx & Philosophy Review of BooksReviews‘Against Everything: On Dishonest Times’ reviewed by George Hoare 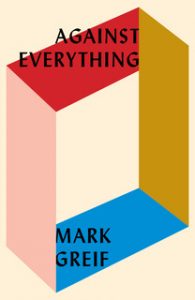 Mark Greif
Against Everything: On Dishonest Times

George Hoare works for a London-based non-profit. He is the co-author of An Introduction to Antonio …

The difficulty with a collection of essays is how to impose, or where to find, coherence in a work not written around a central thesis. Greif’s essays, written over a decade, deal with a wide range of subjects, from rap to food, and the sexualisation of children to hipsters. Greif himself, in the short introduction to the collection, attempts to frame his enterprise: it is ‘a book of critique of things I do. Habits in which I am joined by a class of people, call them the middle classes, or people in rich nations, or Americans and Europeans and their peers the world over. Call them us, or call them you. I want to talk about you’ (ix).

Greif writes about ‘the things you are supposed to do’ (ix); he evaluates our reasons for doing them, and the consequences of our everyday practices. In this sense, there is a definite sense of the critique of everyday life about Greif’s project, and a note of both Bathes and Lefebvre in his approach. By far the strongest parts of the book, which include some of the most urgent philosophical writing in English in the past decade, are when Greif concentrates on the site of our closest daily activities, the body, and when he interrogates the concept of ‘experience’ that underlies the experience of our lives under late capitalism.

Greif’s main argument emerges out of his treatment of a set of interrelated concepts, namely exercise, health, sexual desire, eating, childbearing, youth and age. These are the ‘necessities of life’, those things that, according to the dominant ideologies of our time, make up the sort of life we are supposed to live. These are the things, according to Greif, that capitalism elevates to the necessary once we are in large part liberated from the physical necessities of earlier times. Greif draws on Marcuse, although not systematically, in exploring how our freeing from earlier necessities may lead to the imposition of new necessities rather than a true liberation. Late capitalism, at least in Western Europe and America, then, presents a set of axes on which a fulfilling (or, more likely, ‘successful’) life can be evaluated. Although the meaning of life is not a topic that Marxist philosophy has engaged with, it is still necessary to dissect the ideological constructions that in large part replace contemporary philosophical discussion on the issue. Greif explores the ways in which we are compelled to turn much of our lives from material reproduction not to following the goals that we reproduce ourselves materially to pursue to a process of ‘life maintenance’, the living of a life with no ostensible goal other than the extension of our lifespan.

In Greif’s four interrelated essays on the body, respectively on exercise, health, the sexualisation of children, and reproduction, he develops a compelling critique of our obsession with quantifying our health, and our practice of replacing a vision of a good life with that of a healthy and marginally longer one. Touching on Arendt, he explores the undermining of the public/private division, particularly in exercise. The processes of bodily maintenance, previously private, are now public, undertaken in gyms and parks. Differently from team sports, there is a kind of masturbatory quality of modern exercise; it is an inward-turning celebration, and a self-satisfied vanity. The gym-goer is at the same time an evangelist, chosen by God, smugly to display health and beauty. Greif devotes a number of brilliant, memorable passages to this theme in Against Exercise, which is the stand-out essay in the collection. He writes in a passage worth quoting at length:

Running is [the] most insidious [of all forms of contemporary exercise] because of its way of taking proselytising out of the gym. It is a direct invasion of public space. It lays the counting, the pacing, the controlled frenzy, the familiar undergarment-outergarments and skeletal look, on top of the ordinary practice of an outdoor walk. One thing that can be said for a gym is that an implied contract links everyone who works out in its mirrored and pungent hangar. All consent to undertake separate exertions and hide any mutual regard, as in a well-ordered masturbatorium. The gym is in this sense more polite than the narrow riverside, street, or nature path, wherever runners take over shared places for themselves. With his speed and narcissistic intensity the runner corrupts the space of walking, thinking, talking, and everyday contact. He jostler the idler out of his reverie. He races between pedestrians in conversation. The runner can oppose sociability and solitude by publicly sweating on them. (12)

The moral aspect is key here: non-exercisers are themselves to blame; they are a weight on our health-care system, and are committing a ‘slow suicide’ (8). It is through this moral pathway that the individualisation of health becomes part of the dominant ideologies of the body.

This is not to say that Greif’s other essays are not interesting or worth reading. In his The Reality of Reality Television or Radiohead, or the Philosophy of Pop he is an astute, and often brilliant cultural critic. His point that we have an underdeveloped philosophy of pop music—our most ubiquitous and urgent art form—seems difficult to dispute, but it also represents a starting point rather than a fully-formed account. Moreover, Greif’s contention that we need a wealth ceiling as well as a kind of universal basic income, in order to liberate us from absurd wealth as well as obscene poverty, is a potentially useful addition to some arguments around UBI.

But what really elevates this collection above merely an excellent collection of interesting essays is the way in which Greif develops a concept of experience that reflects what it is like to live in our historical moment of late capitalism. Arguably, his project in this sense is consonant with Lukács’ attempt in Reification and the Consciousness of the Proletariat to explore the phenomenology of being a commodity, although Greif uses a different register, and a different set of conceptual tools.

So, what is the notion of experience that Greif finds at work in twenty-first century capitalism? First, as Greif notes, we have a valorisation of individual, lived experience of the sort catalogued, in part, on social media. This experience is non-transferable and escapes capture. Specifically, we view our lives as the pursuit of a collection of sought-after experiences (the plural here is important), most notably those related to drugs, sex and/or travel. These ‘high-points’ of living, often themselves packaged or commodified in a number of different ways, have a ‘flattening out’ effect on the rest of our lives, which seem dull and disappointing by comparison. Experience, unlike happiness, is directly attainable, definite and cumulative (78); it leads easily to a vision of life filled up or sued up by a certain quantity of experience. It is hardly surprising that passing from the quality of happiness to the quantification of experience already prefigured in utilitarianism. The quantification and instrumentalisation of life under capitalism also reaches into our relations to our bodies, and our reflections on what our lives are, or ought, to be.

Greif explores three responses to this dominant ideology of experience. We can attempt to ‘turn even banal or ugly things into objects of singular aesthetic interest’ (aestheticism) or we can see the events of our lives as ‘moral examples that would encourage the constant transformation and appreciation of the self’ (perfectionism) (227). Or we can turn away from the experiences of modern life—away from twenty-four hour news, the extreme and potentially ‘always-on’ sociality of social media, and acutely compelling box sets. Greif describes this attitude (‘I just had to turn the TV off. I couldn’t stand it anymore’) as an anaesthetic response, one that attempts to weaken or abolish an overbearing concept of experience. Within the category of anaesthetic ideologies Greif includes Stoicism and Epicureanism, but also modern advocates of ‘non-attachment’: Buddhists, mindfulness zealots and stoners. In each case, Greif concludes, we partly sympathise with the anaesthetic turn. In his words, we see the stoner as ‘a symbol of a bizarre but real reaction to something we can’t name’ (233).

The political consequences of this conception of experience are less clear. The ‘morality’ and practicalities of daily health choices increasingly displace any stronger social or political conception of the ethical. As Greif puts it (241): ‘[h]appiness has wound up in an ideology of the need for experiences’. In turn, this happiness-by-experience is itself moderated and regulated by the necessity of strong and defining experiences.

Greif’s lasting contribution, then, is to have examined a critical part of the ‘structure of feeling’ of late capitalism, namely our relation to our bodies, and our understanding of what constitutes a good life. By searching for answers at the level of everyday life, Greif continues Gramsci’s project of critically engaging with the ‘common sense’ of our age. Being ‘Against Everything’ that makes up a dishonest, instrumentalising, hectoring, tiring and joyless common sense of twenty-first century capitalism is therefore a necessary posture. Greif’s essays open the way for a more systematic and sustained look at the aesthetics and ethics of the ‘negative’ of daily life: the things we do but don’t want to, the things we prize but may not value or like, and the ways of thinking about ourselves, our bodies, and others that just don’t seem to satisfy.