Marx & Philosophy Review of BooksReviews‘The Universal Adversary: Security, Capital and ‘the Enemies of All Mankind’’ reviewed by Deniz Ozcetin 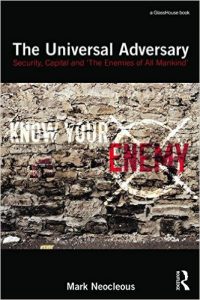 Mark Neocleous
The Universal Adversary: Security, Capital and ‘the Enemies of All Mankind’

In his most recent book, Mark Neocleous pursues a crucial component of his broader discussion of capitalism, the state and security: the enemy. Through a Marxist appropriation of the Foucauldian concept of power, Neocleous aims to ‘focus on the techniques of power’ used to ‘ensure the security of the state and capital’ through the construction of ‘monstrous’ enemies and ‘show what kinds of political utility or economic profit might come from them’ (9). The key point in the construction of these enemies is their monstrosity, their alienated state and their abnormality, which helps in the political construction of fear and justifies the use of the powers of war and police to annihilate them.

As in the case of his development of the concept of ‘pacification’, Neocleous once again adopts a mainstream ‘military’ term and utilizes it from a Marxist perspective. This time, the term he uses, ‘The Universal Adversary’, is taken from US Homeland Security Emergency Planning Scenarios to name different enemies (as defined by the US security state, ‘foreign terrorists, domestic radical groups, state-sponsored adversaries, or in some cases disgruntled employees’) (17). However, Neocleous argues that it becomes an empty signifier ‘that can be applied to anyone who challenges the power of the state and capital, anyone who resists the violence being conducted in the name of “peace and security” and anyone who looks to be a threat to “law and order”’ (128). That is why Neocleous argues that different incarnations of the Universal Adversary since the early days of capitalism all point to its archetypical enemy: the rebellious and disgruntled worker.

The book consists of four chapters, each focusing on a particular Universal Adversary throughout different periods of history: these are ‘the disgruntled worker’, ‘the zombie’, ‘the Devil’ (and the witch in particular), and ‘the pirate’ respectively. The reason why Neocleous could use a term from contemporary security jargon to denote certain deviant figures labelled ‘enemies of mankind’ dating back to earlier periods of capitalism lies in the fact that these figures were/are all in conflict with the primitive accumulation of capital. However, he also argues that the term Universal Adversary used in the contemporary security documents is related to another concept, which he defines as ‘the new fetish of the liberal state’ – resilience. Resilience characterizes ‘preparing for the unpredictable’ which more or less defines the post 9/11 security paradigm. One drawback of the book could be the weakness of the link between a security concept emerged and moulded by the post 9/11 atmosphere and enemies of order in the early periods of capitalism.

In the first chapter, Neocleous starts his analysis with the archetypical enemy of the capitalist order: the disgruntled worker. Referring to Edmund Burke’s use of the term ‘swinish multitude’ to describe the newly emerging English working class and urban poor, Neocleous claims that what connects the anti-revolutionary texts of the 18th century to the emergency planning scenarios of our day is the word used to denote the worker: ‘disgruntled’. Neocleous likes etymological digging and this time he points to the centuries-old analogy between the lower classes and the pig. This is a two-way analogy based on their uncivilized behaviour and inhumanity (that is, their beastliness): they are like disorderly, unruly pigs living in filth.

The second chapter focuses on another incarnation of the Universal Adversary: the zombie. Increasing in popularity after 9/11, zombie narratives have found their way into Emergency Planning Scenarios run by the US and the UN. As a hypnotized, nameless ghoul devoid of reason, the zombie can easily be identified with the archenemy who appears within contemporary security discourse – the terrorist. However, Neocleous goes beyond this popular narrative and analyses the critical radical potential of the zombie by revealing what it actually represents in the Universal Adversary – the ‘disgruntled worker’. To do so he takes us back to the Haitians’ struggle for independence against colonial rule and slavery. Originating from their religious beliefs rooted in Africa, the zombie in fact represented the horror of being slave labour completely subordinated to the will of a powerful master. So Neocleous’ sharp political analysis reveals what is beneath the popular zombie figure craving for human flesh: the zombie-worker producing commodities. He pushes his analysis further by elevating the zombie figure to the meta-narrative of capitalism as the symbol of ‘dead labour’ – what we turn into by working for a wage. However, the zombie represents not only a slave worker, but also a ‘rebellious’ one. Neocleous claims that it represents the deepest fear of the bourgeoisie that underlies its greatest dream: the quiet, obedient worker who ‘works faithfully and is not afraid of long hours’ turning into rebellious, disgruntled worker (57). And what makes it even worse is that it becomes a threat when it is a ‘collective’ rebellion: the zombie-worker rebellion is ‘contagious’ and can turn into an ‘epidemic’ at any moment. Here Neocleous refers to the intermingling of medical and class discourse in terms of the idea of contagious epidemics in the history of urban capitalism: the poor do not only carry disease but, rather, their very poverty and rebelliousness is contagious.

The third chapter focuses on the Devil and elaborates on the role of the apocalyptic discourse of emergency planning in reinforcing the conservative forms of state power by employing theological language in defining the enemy, especially in the war on terror. As long as the state is defined as a defensive force against evil, its enemies could easily be defined as devilish, a process called ‘the political invention of the Devil’ by Neocleous. The war on the Devil is discussed in the case of ‘witch-hunts’ – a term used to describe the punitive practices of the state against everyone seen as a threat to the political order, ranging from the many women said to worship the Devil in the 17th century through to the communists in the 20th century. Neocleous reads the witch-hunt as a technique of power used to reinforce the power and sovereignty of the state – a way of hunting the ‘enemy within’. He therefore overthrows the widely accepted view that sees witch-hunts as a result of religious fanaticism. Instead, he argues that the witch-hunts of the 17th century were a politically organized and legally regulated war fought against the Universal Adversary in the form of (mostly female) ‘masterless’ poor who refused to become paid labour and attempted ‘to obtain some means of subsistence without going through the hardship of labour’ (97). Neocleous argues that the bourgeoisie has been obsessed with vagrancy and idleness because it ‘allowed them (the workers) time to organise and mobilise politically’ against the whole system of wage labour and capital secured by the police power of the state (99). This is the historical background of the identification of disgruntled and rebellious, radical and revolutionary people with the Devil.

The last incarnation of Universal Adversary discussed in the fourth chapter is the ‘pirate’, a figure emerging in the early periods of capitalism but who resonates for us today. The National Security Strategy document released by the US in 2002 stated that ‘terrorism will be viewed in the same light as slavery, piracy, or genocide’. Neocleous tells the story of how a crime as simple as a kind of robbery turns into a crime against humanity, and its perpetrator, the pirate, into hostis humani generis (enemy of all mankind). Once again Neocleous goes back to the early days of capitalism and shows that piracy was indeed allowed and even licensed by the states to attack their enemies in the sea, which was denoted by the term ‘privateering’. Neocleous claims that only after the capital matured enough to generate its own devices of violence did piracy became a crime – the first international crime. In order to understand this transformation, Neocleous embarks on an archaeological digging of texts on piracy. Moving from the historical accounts of ‘pirate communities’, or even ‘utopias’, he claims that it is this anti-capitalist spirit which leads the pirate to be labelled as hostis humani generis, and piracy to denote everything that seems to be a threat to accumulation. Neocleous also refers to the emergence of universal jurisdiction (the exercise of international police power on high seas) in relation to piracy, in an attempt to secure the ‘worldwide market’; and that is also the story of how it transformed into a national security threat. This enables Neocleous to move to contemporary debates concerning intellectual property. For contemporary capital and its focus on ideas, creativity and intellectual property, the term ‘piracy’ has a new power, and in a few pages Neocleous shows how innocent acts such as copying music CDs become a crime ‘as heinous as terrorism, slavery and genocide’, and how people obtaining pirated material are not only criminalized but also treated as if they were part of a terrorist organization. Consequently, the pirate becomes an empty signifier just like the terrorist, which includes everyone against the power of state and capital.

In The Universal Adversary Neocleous provides a reading of the history of capitalism through its various enemies. In so doing he deconstructs popular/hegemonic discourses, such as the popular flesh-eating zombie myth or the idea that religious fanaticism was the motive behind the witch-hunts from a historical materialist perspective. Through an analysis of the figures of zombie, devil, witch and pirate, he shows what really underlies them is nothing less than the disgruntled worker. And it shows that what really matters with a new term such as ‘Universal Adversary’ is the security and power techniques used by the state and capital against an enemy considered universal. Neocleous adroitly provides a thorough history and discussion of these techniques.