Marx & Philosophy Review of BooksReviews‘Fossil Capital: The Rise of Steam-Power and the Roots of Global Warming’ reviewed by Jasper Finkeldey 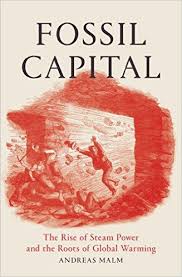 Andreas Malm
Fossil Capital: The Rise of Steam-Power and the Roots of Global Warming

Andreas Malm has written an incredibly ambitious book on the roots of climate change in mid-ninetieth century Britain. His insight and rigour are likely to set a new standard in climate change debates. It is also a bold book, as Malm engages with a well-researched historical period. Nevertheless, Fossil Capital makes numerous contributions to climate change debates that concern both the origins of man-made climate change as well as contemporary fossil use. Malm defines the fossil economy as ‘an economy of self-sustaining growth predicated on the growing consumption of fossil fuels, and therefore generating a sustained growth in emission in carbon dioxide’ (11). Fossil fuels once plugged into a capitalist economy puts growing pressure on the self-sustaining conditions that make life on earth possible.

The book starts with a puzzle. How come steam power made the race to become the most utilized source of energy at a time when waterpower was very competitive? Steam ‘gained supremacy in spite of water being abundant, cheaper and at least as powerful, even and efficient’ (93, emphasis in original). The cotton wheel – the centrepiece of British rampant industrialisation – was set in motion by two serious competing prime movers: Steam engines versus water wheels. Malm contends that in numerous Malthusian-informed historical analyses water scarcity is seen as main factor for steam’s final success. However, ‘no water scarcity loomed on the horizon … not even in central cotton districts. Rather, the shift from steam happened in spite of an overall abundance of unexploited watersheds’ (83, emphasis in original). Insightful are the statements of mill owners in front of the Factory Inquiry of 1833. An owner of a steam-powered spinning mill resents the ‘well-ascertained fact that water-power is cheaper than steam’ (89).

The race between water and steam was also a race between two visionaries. It is forgotten that Robert Thom was arguing for a future in which the country’s rivers would be harnessed, while James Watt’s fame as the father of the steam engine has not suffered until today. During his lifetime Thom had to learn why steam made the race. The ‘Achilles’ heel’ of the flow was the need for mill-owners to cooperate (116). Owners ‘fell afoul of the projects because of their inability to submit to planning, coordination and collective funding required for the expansion of waterpower capacity on this scale’ (118). It would have hence required coordinated investment, mutual trust and sometimes maybe even compromised revenues for capitalists involved. This prospect sat uneasily with the private property ideals of investors.

Malm advances that steam-powered production also made it easier to contain workers. Urban labour reservoirs were easier to tap in for steam capitalists than for their rivals who relied on waterpower. Labour colonies at rivers, in which forced labour was not rare, would literally see their labour force run away. In fact, two different economic models were facing each other. In the colonies, by the river beds ‘[t]he owner was investor and rentier, landlord and churchwarden, chief of police and industrialist in one person’ (140). In short, the colonies were run under quite feudal conditions, while labour in the factory was distinctly capitalist.

Steam power benefitted from run-away urbanization. This urban diaspora was not so much driven by jobs in the steam-powered industries, but ‘preceded’ it (146). When the flow of labour moved to the cities, the cotton industry was everything but booming. Nevertheless, the flux was key in creating an overflowing pool of proletarians with little choice but to sell their labour power. Increasing competition in low-skilled jobs sustained a hire and fire culture.

The nail in the coffin of waterpower was successful labour struggle. With the shortening of the working day through the Factory Act of 1833, which was a concession to defiant workers, manufacturers relying on water encountered a decisive disadvantage in relation to their competitors. ‘[A]ny reduction in the working day would be harder to bear for water than steam mills, since only the stock could be cut exactly so as to fit a given unit of time’ (175). Ebbs and flows put a natural constraint on waterpower. Floods can submerge waterwheels and droughts can keep the water wheel from turning. It was a blow when the manufacturers relying on the Factory Act put a limit on the extreme exploitation of labour by reducing working hours. While the constant power of steam guaranteed that cotton would be spun throughout the working day, flow was much more erratic and part of the working day went to waste due to a lack of power supply.

Malm thinks that fossil capital also had an ideological advantage. The bourgeoisie iconized steam with fuming poetry and built statues depicting James Watt, the father of the steam engine. Early fossil capitalism was a class project that subdued the work force by putting the machine in the centre of production. Malm shows that the victory of steam was relying heavily on the spell of its promise. The ‘mechanical mega-worker and anti-worker’ was portrayed as the antithesis to an idle workforce (215). Malm suggests that it was not least the lack of a similarly persuasive story among water manufacturers that contributed to their demise. The displacement of labour in a steam-powered economy was of course deceptive, as British coal mines were as labour-intense as they were backbreaking (218-221).

The rise of steam power however did not advance unchallenged. Sabotage to the steam economy became so frequent that the 1827 Act of Parliament established that any serious damage caused to steam engines or coal mines would be punished by death (223). Nevertheless, desperation and anger due to bad working conditions among the working classes culminated in the general strike of 1842. The first of its kind in any capitalist country, but fossil capital had the government on its side and the military was key in crushing the emerging movement. The judiciary managed to convict an impressive amount of workers to calm the situation (235).

Interestingly, Malm finds a ‘proto-environmentalist component of the critique of steam: the persistent imaginary of belching smoke and consuming fire, noxious atmosphere and receding nature, extinct vegetation and unbearable heat’ (244). This introduces a discussion linking the history of the fossil economy back to global warming. One of Malm’s contentions at this point is that only because humans know how to use fossil fuels it does not mean that they are necessarily making use of it. It was rather that capital relations proved far more compatible with steam than with the flow. In Malm’s words: ‘the relations preceded, selected – constructed – the prime mover that best suited their own dynamics’ (276). Before fossil fuels can fire a capitalist economy, fossil fuels must already be a ready commodity.

Paradoxically the way capital amasses wealth effectively amounts to centralization of resources, while capital relations can only function in an anarchic environment with no central planning. Prices, labour, and markets must float freely in order for capitalists to make their unimpeded choices. This potential paradox could have been explored more.

Finally Malm discusses what this all has to do with today’s world. Rather abruptly the discussion jumps more than one and a half centuries to contemporary China. At first glance, China has become the new chimney of the world; in other words, China has taken the role Britain led the century before last. But Malm’s story is more complex than merely blaming China for today’s runaway climate change. He looks at an emerging body of research on emissions embodied in trade (EET), and how it sheds quite a different light on China’s emissions. Almost half of China’s recent emissions were combusted for the export sphere (331). From a comparative perspective, China’s political economy produces ‘low wages and high carbon intensity’ (346). Until recently China’s workforce was perceived as extremely docile and industrious, which contributed to China’s attractiveness for foreign direct investors. This changed when workers in different plants started calling for union representation and better working conditions. China’s reputation for being a diligent production site has subsequently suffered but alternative production sites cannot hold up to China’s developed infrastructure.

In the last two chapters, Malm discusses contemporary alternatives to the fossil fuel economy. Here Malm encounters a paradox not dissimilar from the early victory of the stock over the flow. Despite the fact that the price of solar and wind power has plummeted in recent years, alternative energy sources encountered divestment. ‘[T]he more the price of energy from the flow approaches the zero cost of fuel, the smaller the prospects of making profit and the more deficient the private investments will be’ (371-2). What is more, the coordination impasse familiar from earlier days of British industrialization can be revisited today. Projects to install concentrated solar power systems in the deserts of northern Sahara and Gobi have failed due to a lack of ‘planning and coordination’ (376) between the major companies and countries involved.

Malm’s discussion ends on a rather pessimistic note. This is hardly surprising, as he observes the same mechanisms being responsible for past and present root causes of global warming. Capital relations preceded the fossil economy. But one seems impossible to decouple from the other since their paths have been so intimately linked for a long time. Fixed investment into fossil fuel facilities has kept the fire burning over a long period of time. This kind of large-scale investment would need to be redirected to projects such as the failed desert projects mentioned before. For climate change to be held at bearable levels, fossil fuels need to be left untouched once and for all. Within the current economic paradigm this seems highly unlikely, if not impossible. Cooperation and planning are the essentials if climate change is to be kept at bay.

Fossil Capital presents, with impressive detail and theoretical clarity, how the fossil fuel economy has come into being. Malm does not reiterate commonplaces about climate change, but looks closely at its origins. This extremely well-written book is radical without being dogmatic. Malm does not take his audience for granted at any point; there are no short cuts.