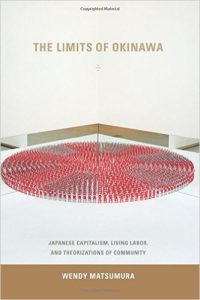 Historians on both sides of the Pacific have long drawn on Marx in order to illustrate the dramatically uneven costs and benefits of Japanese development. Wendy Matsumura’s superb book extends this effort to Japan’s southernmost prefecture of Okinawa, which was established in 1879 through the annexation of the sovereign Ryūkyū Kingdom. This so-called Disposition of Ryūkyū is conventionally portrayed in top-down terms as an act of either ethnic-national unification or imperialistic subjugation. Both portrayals assume the prior existence of an organic Okinawan community, defined through its difference from Japan. Matsumura conducts a more ground-level analysis, identifying the Disposition of Ryūkyū as ‘a moment of primitive accumulation’ geared to transform small producers into ‘creators of surplus value to fuel Japan’s nascent capitalist development’ (13-14). Drawing on diverse strains of Marxian theory, she chronicles the prewar Japanese state’s often-contradictory policies toward Okinawa and disentangles the responses of mainland Japanese capitalists, indigenous elites, and indigenous small producers. In the process, she deconstructs the concept of ‘Okinawa’ itself, demonstrating how ‘a merely coincidental and historically traceable peripheralization in the economic sphere quickly became evidence of collective difference in a cultural, racial, or ethnic sense’ (15). The result is a long-overdue bridge between the Western, mainland Japanese, and Okinawan Marxist traditions, which opens a compelling new perspective on the complex links between economic and extra-economic coercion and between ethnic and socioeconomic identities and interests.

The backdrop to Matsumura’s introduction and first chapter is the Meiji Restoration of 1868, which commenced Japan’s transformation from an isolated and feudalistic agrarian autocracy into a constitutional monarchy with an industrial economy linked into the capitalist world-system. This transformation was carried out from the top down at breakneck speed, engendering severe social dislocations and provoking multilateral resistance. In Okinawa, the most immediate subject of resistance was the indigenous ruling class, who feared that reform might erode their social privilege. In part due to this resistance and in part due to its own extractive interest, the Japanese state failed to extend the same reforms to Okinawa as to other regions. Instead, it implemented a system of indirect domination – the ‘Preservation of Old Customs’ system – in which feudal elites maintained their positions as collectors of tax-in-kind from the sugar-producing peasantry. While the ‘Preservation’ system itself was phased out in the early 1900s, it set the pace for Okinawa’s systematic underdevelopment during the 1900s-1940s as a ‘cultural, economic, and political periphery whose difference from the empire’s formal colonies was not entirely clear to observers or policy makers’ (16). Economically, Okinawa remained dependent upon sugar monoculture, and thus poor and prone to crisis. Culturally, Okinawans retained indigenous practices divergent from changing mainland norms, which enabled their stigmatisation as a backward branch of the Japanese ethnic nation. As Matsumura shows, these structural and discursive dimensions of marginalisation continually reinforced each other: the prefecture’s underdevelopment was blamed on the backwardness of its citizens, which was then cited to justify the maintenance of disempowering policies and institutions.

The book’s second through fifth chapters are studies of four successive moments of social conflict: the Miyako Peasants’ Movement against residual feudal privilege (1890s); female weavers’ self-organisation against social and industrial overregulation (1890s-1900s); small sugar producers’ creation of non-selling alliances to impede corporate monopolisation (1910s-1920s); and the embrace of Marxism and civil disobedience in response to economic crisis (1920s-1930s). Matsumura carefully differentiates between the various social factions in play, taking particular effort to debunk Okinawan elites’ claims to represent ‘Okinawa’ as a whole. This is necessary because elites and small producers had very different interests, and negotiated political and economic pressure in different ways. Urban intellectuals generally urged assimilation to Japanese cultural norms and promoted a kind of modernist regionalism called ‘Okinawa-ism’ (Okinawa-shugi), which stressed access to representative institutions and local control over means of production; more egalitarian variants of ‘Okinawa-ism’ called for communal manufacture using modern methods, while more authoritarian variants merely upheld the privilege of Okinawan capitalists to exploit their own people (163-4). Small producers, however, did not often buy into such grand strategies, preferring to respond to capital and the state on a tactical basis. This intra-ethnic divergence gave rise to palpable social tensions. An important example is the debate surrounding the ‘Movement to Reform Old Customs,’ a top-down drive to inculcate cultural practices compatible with both capitalistic relations and mainland Japanese norms. Okinawan intellectuals saw this as necessary to establish economic self-sufficiency, and were frustrated with demographics that resisted – for instance, weavers who eschewed regulation and sugar producers who clung to outmoded methods. Echoing Japanese administrators, Okinawan elites disparaged such groups as ignorant and irrational ‘feudal remnants’ (189). Matsumura argues that this was a severe and deliberate mischaracterisation, marshalling diverse sources to demonstrate that small producers acted in contextually rational ways that maximised their autonomy. She concludes that while small producers’ initiatives met with varying degrees of quantifiable success, they ‘granted [producers] the possibility of self-valorisation and, most crucially, reminded them that a different type of rationality was possible’ (181).

Matsumura’s painstaking attention to local histories gives her an excellent perspective from which to critique dominant historiographies of Okinawa, as well as historiographies of modernisation writ large. As she observes, Okinawa’s peripheralisation during the 1880s-1940s and subsequent decimation during the Pacific War gave rise to a monolithic narrative of ‘Okinawan victimization’ that persists today (24). Matsumura questions the accuracy and utility of this narrative, arguing that it assimilates diverse groups of Okinawans into an ahistorical homogenous community defined by its political failures. This ratifies prewar Okinawan elites’ attempts to speak for their entire prefecture, and implicitly devalues groups such as Miyako peasants and female weavers, who successfully organised to advance their interests on a provisional level. Breaking down the metanarrative of victimhood allows Matsumura to recover the emancipatory potential in ‘utterances, organizational attempts, literary works, expressions of desire, and small movements … the socius rather than the mode of production narrowly conceived’ (30). This provides contemporary Okinawan social justice movements with a powerful memorial resource.

Another harmful effect of the narrative of Okinawan victimhood is its aura of exceptionalism, which has blocked intersections with other fields. Matsumura proactively works past this blockage, relating her findings to thinkers ranging from José Carlos Mariátegui and Frantz Fanon to the Italian autonomists and the Midnight Notes Collective. Indeed, one critique of The Limits of Okinawa is that it sometimes calls on theorists from far afield to the neglect of those closer at hand. For instance, Matsumura mentions the existence of prewar Okinawan Marxist thinkers such Inoguchi Masao, but does not elaborate on their thought; similarly, she notes that the leaders of the Okinawa Youth League maintained links to the mainland Japanese Labor-Farmer Party (Rōdō-nōmintō), but only provides a brief explanation in her endnotes. During the 1920s-1930s, the Labor-Farmer Party mounted a compelling critique of the Comintern-backed orthodoxy of the time, arguing that meaningful change could be realised in Japan only if the peasantry joined the proletariat as self-possessed subjects of emancipatory theory and practice (Hoston 1986). Heterodox materialists like Tosaka Jun also chafed against the determinist tendencies in party-line Marxism (Harootunian 2013). Which is to say, we do not have to wait until the 1950s to see the decolonisation of Marxian thought; the process was already underway in prewar Japan. Matsumura’s use of postwar French and Italian theory to unpack the revolutionary consciousness of Okinawan small producers is adept, but might appear less arbitrary in the context of a more sustained recuperation and/or critique of prewar Japanese models.

As the first rigorous English-language analysis of Okinawan modernisation, The Limits of Okinawa is indispensible to specialists simply for the stories that it tells. However, its attention to historiography and theory makes it equally relevant to non-specialists. Like key contributions to peasant studies and human geography, it interrupts the stagist tendency in Marxist historiography, showing how economic and extra-economic coercion are perfectly capable of existing side-by-side during both transitional and mature phases of capitalist development – and indeed, how phases and spaces of extra-economic coercion often play a key role in ostensibly capitalistic valorisation. Perhaps because of the language barriers involved in studying Okinawa, it is not often cited in comparative scholarship on this global phenomenon. Hopefully, the insight and access that Matsumura provides will change this.