Marx & Philosophy Review of BooksReviews‘Idols of Nations: Biblical Myth at the Origins of Capitalism’ reviewed by Tarquin Holmes 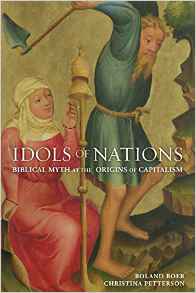 Roland Boer and Christina Petterson
Idols of Nations: Biblical Myth at the Origins of Capitalism

What is the relationship between biblical interpretation and the ideological origins of capitalism? Specifically, how did early capitalist ideologues seek to overcome the apparent contradictions between Christian morality and the pursuit of property and profit through social and ecological exploitation? This is the question which Roland Boer and Christina Petterson seek to address in this short but lively volume. The authors both have previous form in researching the historical intersection between capitalism, Christian theology and European imperialism from a Marxist perspective. The historical enigma motivating Idols regards how Christian doctrine, with its emphasis on poverty, community and spirituality, was not only accommodated with the capitalist ethic of accumulation, individualism and materialism but moreover utilised it as a means of justifying and consolidating the emerging capitalist order. To provide answers, the authors interrogate the works of four prominent early modern philosopher-economists whom they argue shared a commitment to emerging capitalist values and a tendency to justify those values through direct or indirect scriptural references. This interpretive interplay between nascent capitalism and Biblical exegetics, the authors assert, produced the collection of fables and narratives which formed capitalism’s foundation myths – myths which endure today, albeit hidden behind secular masks as ‘economic laws’.

The four selected ideologues are Hugo Grotius (1583-1645), John Locke (1632-1704), Adam Smith (1723-1790) and Thomas Malthus (1766-1834). As the choice of four authors parallels the Biblical canon of four gospel authors (a quirk that I am inclined to think is not accidental), I will refer to them as the ‘four evangelists’ of capitalism. A particular target for their Biblical revisionism is the book of Genesis, especially the story of Adam and Eve’s expulsion from Eden. This myth of the Fall, Boer and Petterson argue, was problematic for emerging capitalist ideology, for orthodoxy held it to indicate labour and private property not to exist primordially but appear instead as necessary evils of the postlapsarian world. The myth’s Calvinist interpretation, increasingly prominent in late 16th century Protestant Europe, was particularly uncompromising, holding that postlapsarian human nature was wholly corrupt and unfree (the doctrine of total depravity), being only redeemable through divine grace (the doctrine of predestination). This religious worldview was irreconcilable with the voluntarist beliefs of the Dutch proto-capitalist Grotius, who however found a more compatible theology in Arminianism. A heterodox Calvinist, Arminius rejected predestination, in preordaining the damned and saved, as attributing evil to God, instead favouring the view that evil originates through free human choices enabled by grace. The authors show this free will theodicy to have been exploited by Grotius in order to ‘soften’ the Fall, downplaying original sin and emphasising the wicked choices of Adam and Eve’s descendants. By narrowing the divide between pre- and postlapsarian worlds, Grotius could then attempt to smuggle aspects of the fallen world into the Garden. Private property, for instance, is reinterpreted as a naturalistic consequence of use, with Grotius moving from the semi-intuitive claim that food once eaten is incorporated and cannot be used by others to the claim that this applies to movable goods (e.g. clothing) and immovable goods (land), which are incorporated through use to the person of the user as property. In the mere act of consumption, Adam and Eve therefore engaged in creating property.

Boer and Petterson proceed to show that many revisionist themes and narratives established in Grotius are inherited and elaborated in the work of the other three ‘evangelists’. Locke develops a related account of property as originating out of usage, based on the claim that once resources are demarcated for personal use, they are removed from the common pool, and thenceforth cannot be returned to communal ownership (like Grotius, he dubiously extends his principle of property from the movable and perishable, e.g. food and clothing, to the immovable and enduring, e.g. land). He furthermore claims, as did Grotius, that labour is not an evil but rather necessary for human improvement, and attempts to find Biblical support by consciously conflating Genesis 3.19 (“In the sweat of thy face shalt thou eat bread”; a passage usually read as cursing Adam to labour for food) with Genesis 1:28 (“God said unto them, ‘Be fruitful, and multiply, and replenish the earth, and subdue it’”). Locke thus also seeks to soften the Fall by implying property and labour not to be curses but rather as natural and divinely sanctioned. Death is the only curse of the Fall he considers significant, ignoring not only labour but also the curses of Eve (patriarchal rule and childbirth).

Whilst Adam Smith does not obsess over passages from Genesis like his predecessors, Boer and Petterson persuasively argue that he simply secularises the arguments of Grotius and Locke, reinterpreting them using moralistic Enlightenment fables. Instead, for instance, of Eden or Pre-Columbian America (Locke’s preferred Eden analogue), Smith speaks of the ‘rude state of society’, and seeks to show that, assuming human beings are self-interested but inclined to barter and exchange, primitive communitarian society will inevitably develop into hierarchical capitalism with division of land into property, division of labour into a class system and the development of money as a substitute for barter. The debts to Grotius and Locke are here obvious. The Biblical origins of Smith’s capitalist mythopoeia are moreover evident in his multiple references to Providence and its ‘invisible hand’ as guarantor of economic harmony. Whilst often dismissed as metaphorical language, the authors maintain these references to have a serious theological content. Smith, they point out, borrowed the notion of self-regulation from natural theology, implying an assumed intentional design (and Designer) behind the market economy’s inherent tendency to translate collective individual self-interest into overall social benefit. The implication is that God still underwrites Smith’s supposedly autonomous market economy and that the theological contradictions present in Grotius and Locke’s revisionist Biblical narratives are still unresolved in Smith.

The residual contradictions within Smith’s model of the market economy are disinterred in Malthus. Unlike Smith, Malthus recognised the exploitative nature of capitalism in its creating an unequal society whose poor suffered deprivation and early death. He sought to defend not only capitalism but also God from the claim that such a society was unjust. His defence was grounded in a theory of dialectical conflict between the forces of population and subsistence. Human happiness, Malthus believed, was best attained in societies in which unrestricted population growth was possible. This accorded with God’s command in Genesis that humankind go forth and multiply, to better enable which God gifted humanity lust. But this proves a troublesome gift, for when meeting the limiting force of hunger, lust is redirected into vice, resulting in misery, poverty and depopulation. To defend God against accusations of knowingly causing evil (and to justify opposition to welfare), Malthus reverted to a strong concept of evil, maintaining that only the goad of necessity could overcome the inclination to sloth derived from original sin. He here diverges from most prior and subsequent capitalist ideology, in which evil is usually presented as a mere consequence of human error that may be overcome through correct application of economic doctrine. But by acknowledging the reality of evil in reinvigorating original sin, Malthus therefore widens the gap between pre- and postlapsarian worlds which his predecessors had tried to close to allow labour, money and property to be smuggled into the Garden. Furthermore, Malthus’ suggestion that humankind inevitably outstrips the bounties initially provided by God undermines the optimistic claims of Grotius, Locke and Smith that capitalism could improve postlapsarian society. In wanting to defend capitalism as a God-given institution whilst acknowledging the reality of its evils, Malthus was therefore forced not only to cast doubt on the goodness of Providence but also to unsoften the Fall and therefore problematise the attempt to find Biblical justifications for capitalist institutions in Genesis’ Eden.

Overall, Boer and Petterson’s analysis of early capitalism’s four evangelists and their problematic relationship with the Bible is persuasive and illuminating. However, their account has limitations, for they do not extend their critique to post-Malthusian capitalism, merely concluding that “For some serious economic theory, in which religion is transformed to become a core feature of the analysis of capitalism, we need to turn to Marx’s detailed and profound analysis”. Ending here helps the authors avoid confronting problematic later developments. Notably, whilst Smith attempts to validate capitalism using half-heartedly naturalised Biblical myths, later scientific materialism has largely rejected religious argumentation, instead offering alternative secular origin narratives. These too have been appropriated and adapted by capitalist ideology, the most influential being the perverse utilisation of Darwinian evolutionary theory to justify a societal ‘survival of the fittest’. This pivot towards scientific myth allows late capitalism to acknowledge its incompatibility with Christianity whilst insisting on its scientific inevitability. Although the authors are doubtless right that myth, as neither fully truth or falsehood, cannot wholly be secularised, and so retains a religious nature through changes of application, critique of scientific capitalist myth nonetheless requires a different set of tools compared to critique of Biblical capitalist myth. Therefore, whilst Idols successfully rebuts early attempts to ground capitalism in Biblical myth, a more definitive critique requires recognising capitalist ideology as a many-footed beast that utilises multiple mythic grounds of legitimation, therefore requiring collaborative and interdisciplinary critique. The beginnings of such a collaborative critique (as well as a positive account of how Biblical myth can be utilised for left-wing ideological means) are emergent in Boer’s previous work Political Myth, notably in his suggestion that Marxism can find in climate science a potential ally against capitalism, but this looks to require further work with regards to capitalism’s origin myths.