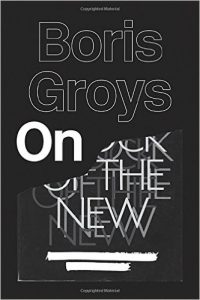 Boris Groys
On the New

`Is there any thing whereof it may be said, See, this is new?’ – Ecclesiastes

`Nothing comes from nothing; the new comes from the old, but that is why it is new’ – Brecht

Boris Groys belongs to the tradition of theorists who think and write in an artistic way. That is to say that the form and style of his work often mirrors, follows, and thinks through the formal logic of art. His critical position is above all one of negation and ressentiment – Groys admits that he is ‘in solidarity with Adorno’ in this respect (Abdullah and Benzer, 2011). ‘Much of what I write’, Groys states, ‘is a defensive reaction to certain discourses which sell and establish themselves too much as universally known and valid insights […] and out of the attempt to understand why I do not see things the way others allegedly see them’ (ibid.). On the New was written in this nihilistic spirit. G. M. Goshgarian’s fine translation of this book (originally published in German as Über das Neue. Versuch einer Kulturökonomie, in 1992) has made a key work from Groys’s cultural-theoretical oeuvre available in English. The book was written in reaction to a contemporary postmodern debate that posited the impossibility of the new in culture, theory, and politics. Against the claim that there can be nothing new under the sign of clôture or intertextuality, Groys argues that the new is in fact ‘inescapable, inevitable, [and] indispensable’ (7). There can be ‘no path leading beyond the new, for such a path itself would be new’, nor can there be any ‘possible way of breaking the rules of the new, for these rules demand, precisely, to be broken’ (ibid.). In order to demonstrate this, Groys formulates a theory of innovation within the ‘cultural economy’ that develops, chapter by chapter, through a persuasive and provocative dialectical movement. By revaluing, reinterpreting, and dialectically inverting older theories of the new, and via a playful, (anti‑)philosophical pastiche of Marx, Nietzsche, and Duchamp, Groys arrives at a novel way of understanding the new, as a product of the economic mechanisms of culture.

In the first of the book’s three parts, Groys clears the theoretical ground for his argument by first assessing what the new is, and what it is not. The new, he argues, is not simply the ‘other’ (ch.2), the utopian (ch.4), an ‘effect of original difference’ (ch.7), nor a ‘product of human freedom’ (ch.8); and neither can the demand for the new (in opposition to Adorno) be seen to originate from the capitalist market nor from ‘authenticity’ (ch.3). In order to perceive what the new might actually be, Groys suggests, one first needs to approach the problem of (cultural) value. Where does the value of a cultural work come from? (13)

One might assume that a work acquires value if it is modelled after a valuable cultural tradition: a procedure that Groys terms ‘positive adaptation’ (13, 16). Yet this necessarily leads to another question: how are cultural traditions endowed with value in the first place? This, Groys believes, is determined by what he calls the ‘cultural archives’. Contra Foucault’s ‘system of signs’ and Derrida’s ‘endless textuality’ (160 n.54), the archives in On the New are comprised of a hierarchy of public institutions such as museums, universities, libraries, and publishing houses (in our day), which structure and store cultural works in a particular value hierarchy. Indeed, it is only when a given society has developed the technical means of preserving old values – creating conditions in which a cultural tradition is widely available – that the ‘demand for the new arises’, ‘primarily’ (22). If the new, however, can only be new with respect to the old, it must of necessity break somehow with the banked values of the archives. For Groys, this is essentially how the new is produced: cultural innovation is always achieved via a rational and ‘strategic’ synthesis of ‘positive’ and ‘negative adaptation’ to the valorized cultural tradition (108). This procedure, he writes, is the fundamental form of expression of the ‘cultural-economic logic that governs culture’ itself (ibid.). The source of a cultural work’s value, therefore, is always determined by its relationship to the archives: in the measure of ‘how successful its positive or negative adaptation to that tradition is’ (17).

Groys suggests there is a constantly shifting line of value that separates the archives from the ‘profane realm’, which consists of (what is perceived to be) vulgar, valueless, extra-cultural, and primitive things (10, 64). Something becomes new when it moves from this profane sphere – a ‘reservoir for potentially new cultural values’ – to the archives themselves (64). This motion causes a radical reorganization of the hierarchy of values in the archives: that which was formerly valuable is often devalorized, cast out to the realm of the profane, whereas that which was formerly valueless is now valorized and stored within social or ‘cultural memory’ (10, 139). Thus, according to Groys, the new can only arise through an intra-cultural ‘revaluation of values’ (10, 43). The new, therefore, is always already a re-value, a ‘new interpretation, […] contextualization or decontextualization of a cultural attitude or act’ that conforms to culture’s hidden economic laws (56-7).

Here, of course, we can detect Groys’s application of Nietzsche, who is duly acknowledged as ‘the first to posit the revaluation of values as the principle informing cultural innovation’ (86). It also becomes apparent – even though there is no explicit acknowledgment – that Groys’s method of investigating and representing the cultural economy is a stylistic, and somewhat ironic parody of Marx’s Capital. (Even Groys’s footnotes rival Marx’s in terms of size!). Groys’s economy of culture, however, appears to have a privileged autonomy from the economy of capitalism. The production of the new in the cultural economy, as we have seen, can be considered to be ‘an economic operation’ in so far as an economy operates through the exchange of values (10). This, Groys argues, does not imply that culture is ‘some sort of superstructure, the external expression of hidden economic necessities’, but rather that ‘cultural logic’ functions with an ‘economic logic’ (12). Groys carefully distinguishes this conception of economy from the capitalist market: ‘The economy of sacrifice, expenditure, violence, and conquest has to be taken into consideration as fully as the economy of commodity exchange’ (ibid.). This statement can easily be turned upon its head. For instance, the incorporation of African masks by the modernists of the early twentieth-century – an example Groys draws upon to investigate the valorization of the profane – clearly cannot be reduced to a simple case of intra-cultural economic exchange. If it is presented solely in this way, it naturally conceals the history of colonial plunder, murder, and the inherent violence of commodity exchange that lies hidden behind the surface appearance of the art commodity.

As Groys goes on to suggest, in part two of the book, the ‘value dichotomy’ between the profane and the culturally valorized – an internal dynamic of innovation – is also crystalized within individual artistic and theoretical works (84). Works that are perceived as ‘radically new’ (and have the best chance of being admitted into the archives) are those that dialectically synthesize the highest, culturally valuable traditions, with the most valueless, extra-cultural things (82). An example par excellence of this procedure is Duchamp’s ready-made aesthetic technique. Groys affirms that it was through such ready-mades as L.H.O.O.Q. (a moustachioed postcard reproduction of Leonardo’s Mona Lisa), and Fountain (an upside down urinal that has evoked comparisons with classical sculpture, the Madonna, and the seated Buddha), Duchamp exposed cultural value to be nothing more than an ‘ideological fiction’, fabricated by institutions in order to preserve their hegemony of ‘cultural power’ (65-6). This is perhaps the most political statement in the book, and one that paradoxically reveals how culture is part of society’s superstructure. It is well known that Duchamp and the historical avant-garde wanted to level the art institution so as to reveal what they believed to be a hidden reality obscured behind its edifice. Rather than destroying these institutions, however, Groys rightly observes that their work merely modified the value hierarchy in the archives themselves, through the valorization of the profane (95, 147). The consequence of this historic revaluation of values, from Groys’s perspective, is that the aesthetic of the ready-made, through significant modifications, became ‘the determinant aesthetic of our time’ (95).

One of the most provocative conclusions of On the New is the apparent universality of Duchamp’s aesthetic. Groys contends that the ready-made should not merely be considered as one innovative artistic technique amongst many others, but insists, rather, that it encapsulates the general formula for the production of the new that has been practiced throughout cultural history (85-6). This is demonstrated in the final part of the book, in which the logic of the ready-made is applied to historical analysis. Through this optic, the whole development of the new in culture is reduced to a dialectical process of intra-cultural economic exchange. This form of exchange is shown, through a succession of admittedly brilliant, original readings, to have informed Freud’s Oedipus complex, Marx’s dialectical inversion of Hegel, and even (via a Kierkegaardian twist) the emergence of Christianity. In his more recent work, moreover, Groys suggests that the Internet and new forms of media have created a situation today in which we are all ready-mades now; we wander like Ulysses, from website to website, on a perpetual odyssey of valorization and devalorization (Abdullah and Benzer, 2011). It appears, from this, that Groys has turned the aesthetic model of the ready-made into a total concept: one that replaces and reproduces the universal assertions of those discourses he denounces precisely for their truth-claims. This is of course a strategic position, as much as one that arises from Groys’s refusal to see things the way others see them. By carefully following the rules of innovation that On the New prescribes – through his ruthless critique of classical, Marxist, post-structural, and postmodern theories of the new – Groys successfully fashions the newness, or rather, the intra-cultural originality of his own work. In this way, the book itself stands as a conceptual model of the new.