Marx & Philosophy Review of BooksReviews‘The Origins of Neoliberalism: Modeling the Economy from Jesus to Foucault’ reviewed by Lars Cornelissen 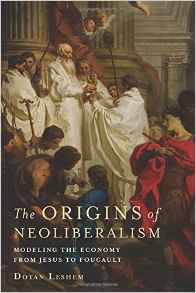 Dotan Leshem
The Origins of Neoliberalism: Modeling the Economy from Jesus to Foucault

The Origins of Neoliberalism documents a long-ignored episode in the history of Western political-economic thought: fourth-century Christian thought. It is in this context, the book argues, that several shifts in the understanding of the term “economy” occurred, which led to the redrawing of the boundaries between the three dimensions of human existence that Greek philosophers had bequeathed to Western thought several centuries before: the economic, the political, and the philosophical. It is in this period, the author concludes, that the foundations for the contemporary neoliberal understanding of the economy as a market that encompasses all spheres of life ought to be sought.

Leshem’s first monograph (which came out of a dissertation on the same topic) consists of detailed, often dry textual interpretations of early Church Fathers’ work. It is written in dense and at times jargonistic language and, with the exception of the introductory and concluding chapters, lacks adequate signposting, making it a heavy read. Despite the book’s title, readers looking for a thorough engagement with neoliberal political economy will find little of interest in these pages as the author spends very little time cashing out the genealogical relevance to the critique of neoliberalism, which is confined to the last twenty or so pages of the book. In the context of the history of economic thought, however, The Origins of Neoliberalism offers a bold and pregnant hypothesis: we must look towards Late Antiquity for several crucial semantic shifts that went on to shape fundamentally the trajectory of the history of political economy. Unfortunately, although this basic contention is worthwhile, the book is marred by several shortcomings, to which I shall draw attention below. I shall first reconstruct the book’s main stakes and its historical argument.

The author’s central aim is to contribute to ‘an ontological project of rethinking the contemporary ordering of the human trinity of economy, politics, and philosophy’ (9), a project that the author explicitly situates in the context of Hannah Arendt’s The Human Condition. Because neoliberalism, in this view, is in essence simply one inflection of a certain disposition (or, if one likes, “economy”) between the economic, the political, and the philosophical that was first developed in the fourth and fifth centuries, we must develop a critical understanding of the theoretical and historical foundations of that disposition if we are to ‘rethink and reorder the three-dimensional human space of economy, politics, and philosophy in which we live’ (153). Whether the reader finds this political argument stimulating probably depends on their opinion of Arendt’s philosophical project, which the author accepts rather uncritically.

Besides Arendt, Leshem’s primary interlocutors are Michel Foucault and Giorgio Agamben. The book seeks to ‘bring Foucault’s work [on the genealogy of governmentality] to completion’ (6) by filling some of the gaps left therein. Its most important contribution in this context is that it connects ancient Greek economic thought to patristic philosophy, thus forging a connection between Foucault’s work on the ‘Hermeneutics of the Subject’ and his lectures on modern governmentality. Leshem simultaneously contends that his work undermines the thesis Agamben develops in The Kingdom and the Glory (6-8), which argues that modern governmental power developed out of early patristic providential thought on economy and that, as a result, modern political economy is structurally providential (Agamben 2011). I shall return to Leshem’s critique of Agamben below.

Whatever one thinks of the book’s political project, its core contribution is an historical one. Accordingly, the author calls it a ‘philological’ or ‘nominalist history’ (2) of the term “oikonomia”, that is, an overview of the different meanings that have been attached to it over time. In his view, although the term’s application and meaning have changed, it is possible to abstract from these various meanings a ‘typology’ of ‘criteria according to which a model of human action is called an economy’ (3). Thus whatever its specific semantic value, “economy” has – generally speaking – always referred to a prudent disposition in the face of the human condition of excess, a disposition that in turn produces surplus. What changes in the history of economic thought is, on the one hand, the meaning and relevance of these three elements – prudence, excess, surplus – and, on the other, the domain that is considered economic. In ancient Greek thought, to give but one example, the household (or oikos) is the domain where economic activity takes place, and in that domain one must act prudently in order to harness the excess found in nature so that one may arrive at a surplus that allows the master of the household to take part in political life (14-17; cf. 154-155).

Having set up the argument in this manner, Leshem proceeds to trace how the definition of “economy” changed and how, as a result, the boundaries of what was considered the economic domain shifted. Concretely, he discusses three pre-modern ‘models’ (10) of thought concerning economy: the ancient Greek model, the imperial model, and the Christian model. The articulation of the “trinity” of human activity – again: politics, economy, philosophy – is interrogated for each model, which brings into focus the manner in which the reach of the economic dimension gradually increased. Come the third model, which emerges between the Council of Nicea (in 325 CE) and the Council of Chalcedon (in 451 CE), the economy has usurped the other two dimensions, and as a result, the novelty of the Christian moment vis-à-vis the previous two models is that it ‘include[s] all spheres of life in the economy instead of generating political and philosophical spheres that are “economicless”’ (28). In the Christian model the domain of the economy refers to the Church, or the society of believers, to which political and philosophical life are subjugated absolutely.

Having related the history of the three different stages that the term “economy” passed through in pre-modern times (in chapters 1-5), the author moves on to argue – in relatively few pages – that the neoliberal model, in which ‘[p]eople’s lives as a whole, including their political lives and their desire for God, are […] economized’ (167), is in fact ‘a radicalization of the Christian theory of economic growth’ (168). The point here is that in the neoliberal model the definition of “economy” – that is, the disposition it posits between the elements of prudence, excess, and surplus as well as the domain it considers economic – has remained virtually the same as it was in the Christian model (169-170). As already observed, this part of the book crucially lacks a detailed engagement with neoliberal thought, or, for that matter, with the trajectory that the patristic model followed in the period between the Council of Chalcedon in 451 and the publication of The Wealth of Nations some 1300 years later.

The book’s historical argument is a bold one, because if it turns out to be correct, it succeeds in displacing attention from modernity to the pre-modern period discussed here. If, in other words, it is true that fourth century philosophy and theology saw the effective economization of all domains of life, then this puts the standard story about economization – told in different ways by such thinkers as Karl Marx, Max Weber, Carl Schmitt, Hannah Arendt, and, more recently, Wendy Brown – in a different light. The focus should no longer be upon how modernity constituted a radical break with pre-modern thought, but upon how modernity secularized patristic and scholastic models and thus failed to rid economic thought of its theological structure.

This brings me, finally, to some of the book’s shortcomings. For if I am correct in seeing this last point as its crucial contribution, then I am at a loss why the author believes that his work ‘renders Agamben’s genealogy [of economy and government] meaningless’ (7). If anything, The Origins of Neoliberalism supports and bolsters the basic argument developed in The Kingdom and the Glory because both works show that our understanding of contemporary political-economic thought must rely upon a thorough understanding of patristic thought.

More crippling to Leshem’s own enterprise is that his tactic of tracing shifts in the meaning of the term “economy” – that is, of developing a “nominalist history” – starts to crumble almost immediately when he grounds his method in what amounts to an essentializing move. That is, because it identifies at the outset a core “typology of criteria” that all semantic variations of the term “economy” conform to, thus arriving at its ‘core invariant meaning’ (3), the book comes to appear as an exercise in making history fit that argument rather than as a genealogy of the present. Leshem seems to be aware of this problem when he admits, in the concluding chapter of the book, that he did not find the notions of excess and surplus in texts belonging to the second, imperial model (155), implicitly undermining the idea that “economy” has had an invariant meaning from Greek thought onwards. (I would add that one is similarly hard-pressed to find the notions of “prudence” or “surplus” in the neoliberal model, that is, in the political economy of an F.A. Hayek or the human capital theory of a Gary S. Becker.) Surely, a convincing genealogy should be able to account for the transformations that took place in a given semantic nexus (such as, in this case, “economy”) rather than presuppose a “core invariant meaning” in the term that is under interrogation.

In sum, The Origins of Neoliberalism demonstrates that histories of economic thought can no longer ignore pre-modernity and that political economy owes more to theological rationality than its modern exponents are willing to avow. While it remains less than convincing in its engagement with contemporary interlocutors or with neoliberalism, these shortcomings do not render empty this basic historic insight.