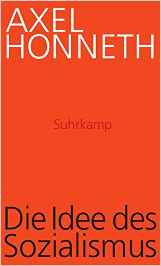 Tomas Stølen has a PhD in philosophy from The New School for Social Research, New York. …

Not since the end of the Second World War has the dissatisfaction with social and political consequences of capitalism been greater. Yet, unlike previous periods of discontent, our day and age shows few signs of political imagination and creativity. While many people today feel angry and disillusioned with the market economy, they are unable to envisage an alternative conception of how to organise society. The socialist utopias of the nineteenth century are now long gone, and nothing of substance has replaced them.

This is how Axel Honneth describes the current situation of socialism in this prescient book. It can be viewed as giving a more political edge to his previous social theoretical elaborations in Das Recht der Freiheit (2011), but Honneth’s intention is not to find a political strategy for how socialism can become more influential again. Rather, the book contains what he calls “meta-political” reflections (21). The purpose is a) to explain why socialism seems to have lost its appeal, and b) to ask which changes the idea of socialism has to undergo if it is to be a serious alternative to capitalism.

Honneth begins with a reconstruction of the original socialist idea – aptly described as the “spiritual child of capitalist industrialisation” (23) – as it begins to appear in the first decades of the nineteenth century. Three emerging socialist factions are of particular importance: the movements led by Robert Owen, Henri de Saint-Simon, and Charles Fourier. Although it is true that these first socialists aim at an economic reorganisation of capitalist society, Honneth wants to avoid reducing their common motive to the redistribution of resources as such. He underlines what he sees as a moral drive stemming from witnessing poverty and suffering among the new working class. The French Revolution provides the normative ideals: freedom and fraternity are the principles guiding the first wave of socialists. Honneth claims that equality, the third revolutionary principle, is of less prominence at this stage. Much more important than economic redistribution of wealth, is the attempt to make the liberal notion of freedom compatible with a notion of solidarity.

This is no less the case with the second wave of socialists, such as Louis Blanc and Pierre-Joseph Proudhon. According to these thinkers, social conditions will not improve as long as individual freedom is perceived as the pursuit of self-interest. The normative ideal of fraternity or solidarity will never thrive alongside such a limited concept of freedom. Blanc and Proudhon therefore regard it as paramount that freedom is reframed as a social concept if the normative demands of the French Revolution are to be actualised. But Honneth points out that none of the socialist theorists mentioned so far are able to succeed in establishing such a notion of social freedom. This is first achieved by the young Karl Marx. In his early reflections on James Mill, Marx draws heavily on Hegel when sketching how the means of production could be reorganised if the members of society were unified by mutual recognition. Freedom and solidarity can be merged if everyone views their ends as entwined with the ends of others; the realisation of individual self-interest thus becomes dependent on mutuality, not utility. While Marx might believe himself to be successful in expanding the concept of individual freedom according to the requirements of solidarity, Honneth doubts if he is any more successful in doing so than the others.

Honneth perceives the basic problem to be that all of these socialist projects are too closely associated with the “spirit and culture of industrialism” (51). This is also the reason why socialism has faded as a viable political aim in the course of deindustrialisation. Honneth brings particular attention to what he regards as three birth defects that have been inherent to socialist thought from the outset. The first such defect has to do with restricting the question of social freedom to the economic realm while ignoring political will-formation. Only if the capitalist market economy is abolished, the early socialists argue, can social freedom prevail. The democratic ideas flowing out of the Enlightenment and the French Revolution disappear out of view. The same goes for liberal rights and the institutions upholding them, so that “neither the autonomy of the individual nor the intersubjective exploration of a common will is left with a legitimate place” (62). It would have served the early socialists well if they had taken inspiration from Hegel’s theory of freedom. Liberal rights could then have been recognised as a necessary precondition for social freedom, not a hindrance. Such a turn might also have made it possible to include democratic will-formation into the notion of social freedom, Honneth claims.

The second birth defect Honneth is at pains to point out is the idea of a common interest in overturning capitalism. Saint-Simon and his followers presuppose that everyone from worker to manager is waiting to be emancipated from the old property relations, whereas Owen, Blanc, Proudhon, as well as Marx limit this common interest to the industrial working class. Honneth contends that with the increased differentiation of society, a consequence of which is that industrial workers have diminished in numbers and importance, such a presupposition has only harmed the socialist idea. As long as the socialist idea is closely associated with the common interest of a particular revolutionary subject, the loss of the latter puts socialism in danger of losing its reason to exist because “without the dependence on a social force […] it would like every other normative theory just assert an ideal against an undiscerning reality” (71). Socialism today has the choice between either becoming a mere normative theory or finding a replacement to lost bonds with the working class.

The third and last birth defect discerned by Honneth, is the idea that the demise of capitalism is an historical necessity. With the exception of Owen, whose interest in direct action prevents him from such speculations, most early socialists understand themselves as participating in an unavoidable historical process. Marx, of course, views history as a developmental progression towards a socialist society in which all previous contradictions are dissolved. Honneth regrets to point out that due to adopting such a view, socialism is as dogmatic about its historical purpose as laissez-faire liberalism, thus making “every experimental dealings with historical processes and potentials impossible” (72).

After having given an account of the original socialist idea and pointed out three major weaknesses inherent to it, Honneth attempts to re-establish a notion of socialism for our times in two subsequent steps. The first step consists of replacing the historical necessity presupposed by classical socialism with a notion of what Honneth, drawing on John Dewey, calls “historical experimentalism” (85). He insists that socialism can only have a future by adopting a post-Marxist shape. Instead of promising a perfect society that will eventually break through at some point in history, socialism should concentrate on the ideal of democratic will-formation. One consequence of this move is that Honneth allows for different economic arrangements – neither a planned economy nor a free market is presupposed. It is up to processes of will-formation to experiment and decide how to organise society. Pragmatic problem solving replaces the misguided trust in historical laws. Due to its inclusiveness and stress on open communication, such an experimental attitude also replaces the untenable faith in the working class as the sole driving force for change. All strata of society are included in the experimental process, a contention which is, as Honneth admits, at odds with the original socialist idea.

In order to make room for experimental processes within a socialist framework, the second step undertaken by Honneth consists of developing an idea of democracy as a life form. This requires that socialism abandons the exclusive emphasis on economics and instead adopts a more differentiated understanding of modern society. In addition to the economic sphere, there is the political sphere and the private sphere. These three spheres have to be accounted for on their own terms; neither the democratic will-formation of political life nor the personal relations of private life can be defined by the economic sphere. All three can make room for solidarity and cooperation in their own ways, while simultaneously forming a concerted whole. Honneth suggests an organic view of society in the manner of Hegel in which the three spheres influence each other in “forceless reciprocity” (145). The political sphere does have a certain priority, though, for only here can citizens voice their concerns and needs. No particular group has special status as a driving force for the kind of socialism Honneth envisages; every citizen has a voice to be heard.

Albeit somewhat repetitive at times, the text is an easy read due to originally having been a series of lectures. The discussions could have been more thorough and technical, but this would inevitably have restricted the readership to scholars only. The book is not intended for specialists only, nor should it be: renewing socialism is a project that ought to be appreciated far beyond philosophical circles. The “new” socialism Honneth presents is clearly closer to liberalism and pragmatism than to traditional Marxism. He advocates a reform of the current order by democratic means, not lofty dreams of a revolution spurred on by a particular segment of society. The attempt to merge socialism with some sort of pragmatic liberalism is indeed thought-provoking, whether we agree with the project or not. However, it is remarkable that the discussions of democratic will-formation do not take the discourse ethics of Jürgen Habermas more into account. Juxtaposing Habermas and Dewey would presumably have strengthened the argument in favour of historical experimentalism. Furthermore, the manner in which capitalism actually influences – or rather, infringes – on the private lives of people as well as on the public sphere, remains insufficiently discussed. In this book, Honneth limits himself to giving an outline of a political idea and does not provide a comprehensive normative theory of society. But arguably such efforts are of little help if basic pathologies, which elsewhere are such an important topic for Honneth and Critical Theory generally, are not made into a core issue.